We can’t get over Pro Wrestler John Cena’s Proposal to longtime Girlfriend Nikki Bella in front of 70,000 Fans | Watch 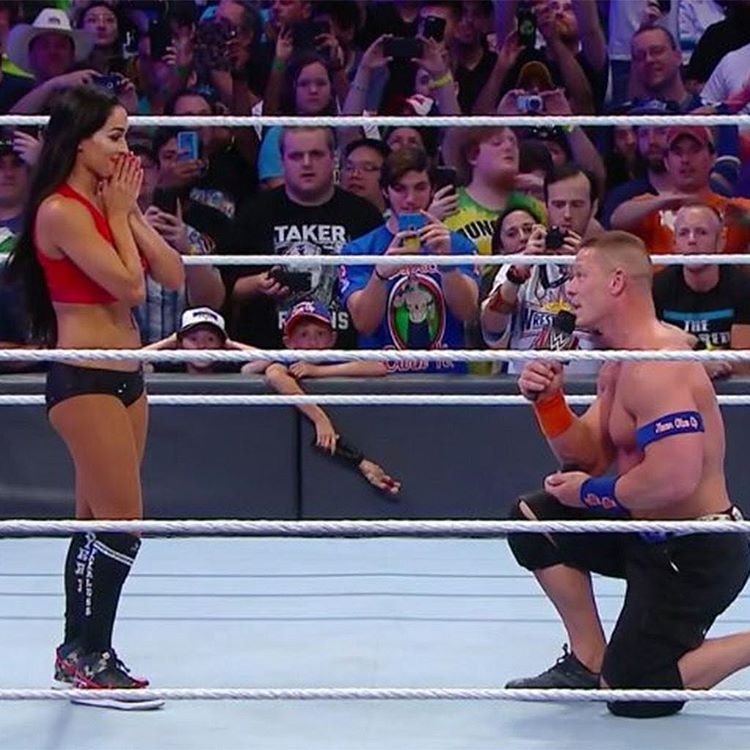 The cutest proposal happened at the WrestleMania  event on Sunday night right after pro wrestling champion, John Cena and his longtime girlfriend, Nikki Bella defeated rivals The Miz and Maryse (who by the way are a married couple) in a tag team match.

Right after their winning smack-down, John got down on one knee and popped the “will you marry me” question in front of thousands of fans. The moment got sealed with a kiss but what got the fans raving was the conversation that ensued between them both

Cena: You were kinda glassy, in and out. At the last moment, can you hear me?
Nikki: Yes
C: I only have one question
N: What is it?
C: Do you know one day I’m going to marry you?
N: Yes
C: I just need you to say yes one more time

The 39-year-old WWE legend then went on to produce an engagement ring box. He continued

I’ve been waiting so long to ask you this. Stephanie Nicole Garcia-Colace, will you marry me?

The shocked Bella answered him with a kiss.

Cena divorced his first wife, Elizabeth Huberdeau, in 2012 after which he started seeing Nikki. He has previously spoken about being reluctant to get married again or have kids.

Watch the proposal video below

So Sad! Man Loses his Days-Old Son Due to Poor Health Care