Dotun's Starta Sessions: How to Achieve More with Less Time 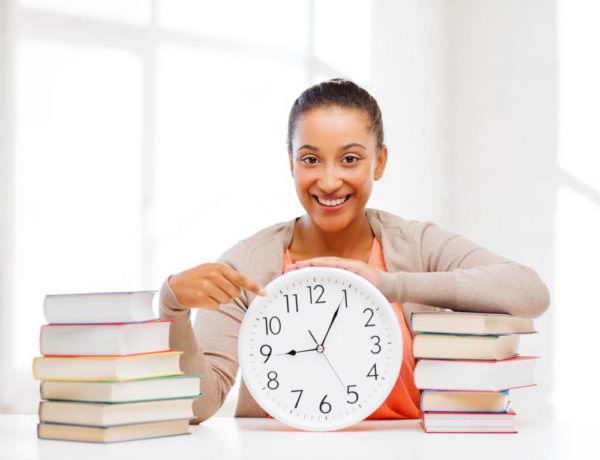 It’s easy to look busy yet be taking the piss.

Just ask the average low level employee in any average company. They’ve perfected the art of sitting at a desk, looking deep in work, while in reality, all they’re thinking about is how to crack that next level of Candy Crush.

But top performers bring their A game to work. They can’t afford to be goofing around.

Everyone is faced with choices everyday. You will be required to make tens of decisions, many of which will have lasting impact on your business and the lives of others that are dependent on you.

Perhaps, the most important of those choices is how to spend your time, because time is a limited resource. It is more important than money.

It is possible to multiply money, but you can’t multiply your time.

Your ability to deliver results within a short time is directly proportional to your chances of success.

Average people try lots of time-management techniques in order to do more. The winners accomplish more by doing less. They focus on the 20% tasks that will yield 80% of the results. And at the end of the day they achieve 10x productivity above the average joneses.

Because staying productive is a tough bend to negotiate, especially with so many legit things vying for your attention, you must learn how to prioritise (and prioritise effectively).

Urgent versus Important
It’s easy to get caught up in activities without examining how much of a dent all that busyness is making. To win, you need to identify and separate between what is urgent and what is important amongst the tasks in your inbox.

Urgent tasks are those that have to be dealt with immediately. Things like phone calls, tasks with impending deadlines, and situations where you have to respond quickly. Responding to an email, when you have to do it, is usually an urgent task.

Important tasks are the ones that actually move the needle either immediately or in the future. They have direct contribution to your missions and goals. Things like meetings with clients, strategic partners, hiring talents, closing a deal or launching a new product.

The problem is that important tasks usually get trumped by urgent tasks.

Let’s face it, there will always be more urgent tasks than you have time to accomplish, no matter how hard you try. Everytime you say, “[X] is really important, but I don’t have time for it right now” you’re making that trade-off between important and urgent.

So if you’ve got a limited amount of time in your day, how can you make sure you set aside time for important tasks? Here are the things you can do. 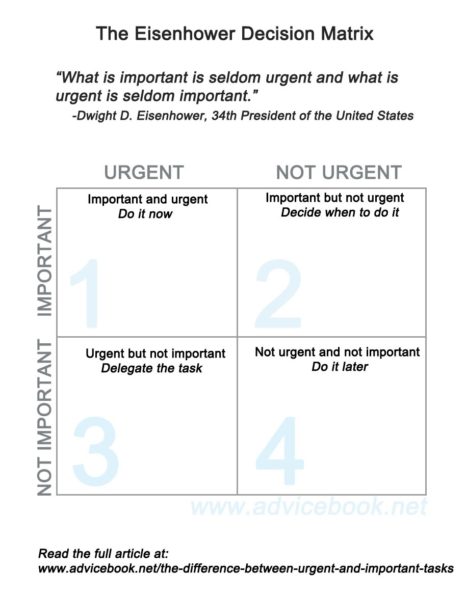 Dwight Eisenhower was the US President between 1953 to 1961. He designed a methodology for organising his tasks.

His matrix separated actions based on four possibilities.

Deadlines are what grants any task a sense of urgency. The fact that you have to deal with them ASAP, or else is good for getting things done. A lack of deadlines is also often what makes important tasks so unimportant. They’re usually the kind of thing that you can get to “eventually”.

On the other hand, your goal of getting in shape is important, but it’s not urgent at all. Do you have to make it to the gym by the end of the month? Probably not, except you are training for the Olympics.

So the first thing that you have to do if you want to make sure important tasks get done is to set deadlines.

An important task is almost always a huge set of tasks (they’re often more like projects) and in order for you to set a deadline you first have to break it down into smaller tasks and set deadlines for those.

In the book ‘Getting Things Done’ David Allen said this “Most people feel best about their work the week before their vacation, but it’s not because of the vacation itself. What do you do the last week before you leave on a big trip? You clean up, close up, clarify, and renegotiate all your agreements with yourself and others. I just suggest that you do this weekly instead of yearly.”

Set a deadline on your important tasks.
Make sure missing deadlines has serious repercussions.
Let’s say you told yourself that you will be going to the gym twice a week, and you don’t. There’s basically no serious repercussion for failing to hit that deadline.

So how do you fix that. Here’s how:

One way to make a deadline more serious is to state it publicly.

When you’re publicly accountable to a deadline, there is little room for you to argue yourself out of it. Your mind tells you that you will have some explaining to do if you don’t do what you’ve promised. That ‘explanation’ becomes the repercussion you want to avoid.

Second, create a system of reward and punishment.

Our brain is wired from childhood to optimise for reward and against punishment. Make your deadline more serious by setting up ‘carrot and stick’ system that celebrates your wins and call you out for not doing what you are committed to do on time.

Put these set of rewards and punishments in place ahead of time and make sure you’re not the person responsible for actually executing it. Make the punishment cost you something and the reward something you will really appreciate.

The goal here is not to optimise for volume of work. Rather, you want to accomplish more by doing less within a short time. That is the game of top players.

BN Weddings Video: Watch The Hannah and Olu Love Story + Follow Every Stage of Their Journey to I Do!

Dotun is the Managing Partner at Starta, a platform that makes it easier to build, discover and track high growth businesses in Africa. He is the founder of Yhello Technologies (previously meals.co.uk) an on-demand food delivery platform in the UK. He is the host of ‘Building the Futurepodcast - One-on-one interviews with Africans that are using technology and entrepreneurship to shape the African future. Dotun has a PhD in environmental management and worked as a Post-doc Research Fellow, but found it more interesting to be a startup pirate than join the academic navy.