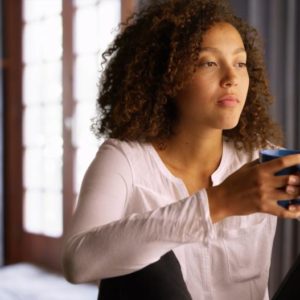 What You Know About Becky
Phillip and I met at a charity dinner two years ago. As an actress I was asked by the organization to help coach autistic kids for a play that would be performed during the event. It was an amazing experience, those kids were really talented.

Aside from acting, some of them were great painters too. Their works were being auctioned during the event. There was a beautiful painting of a lonely black bird on a tree branch, watching the sunset. I was determined to have it. Phillip was also interested. We were in competition for who would be the highest bidder. He won – collecting the artwork for 300,000 naira.

After the dinner, I walked up to him and joked about how I would come over to his house to steal the painting. He laughed. Then he said, “If you love the painting this much you can always visit me to see it.”
We exchanged contacts.

A few days later, we were at his house sipping red wine and talking about life. I didn’t steal the painting, but that night he stole my heart.
Most men I had come across claimed to love me but what they really cared about was my body, my fame, they never really understood me… but Phillip did.
We had a strange connection; almost like old souls that were once in love and suddenly found each other in a new world.

Our love was effortless. He always made me feel safe.

We were engaged a year later. It was all over the news. An actress engaged to a business tycoon. Most people wrote about me, claiming I was after the money. They called me lucky but money was not what attracted me to Phillip. We were both philanthropists. We shared the same dreams of developing Nigeria. We believed in spreading love and happiness, creating a world where little children could do what they love.

Just like me, Phillip’s parents never supported his dreams; but we both worked hard and believed in ourselves to make a name for ourselves. We wanted others to have that.
I still have visions of our wedding day playing in my heads over and over. Saying ‘I do’ to the man of my dreams, the man I loved was going to spend the rest of his life with me.

Everything was perfect until one evening when Phillip didn’t come home. He usually went on business trips but never without informing me. I called his phone but no answer. My favourite programme was on that night but I couldn’t focus. Fear crept into my mind. Maybe it was instincts. I just knew something was wrong.

Hours elapsed and still no sign of him. No calls. No footsteps. I prayed to God that my husband would come home to me.

The following morning, I called his parents to ask if they’ve heard from him. They hadn’t. Even his siblings hadn’t. No one knew where he was. That was when I involved the police.
After further investigations the police informed me that my husband was with my close friend, Becky.

The Truth About Becky
I knew when everything changed. I’m not stupid. I knew he wasn’t as busy as he claimed to be. The truth was scary, I tried to live in denial but it was so enormous to ignore. It consumed me like an ocean, suffocating me, filling my mind with doubts. No matter where I looked, no matter what I did, I couldn’t escape it.

I saw the messages on his phone. My heart burned with rage that night. Have you ever been so sad that you can’t even cry? You just shiver.

The thought of it almost drove me insane.

I went to 1004 where Becky lived. Flashed fake smiles and told jokes. She laughed not knowing it would be her last.

The wine she drank was poisoned. As soon as her eyes closed I sent Phillip a message with her phone. I asked him to come around. I told him I would leave the door open for him and he should make his way to the bedroom that I will be there waiting. I turned off the lights.
He was there in thirty minutes.

“I know you don’t like quickies,” he said. “but I have an early flight tomorrow.” His footsteps grew louder.

As soon as he walked into the room, I drove the knife into his stomach. With a quick swing I took it out again and drove it into his chest. I kicked him in his nuts. Rage engulfed me; I don’t really remember what else I did, but I made sure he felt the pain and shock I felt when I learnt the truth.

I remember him falling down to his knees and me kicking his head before I ran out.

I drove straight home and it sounds crazy but something felt good in me. My hands were shaky from fear and excitement. I arrived home and cleaned myself up.

I paced around to plan what to tell his family, what to tell the police. Tomorrow Becky would wake up to find Phillip dead in her house. When they learn of her pregnancy, they would assume that she killed him after a fight. Becky would be imprisoned.

“I won’t be a victim,” I said as I poured myself a drink. I put on some music and danced around.

Tunji Andrews: What Building Lean Muscles Taught me About Entrepreneurship

HaroldWrites: 5 Tips For Successfully Living Alone for the First Time