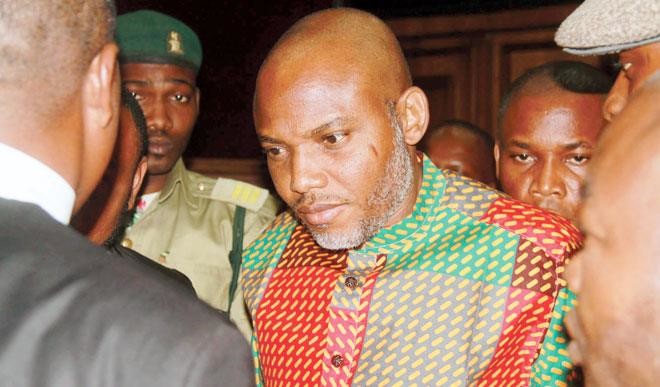 The Indigenous People of Biafra (IPOB) has released a statement saying they’ve have uncovered a plot by the Department of State Services (DSS) to cause confusion between them and Christians in Igboland by portraying their leader Nnamdi Kanu as Jesus Christ.

According to Punch, the statement was given by IPOB spokesman, Comrade Emma Powerful, who said that DSS is in collaboration with some politicians.

He said the plan came about after Nnamdi Kanu announced the boycott of elections in Anambra State.

We, the members of the Indigenous People of Biafra, under the leadership of Mazi Nnamdi Kanu, have observed with great dismay the plan by the DSS and some politicians to cause misunderstanding and confusion between the IPOB leader and Christians in Igbo land.

Since the announcement of the election boycott in Anambra State, the Federal Government and its agent, the DSS, has mapped out strategies to destroy and tarnish the image of Nnamdi Kanu and IPOB in general.

Those using his name as saviour, messiah and Jesus are misinformed because he never asked them to do so. Nnamdi Kanu has said he should not be compared with God Almighty and nobody can prove that he wants people to compare him with Jesus Christ – it is dangerous comparing him with God Almighty or Jesus Christ.

It is the work of enemies planted within us by DSS and some politicians. Those involved in this ridiculous defamation of character will fail. Nnamdi Kanu has never in his life challenged the authority of God Almighty who created Heaven and earth or Jesus Christ, the son of God.
It is very pathetic that the enemies of Biafra, IPOB and Mazi Nnamdi Kanu will use his name on Facebook and other social media platforms to cause disunity with the Christian faith.

One Facebook user Chukwudi had compared the IPOB leader to Jesus Christ, saying, “Our Supreme Leader Mazi Nnamdi Kanu is bigger than Jesus…. You must accept Mazi Nnamdi Kanu as the messiah and the savior of our land for you to inherit the kingdom of Heaven.”
Related Topics:BiafraDepartment of State ServicesEmma PowerfulIndigenous People of Biafra (IPOB)NigeriaNnamdi Kanu
Up Next