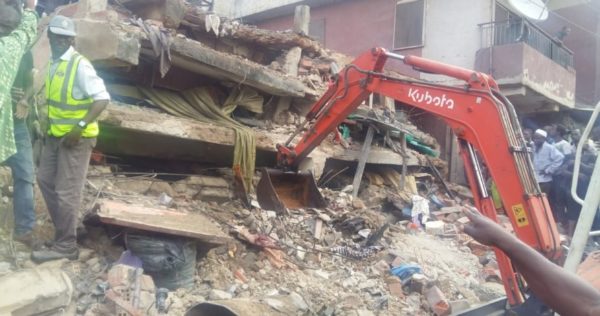 A four-storey building located at No. 3 Massey Street Lagos Island has collapsed.

According to Daily Trust, the building, it was learnt, came down at about 2:43 pm and many occupants are still trapped in the rubble.

The Nation reports that 16 persons have been rescued alive and several others are still trapped.

While the fatality rate remains unknown, Daily Trust reports that one dead body has been recovered.

The Nation reports that one woman, identified as Iya Ibeji and her four kids are believed to be trapped under the debris.

A food vendor, who stepped out of her shop minutes before the collapse escaped, but her employees and customers were trapped.

Although operatives of the Lagos State Emergency Management Agency (LASEMA) got to the scene early, the crowd prevented them from carrying out their duty. The crowd also threatened to deal with journalists recording the incident, The Nation reports.

Speaking to journalists, LASEMA’s General Manager, Adesina Tiamiyu said: “Honestly, it will be inappropriate for me to grant any interview now because people are trapped under the rubble. Besides, I can’t give you any statistics yet. I know that over 10 persons have been rescued.”

“You can see how tense the environment is. The people are not cooperating and I wouldn’t want to add more tension by upsetting them. I will grant interviews when we are sure no one is trapped underneath the debris,” Tiamiyu added.

Residents told The Nation that a telecommunication mast was erected on the building two weeks ago, adding that the building was structurally defective.