Mercy Abang: Nigeria Has More than 10.5 Million Children Out of School... Let that Sink In

Bintu Imam is only 12 but her formal education might be officially over. The young girl has become breadwinner for her family.

The 13-year-old Bintu, from a household of 5 children, hawks groundnuts along major roads in the Maiduguri city centre, capital of Borno State in northeastern Nigeria. It is also the epicentre for the conflict being masterminded by the Islamist sect, Boko Haram.

Her trade takes her around motorparks, bus stations and busy shops to market her wares. Exactly four years ago, Bintu, was schooling in Gamborou Ngala local government but the “conflict, and abduction of school girls scared me – I don’t want to be killed”, she says, as she grips firmly to her tray.

Bintu’s parents, like other families lost their livelihood and fled. Her school was shut down as a result of the frequent attacks on schools by the insurgents.

“Boko Haram doesn’t like western education, if you go they bomb you or slaughter you”, she says.
Bintu is still very frightened. “The idea of schooling reminds me of them”, and she says referring to Boko Haram sect without calling out their names.

Long before the infamous kidnapping of 276 Chibok schoolgirls that led to the launch of a social media campaign around the globe, including high-profile figures and celebrities, calling for the girls’ rescue by via the #BringBackOurGirls advocacy campaign, school girls were being kidnapped and forced into marriages.

Her friend, Grace, aged 14, who left school and has since never been seen by her parents. She just simply disappeared. Her and Bintu left for school together one day but never made it back home; it is assumed she had been abducted by Boko Haram, a case similar to most households with missing person’s accounts in the region.

Missing persons’ reports in Borno state are now a common phenomenon since the beginning of the insurgency.

Over 2,295 teachers have been killed and 19,000 displaced, and almost 1,400 schools destroyed since the beginning of the Boko Haram crisis in 2009. Three million children in the northeast are in need of support to keep learning, according to a 2017 UNICEF report.

Beyond the Boko Haram crisis in the northeast, Nigeria already has the largest number of children out of school in the world – over 10.5 million . “Among primary school-aged children not in school, only 5% are dropouts: three-quarters of them will never step foot in a classroom, and the majority are girls”, reads the same report.

Kole Shettima, director of the MacArthur Foundation laments about the situation. “In Borno State, for instance, more than half of the children of school age are roaming the streets, while about 60% of the schools have been closed.” 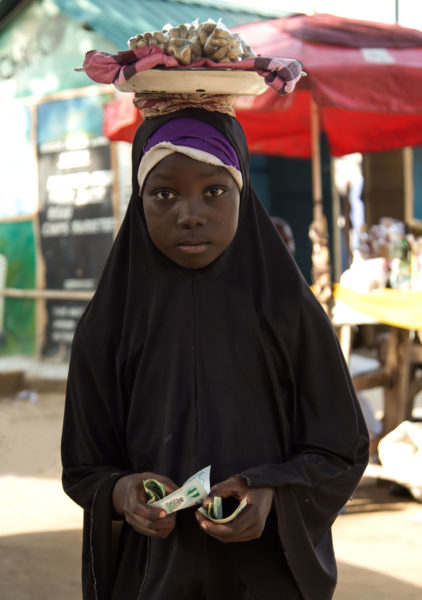 Millions of Nigerian children suffer some form of physical, emotional or sexual violence – and in most cases the girls are kidnapped, sold out or forced into marriages and the boys are killed or recruited to join the sect.

“If you send your children to school, Boko Haram will kill them”, 35 – year- old, Hajia Fatima, Bintu’s mum, says. “I’d rather my kids survive than watch them being killed because of education.”

Fatima, a mother of four, has no education. She had hoped her kids will go to school but the fear of losing them to Boko Haram discouraged her. Her children are also scared and currently hate school.
“Going to school is still not safe,” she says in her native Kanuri language. The attacks are minimal now, compared to what it was four years back but the after-effects still linger on.

It is a similar story in Yobe state. Long before the Federal Government shutdown some unity schools in Yobe and other Northeastern states, parents had been withdrawing their children from those schools for safety reasons. This was because many pupils have become targets of the deadly Islamic sect.

33-year old Usman Bawa, an alumnus of Federal Government College (FGC) Buni Yadi, lost his brother on February 25, 2014. It was the day the sect killed no fewer than 59 pupils when it attacked the school. It’s been three years since the attack but parents are still traumatised to send their kids back to school.

Bawa explains that apart from the unaccounted number of missing students, the carnage carried out by Boko Haram for 4–5 hours through the night, saw the terrorists slitting the throats of schoolboys in their sleep.

“The insurgents moved around identifying those with pubic hair and knifing them to death. They burnt every existing structure – there were 28 buildings in all – that was my school, my alma-mater”, he sobbed.

Now a civil servant, Bawa reiterates that the prevailing attitude in the area is that low-income earning parents aw the need to educate their wards, having come from an educationally disadvantaged region in Nigeria, before that night’s attack.

Sending children to Potiskum boys for most families was like insuring the future of those kids – that school for parents was likened to pension and gratuity for them, as the hope is that their lives will be better when the kids are schooled”.
The Yobe state government and the Joint Task Force (JTF) had assured parents of their children’s safety before the Buni Yadi attack. The attacks on neighboring schools by the insurgents had led to repeatedly warnings by parents’ who feared for their wards and wanted them out of the schools. But some parents took solace in the government’s assurance and left their children in school. Some withdrew theirs but when the terrorists invaded, they moved the girls to the mosque and slaughtered the boys one after the other.

As a result, parents are wary of sending their children to school in the community. The insurgency has increased the number of out of school children in Northern Nigeria, regardless of gender and could eventually culminate in sustaining the existing poverty levels of the people.

“Nigeria is the richest country in Africa, but has more girls out of school than any country in the world,” said Nobel laureate Malala Yousafzai during her recent visit to Maiduguri. “Studies are clear — educating girls grows economies, reduces conflict and improves public health. For these girls and for their country’s future, Nigeria’s leaders must immediately prioritise education.”

When people are forced from their homes, schools and communities by conflict, AYAHAY Foundation, an Abuja based non-governmental organization, keeps them closer to learning facilities by providing make-shift structures to accommodate as many as 50 children in one class. The foundation builds learning facilities in the various IDP camps, from Borno to Adamawa and Abuja – teaching women and children basics so they are not out of touch of the academic calendar during their time in the camps.

Executive Director, Maryam Augie-Jibrin explains why her organization targets children between age 3 – 6 years. “Our curriculum has a strong focus on ensuring that the children are learning the basics while taking into account the difficulties that exist as survivors in displaced camps, we’ve provided counsellors and school feeding program to serve incentives for the kids to attend classes”.

“Some of the parents cannot afford to pay fees and their children have never been in school before”, Mrs Augie-Jibrin further adds, “But with the classes put in place by the foundation, the children of the poor in these camps are being taught the basics”.

But the numbers are staggering. UNICEF estimates that nearly 1 million school-aged children like Bintu, have been forced to leave their homes and communities as a result of the ongoing violence. Will help from AYAHAY and other nonprofits reach them or all: or will Boko Haram’s goal to keep these children away from access to Western education be actualised?
The jury is still out on that.

Exclusive: ONE Ambassador Bisola Aiyeola on Why Every Girl deserves an Education, #SGIT, Motherhood, Love & Music

Akpo Uyeh: 12 Types of People You Find in the Banks