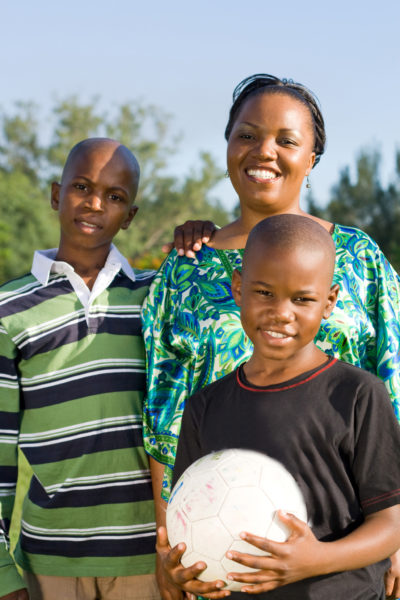 Alero was a tiny woman with five huge sons. At least they got the height from their father. Papa Jirin didn’t leave much for his children; he certainly gave nothing good to his wife. He gave her beatings with a special cane reserved for the nights he turned up drunk from work. He gave her itchy vagina at least once in two months, and when he eloped to Spain with a white woman and returned five years later with racking tuberculosis and AIDS, he gave her his pale, shrivelled, dead body.

At the time her boys didn’t look as forbidding. In fact they were puny, malnourished midgets – skinny, and at the mercy of hypothermia and infections. Alero wiped the bottoms and noses of rich fat children and washed never ending piles of soiled laundry to feed her boys till they became plump and jolly.

The boys grew and Alero had to fight demons more sinister than hypothermia and infections. There were young girls who teased her sons with their ripe vibrant bodies. There were cultists who threatened and enticed them for initiation. There was street football, pick pocketing and experiments with cigarettes, sex and booze. In a neighbourhood infested with big black rats, sour drains, hopelessness and crime, Alero whipped, fought, cried, cajoled and blackmailed her sons till they got in line.

A decade later and her sons were doing well. The eldest was a proud accountant in a prestigious bank. The second son was a medical student, and the others were in varying degrees of university education. All the boys bore close resemblance with their mother, but mercifully they were all spared her smallish frame. They were tall and impressive, very fine gentlemen, home trained. They were the envy of the entire neighbourhood and even in the village, so much so they were referred to as
“Alero’s boys.”

For Alero, this title was a trophy to her hard work and diligence. It was a grand and somewhat apt summation to her trials and joys of motherhood. These fine gentlemen were not “Jolomi Wofe’s boys” or “Papa Jirin’s sons”.

The silly, no-good of a husband claimed no ownership to her boys, in name or identity. They were Alero’s boys, and she was both the mother and father, she alone had full responsibility for them, she alone decided what happened in their lives.

And one of such important decisions was choosing a wife.

Alero cleared expensive porcelain plates and briefly remembered the time she served porridge beans in rubber plates. Those were the times the boys ate lots and lots of beans. They were adolescents and always hungry; rice was no use, it was never satisfying. So, she cooked ten cups of beans twice a week, with palm oil and lots of cray fish. Plantain was a treat and was reserved for special occasions. Now she cleared rice and chicken off expensive plates. The memory was so potent, it drew tears from the corner of her eyes.

Jirin had brought another woman for dinner. And like the two ladies before her, Alero had frustrated and infuriated her till she got up and left Jirin behind. Alero never could understand what Jirin saw in the small woman with the astonishingly deep and almost baritone voice. But it wasn’t the voice that put her off. Even now as she sat with her cup of tea and thought about the lady, Alero couldn’t put her hands on what put her off.

The truth was she was being too difficult in the whole wife selection affair. But Alero didn’t see it as being difficult, it was being careful. After all women these days were as unstable as NEPA. Divorce was fast becoming fashionable, women breezed in and out of marriages. The rolling wave of female empowerment, feminism and activism was flushing women out of their homes and marriages. Alero was sure her sons deserved steady, stable wives who could put up with their insecurities and weaknesses and stick around, if not for anything at least for their children.

“If I had let Papa Jirin scare me away what would have happened to my boys?” She asked aloud.
The thought of the answer made her shiver.

Chikodi had hurled the book at him and called him a mama’s boy. The book was The Power by Naomi Alderman, the 2017 winner of the Bailey’s Women’s Prize for Fiction. Chikodi followed the Bailey’s Prize ardently, from the long list to the short list. She hoped Ayobami Adebayo would win.

Jirin went to great lengths to get the book. After the disastrous dinner with his mother, Chikodi refused to pick his calls or see him. After much calling and texting, she finally agreed. He felt he could appease her with the book, which he did briefly. When she opened the door to let him in she saw the book and yelped with excitement.
It was one of those things that attracted him. When she talked about books her face lit up in a beautiful, almost erotic way. And because he loved the way she fired up, he bought her books, orchestrated dates in book stores, and spent time googling the kind of books she liked. Also he loved her frame, her rich voice that boomed from such a petite body, and of course those surprisingly great legs.

When she let him in she paused at the door and watched him.
He handed her the book and smiled sheepishly.
She took the book and tapped her foot impatiently.
He cleared his throat.
“I am so sorry for what Mami did,” he started slowly. He needed to be careful.
“She is just being old fashioned, and you know she went through a lot raising us. So she’s just trying to be careful.”
“Are you defending her?” Chikodi cocked an eyebrow.
“Jirin do you remember what she called me?”
“I know, and I am sorry.”
“So what now?” She asked.
“We will have dinner again with her. This time you will be more careful. She said she didn’t like the red dress you wore. So maybe next time you will wear a white one. You can never go wrong with white….”
It was then she hurled the book at him.
“Bloody idiot! Spineless man! Mama’s boy! Get-out-of-my-house.”
He wanted to say he wasn’t a mama’s boy, just Alero’s boy, but she kept hurling book after book at him, there were so many close by. When she lifted a large encyclopaedia, he ran out for his life.

He was so lost in thought he almost hit an okada man.
“You no dey see?” The rider spat.
Jirin stopped driving and tried to breathe.
He was 29, rich and comfortable. Almost all his friends were married. He had brought three women in two years and Mami had turned all of them down.
“What else does she want?” He threw his arms up in the air.
He wanted Chikodi. But Mami didn’t want her.

As infantile as it sounded, he wanted his mother to want the woman he wanted to marry. His mother had gone through a lot for him, he didn’t want to trouble her in anyway, particularly in something as trivial as a wife. At first he thought it was a trivial matter, until his mother became so difficult, until he became smitten with Chikodi.

He wondered if there was a way to please both his mother and Chikodi. If there was he had to see it quickly.

When Alero opened the door for Jirin and his Oyinbo girlfriend, she almost fainted.
“Gosh, you are Jirin’s mother!” The Oyinbo screeched. Her birdlike voice hurt Alero’s ears.
But that wasn’t what scared the life out of her. The Oyinbo’s eyes were so green and sharp, they resembled the eyes of the Spanish woman that ran off with Papa Jirin.

Alero’s heart beat faster. At the dining she couldn’t talk. Instead she watched as the Oyinbo chirruped on and on, helping herself with the food, laughing shamelessly and touching her son’s shoulder. Alero slouched on the chair, and slumped on it till she was almost under the table. She felt like going to bed and covering herself with her blankets. The nightmare gave her shivers.

Three weeks after Papa Jirin left Alero still wondered why he chose an Oyinbo over her. She endured his beatings, fed him, and on hot feverish nights, loved him. Still he left her for a skinny woman with skin like freshly plucked fowl. Even when he returned looking like death itself, she nursed him and hoped he would live. Every morning she murmured in his ears,
“You see I stayed. I stayed for you, you see?”

But the gormless man died. After all these years, she was still bitter.
And the Oyinbo brought back the bitter taste of resentment in her mouth. Alero spat into a serviette and wandered to the kitchen.

“Mami what is it?”
She was relieved to see her tall impressive first son. She rushed into his arms and held his waist. She burst into hot tears.
“Ejo, Ejo, pity for me,” She begged.
Her exasperated son wrapped his arms round his tiny mother and patted her head.

“Yes Chikodi. She is such a nice intelligent woman.”
Alero burst into fresh tears and placed her hands on her chest.
“My son do you want to kill me? An Oyinbo wife?”

Jirin looked at his mother for a while and thought how small she was. She could be a twelve year old girl, he thought.
“Okay mother, if it is Chikodi you want, I will bring her back.” He hugged her and tried to sound uninterested.
Alero breathed out in relief. Jirin closed his eyes and smiled mischievously.

For the Jesuit Residence, LJC, Abuja.

Raped by a Bike Rider when She Was 18, Iyinoluwa Shares the Story of Her Journey to Healing in a New Book | Excerpt

Ifediba Zube is a medical student in the University of Port Harcourt. When she is not neck deep in clinical postings,she is running a 2.5k or in hiding with a good book. She has been published on Kalahari Review.