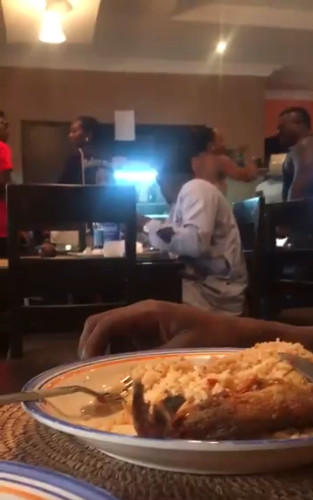 You’re hungry so you decide to go get food at a nearby eatery. It’s dark out, you’re dressed casually – you’re driving after all.

You arrive at the eatery and maybe you get your food first, maybe you don’t, but you need a guy to move his car.

You see him, dressed down, too, in a tank top, his muscles bulging. You walk up to him, and, well, he’s not very receptive.

A Twitter user shared a video of a lady being harassed by a guy at an eatery in Lagos.

She had needed him to move his car, but the simple request somehow led to him threatening to beat her up, calling her a prostitute, an ashawo.

After begging this man in front of Bukka Hut to park well outside, she simply tried to reason with him when he did not answer and the next thing he wants to beat her. What is wrong with people ehn??! pic.twitter.com/hkxvqwNt00

Is it Possible to be Happy every Single Day? Discover the Unbound Limit of Joy at the Joy Congress I Saturday, December 16th