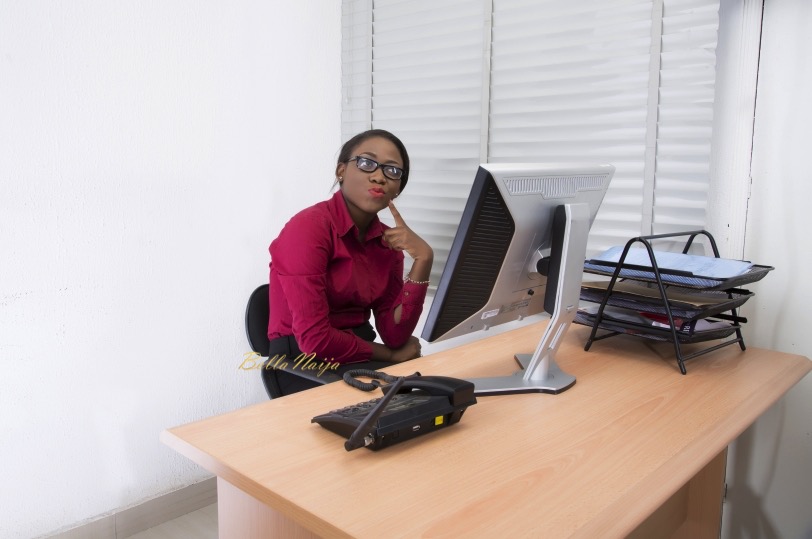 I had just come back from lunch break. Tap-tap-tap. I walked into the receptionist’s office to find out if the boss was in and could see me. She was on the phone but she nodded, waved me in. “Yes, Oga will see you,” she mouthed. I quietly opened the door and walked in. The room reeked of cigarette. I felt nauseous. I approached his desk. He smiled at me.

“Oh. Happy new year. Come and give me a hug,” he said, rising to his feet.

I walked up to him tentatively and tried to give him a brief side hug. He grabbed me with one hand so that I faced him, my body pressed against his. With the other hand, he held my jaw and tried to force his tongue into my mouth. I clenched my teeth to denied him access. The strong taste of cigarette coming from his mouth was nauseating. I pushed back as hard as I could. I stepped on his foot and struggled against him for a minute before he released me. As he dropped his hands to his sides, they touched my breasts – a conscious move. I stepped back as far as I could and explained why I was there.

I cried all the way home. Throughout the evening and into the next day, I had wet tissue after wet tissue crumpled in my palm. My eyes still brimmed with unshed tears the next day. One of the lawyers (I’ll call her Zee) drew me aside and asked, “Are you okay?” I looked at her for a minute wondering how to answer, and then I blurted out, “Did he harass you too?” She paused, broke into a short, violent laugh, before asking, “So he touched you too? What did he do?”

I narrated my ordeal to Zee who stormed out of the office and returned moments later with the second lawyer (let’s call her Dammy). Dammy’s face was contorted with rage. She didn’t mince words: “Chiugo, so he has started with you too abi? Do you see why I didn’t want you to work here? This was what I was trying to avoid, but I didn’t know how to tell you. If you had left, you wouldn’t have had to experience this.” I was stunned and shocked, but let me explain why.

About a month earlier, when I had just relocated to Lagos from Ibadan for my NYSC program, I was searching for a Primary Place of Assignment (PPA). I went to this firm because he was my dad’s lawyer and friend. I met Dammy, the most senior associate there asides the boss himself (we’ll call him Mr. B). Dammy took me into her confidence while processing my request letter. She told me to look for a new firm, that Mr. B didn’t pay his staff well and was not a very kind man. She told me I was young, that there were different opportunities out there, and I shouldn’t get stuck in one place in the name of youth service.

I wished when she told me he was not a kind man, she’d said instead that he sexually harassed his female staff; that instead of telling me that he didn’t pay well, she said that no one was free from his advances whether I was the daughter of a client and friend, or a mother of two. Then I would have listened. I would have run.

After lamenting, Dammy looked me full in the eye and said, “You do know that you will not tell your father about any of this?” I was puzzled. “Why not?” I asked myself. As though sensing my question, she continued, “You don’t want to be the cause of any trouble between your father and him. Just leave things the way they are, maintain the peace, and when you find somewhere better, just move.”

It took me back to the time I told Momma that the pastor to whom she sent me for counseling tried to grope me. I wish she hadn’t been so unsurprised. I wish that instead of taking the news the same way you would take a test result that read malaria positive, she would have broken into a series of ewoo and chim o, beating her breasts dramatically the way African women are wont to do in tragic situations. I wish she had led me by the hand back to the church and disgraced the pastor, or maybe severely warned him to never raise his hands to touch me again. Instead, she shook her head. “I feared this would happen. You know, they are human too. They all have their weaknesses. Let it go, it is one of those things. Don’t tell anybody and don’t disrespect him. Make sure you don’t allow him. Just tell him, ‘Pastor, it is wrong, it is against God’s word.’ Quote the Bible, but do it respectfully.”

Although the number of women in the workforce is significant and rises everyday, the power dynamic in the labor market does not reflect this. 80% of top management positions are occupied by men. Most CEOs and owners of corporations, both large and small, are men. Most departmental and unit heads are men. In general, men have more control over the labor market and factors of production than women in Nigeria (let’s leave the rest of the world out of this).

This is not a conversation to spark misandry, neither is this a piece on feminism or its ideals. This is a conversation about the realities women face in the workplace. Do men face sexual harassment at work? Maybe. I don’t know this because no male I know has ever talked about it. Do women face sexual harassment? Most certainly. I know this because I have been through this a lot of times, and a lot of my friends have narrated horrifying experiences even as far back as the university.

I remember having to listen to some of my friends lament every week during our final year about their frustration from certain project supervisors who were never in their actual offices at the university, and would require their students (mostly female) to come to their home offices. Making a formal complaint about this was never an option, because doing so meant a panel had to be set up to investigate the claims, and there was the 95% chance that not only would you not graduate with your peers, the panel most certainly would not indict one of their own.

Statistically, seven out of ten women will have been harassed at least once in their career. For women who are pretty and physically appealing, it occurs more frequently. I do know that some women are comfortable trading sex for favors in the workplace, but some aren’t. Some of us want to work hard and see the effort pay off. It is hard enough being an employee in Nigeria’s labor market today, where the general legal protection available to the average employee is accessible only on paper.

The injustice of the system is such that the employee is constantly aware that one misstep and she will be out of a paycheck, and the employee bears the burden of protecting herself. She has only two options, none of which includes seeking redress: quit your job or deal with your situation (this means endure your plight in silence and find smart ways to avoid your predator- in essence, learn to play the game of cat and mouse). In an oversaturated labor market where it is simply unreasonable to quit your job until you have an alternative or something better, most women have to pick the latter.

A surprising number of women do not discuss these issues even with their spouses or partners mostly because nothing will be done about it. Another underlying reason for the silence is the negative attention attached to victims of sexual assault and harassment cases, the silent and not so subtle accusation that you contributed to this in some way.

In reading this you might ask: what will talking about it do for me? How will it help? In our local parlance, “Who that one don epp?” The honest truth is that I don’t know. I feel as powerless as the next woman, but I do know that perpetrating the culture of silence has not helped me too, and I am willing to consider the alternative. I’m also willing to do my very best to change the narrative in the market place.