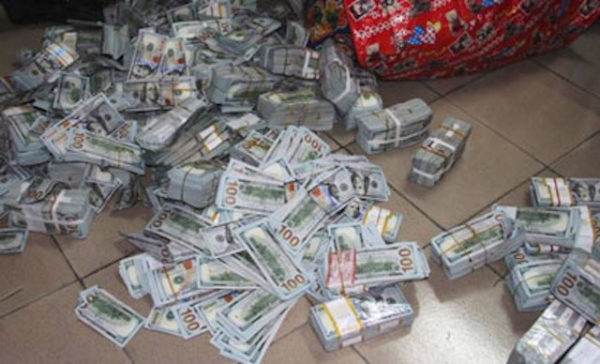 It has been revealed that the $43 million discovered in the Osborne, Ikoyi apartment, was withdrawn from Nigeria’s joint venture (JV) cash call account, The Cable reports.

The Economic and Financial Crimes Commission (EFCC) had in April found $43 million, £27,000 and N23 million in an apartment in Ikoyi.

In a report written by the auditor-general of the federation, seen by The Cable, it was revealed that the money was paid in cash to former National Intelligence Agency (NIA) director-general Ayodele Oke.

$289,202,382 had been released to the NIA without documentation, and besides, a request sent to President Muhammadu Buhari by Oke, the normal processes of authorisation were not followed.

During the examination of the JVCC JP Morgan Chase Account and JVCC CBN Naira Account, it was observed that payments with amounts totaling $292,094,405.82 and N2,474,295,000.00 were made from the Joint Venture Cash call accounts for purposes outside the objectives for which the funds were provided for and thereby constituted misapplication of Federation Funds.

However, audit noted that there was no evidence of the President’s approval to the request other than a minute to the then Minister of Petroleum Resources seeking assistance from the NNPC Security votes. It was not clear from records/documents examined the authority that NNPC/NAPIMS relied on to disburse this fund.

Audit noted that, of NNPC/NAPIMs did not make the payment to an identifiable NIA official account, but rather mandated the CBN to make the payment in Cash to the DG, in spite of government’s e-payment policy and the huge sum involved. This was highly irregular.

Audit further noted that this payment was not budgeted for meaning that it was extra-budgetary payment.

“Heads must roll if anything happens to Magu” – Muslim Rights Concern

#BNDoGood2017: Bringing Our Hearts to the Community This Christmas