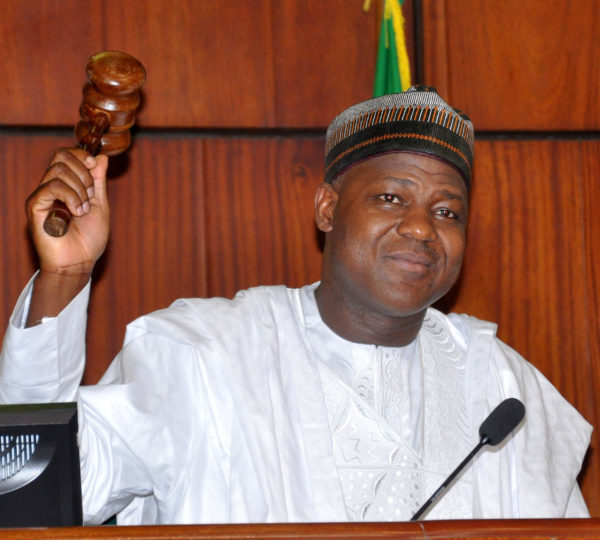 Yakubu Dogara, Speaker of the House of Representatives, in his biography written by Ovation publisher Dele Momodu, revealed a lot of politics that went on behind-the-scenes, The Cable reports.

The biography, titled “A Reed Made Flint,” and touches on how he came to be the speaker of the house of representatives, is set to be released on December 26, 2017.

Dogara reveals that the national leader of the All Progressives Congress (APC), Bola Tinubu called him into a meeting in his bedroom asking him to end his campaign and support Femi Gbajabiamila, who represents Surulere federal constituency, Lagos State. He said:

As a matter of fact, Asiwaju (Tinubu) is someone that we respect very much and no one can doubt the sterling role he played in the emergence of APC as a government. Asiwaju had through emissaries sought audience with me and in deference to him I went to see him along with a colleague, then Right Honourable Kawu Sumaila. When we got to the Asiwaju, seasoned politician that he was, he asked us to come to his bedroom. We held this meeting in his bedroom!

He appealed to us and said what he only wanted, as a leader, as a political father, was for us to please collapse our campaign into Femi’s and declare our support for him. Asiwaju maintained that, as a matter of fact, support for Femi was a support for him. He said if we supported Femi by extension we were actually supporting him and reciprocating the work he did to ensure APC won the Presidency.

He said while he couldn’t turn Tinubu down, he had to find a way around it. He told Tinubu:

This has always been my stand, Sir. It was my stand when (Aminu) Tambuwal was running for the Speakership and I ran for the position for Deputy Speaker. Even when my bosom friends had told me clearly what was happening and I knew, as an experienced politician, that we were running into head winds.

I had seen clearly the implication that Tambuwal was favoured more than 80% to clinch the Speakership. But I insisted that I was going to run because the party had said they had zoned this position to the North-East and I wanted to make a statement that there were people from the North-East willing to contend for this position in the interest of our own people.

Even if I was going to lose the election, let the people from my zone know that yes, they had someone who, when the position was zoned to them, was ready and willing to stand up and be counted. I ran for that position to the end against someone I considered to be a brother and a very good friend on that principle. In this situation, we are already boxed into that corner.

Since you have appealed to me as a father figure and I see you as a political father and as a mentor, a person we always ran to for advice really in the seventh assembly, and I still remember so many occasions I had to come here to seek assistance on behalf of others from you, I owe you the responsibility to listen to your appeal.

But I need to get back to the members who are supportive of my agenda and then to my constituents back home. We will discuss and at the end of the day I will get back to you with our decision.

Dogara went on to defeat Gbajabiamila, who later became the House leader.

Are you Female & Do you Love Fashion? Win Recharge Cards of any Network by completing a Survey form

To Positively impact the Society, ACT Foundation announces the Commencement of its 2018 Grant Cycle