Are we still Arguing about what makes Child Marriage Wrong?

This one is something.

Twitter users have for a while been debating whether it is wrong or right to marry off a child.

It’s a debate etched along religious lines, and arguments for and against are bound to be found offensive by certain parties.

Child marriage is a formal union entered into before reaching a legal “marriageable age,” often given as 18.

While Nigeria’s Child Rights Act of 2003 puts the legal age of marriage at 18, only 23 of Nigeria’s 36 states have adopted it, and so children as little as 12 can get married in some states.

In the case of religion, however, it is a bit trickier.

For pentecostal christians, the age of marriage is a rarely debated one, and the law of the land is often followed.

The Catholic Church’s 1983 Code of Canon Law, on the other hand, puts the age of marriage at 16 for males and 14 for female.

In Islam, marriages of girls at the young age of 10 have been known to be permitted, and it is often argued that a female becomes a woman, therefore of marriageable age, as soon as she attains puberty.

As is the usual on Nigerian Twitter, the fundament of the argument rests on religion, and so people for child marriage are saying their religion permits it, and people against are condemning both the people for and the religion.

Child marriage though, by any standard, is deplorable.

Isn’t it awkward that one who is not trusted to cast a vote or handle alcohol, not trusted to handle an automobile, is expected to enter into a lifelong contract?

A quick exercise: Imagine you at 14, the thoughts in your head, the way you reasoned, saw the world. Then imagine you in a marriage at that age.

Besides, it would be insincere to discuss child marriage and not mention women’s rights.

While men are indeed married off before they attain the age of 18 (as of September 2014, 156 million living men were married as underage boys), it is women who are mostly the victim of the act.

In Niger, the country in which child marriage is the most prevalent, about 3 in 4 girls (75%) marry before their 18th birthday.

In developing countries, one of the most common causes of death for girls aged 15 to 19 was pregnancy and child birth.

And there are other health detriments, like obstetric fistulae, premature births, stillbirth, and sexually transmitted diseases (including cervical cancer).

Still, the argument carries on. See what people on Twitter have to say: 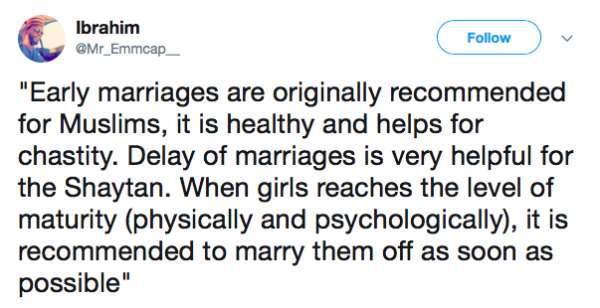 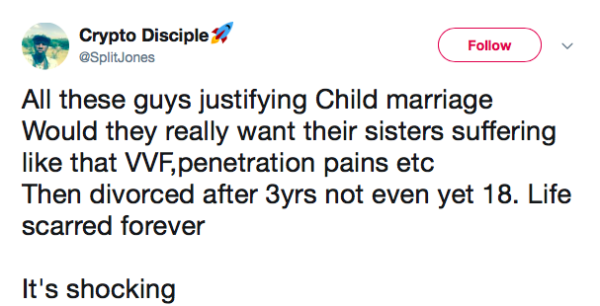 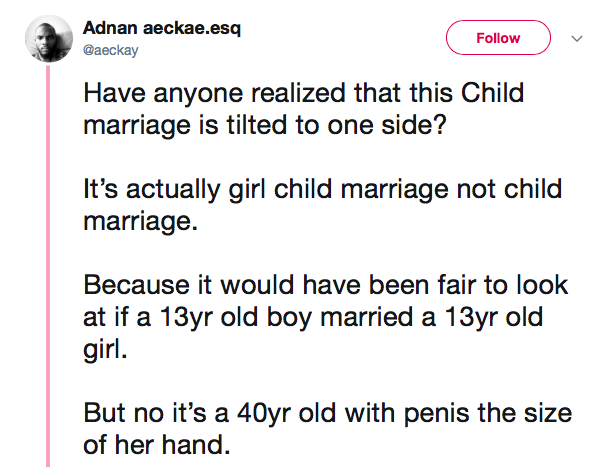 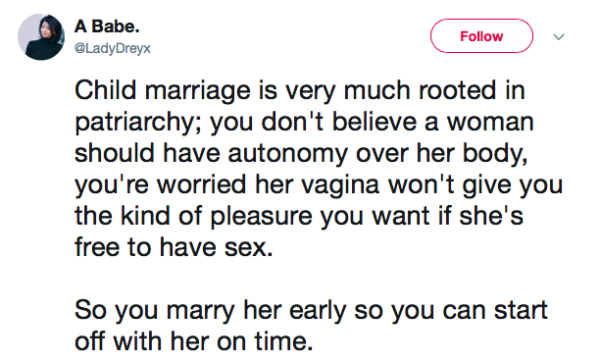 Wanna Dine Out? 5 Factors to Consider When Choosing the Right Restaurant for You