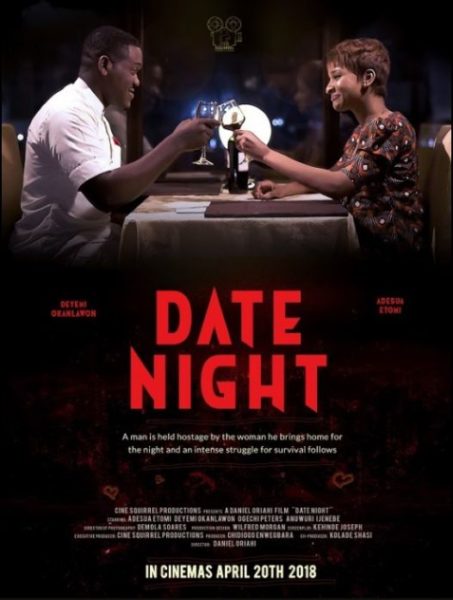 The boy meets girl-who-turns-out-to-be-a-psycho storyline has had various appearances on the big screen. Perhaps the iconic appearance is Fatal Attraction, where Michael’s Douglas’s boy happens to be married and Glenn Close’s girl takes his betrayal a little too much to heart.

Last year Rita Dominic featured in one such movie, the awful The Guest. This year, Daniel Oriahi has made a movie along that line. It isn’t quite as terrible as The Guest. But that is not exactly endorsement.

When we meet the couple, who for the next hour will more or less keep us company onscreen, they are having a dinner at a highbrow restaurant. Accordingly, Lota and Femi talk highbrow stuff, Greek mythology forming the foundation of their conversation. Femi (played by Deyemi Okanlawon looking off-putting in close-ups) appears to believe the average Nigerian girl isn’t interested in such discussions, and is so surprised by Lota that he is almost certainly aroused.

As an opener, the scene is both good and bad. Many of today’s Nollywood films would use a Nigerian pop song as soundtrack here, but Oriahi uses silence in patches. The effect is we know that what is important is the dialogue between these two, the way lovers of a certain temperament use talk as foreplay. Unfortunately, this insight into the nature of heterosexual passion isn’t sustained.

On the bad side, the scene is too much on the nose. Screenwriter Kehinde Joseph Anthony perhaps read too many books on the importance of foreshadowing, so when Lota says she admires the goddess Nemesis, it is clear she is concealing something up her elbow-length sleeves. And if that fails to clue in the viewer, Adesua Etomi, as Lota, decides to switch face from joy to Nollywood movie-malevolence. You might know the look: it consists of eyes widening and cheeks folding as the score becomes ominous.

It is an unexpected irony that this opening scene does foreshadow two things wrong with this film: The actors are not sure if they are in a romantic comedy or in a thriller; and the film’s lighting and cinematography fails to set an adequately eerie atmosphere for what follows. You get the idea that while obviously indebted to Hollywood, at this point Date Night can’t quite choose whether to be guided by the spirit of Alfred Hitchcock or by the hands of Judd Apatow.

Lota and Femi skip dinner and head home to Femi’s house. Femi, of course, is thinking of sex, and gives some speech about liking that a woman who knows what she wants, as she is said to have wooed him a day before we meet them. This idea of female empowerment, too, becomes a thing to be used by the film; it kicks into the gear with Lota’s first strike.
With years of female subjugation as part of the history of Nollywood, it feels about right that this one time a woman gets to strike righteously, but in trying to transfer this specific gender politics to a physical exchange between Lota and Femi, the film stretches its own believability. On one occasion, the rather reedy Etomi envelopes Okanlawon and it’s a bit of a mystery that he doesn’t fling her to the afterlife with one reasonably bulky arm. To be fair, there is a bit of guile involved in the exchanges, but there are also too many physical confrontations between the film’s centre characters.

But the actors don’t recognise the incredulity of their situation. In fact to their detriment, Etomi and Okanlawon come to think they are in a movie better than the one we are watching. Okanlawon overacts; in a key scene, Etomi overlaughs. For his part, Oriahi overindulges his actors.

And yet, there are clever bits. In one scene a character says, “the status quo is not moving the story any further”; this clearly meant to serve as a wink to the alert viewer during a narrative impasse.

There is also some psychological basis for behaviour towards the end. It involves a parent—you know like Norman Bates in Hitchcock’s Psycho. This is tied in with a literary plot point involving a number of novels including the Philip Roth novel Portnoy’s Complaint. This bit will gladden the heart of book lovers, but the way Chidiogo Enwegbara’s story goes about introducing these books leaves a lot to be desired. It doesn’t help that Date Night finally kills its own ambitions with one of the most ridiculous resolutions in a New Nollywood film.

Oriahi is a student of cinema, visible in how much his films refer to his global predecessors. There is Hitchcock here, as there was Martin Scorsese in his previous film Taxi Driver (Oko Ashawo). But he might need to also become master of his own filmmaking. To do that, he would have to reject scripts like Date Night—or else rewrite the whole thing himself.

Throwback Thursday: Can You Guess Which #BBNaija Housemate this Cutie grew up to Be?