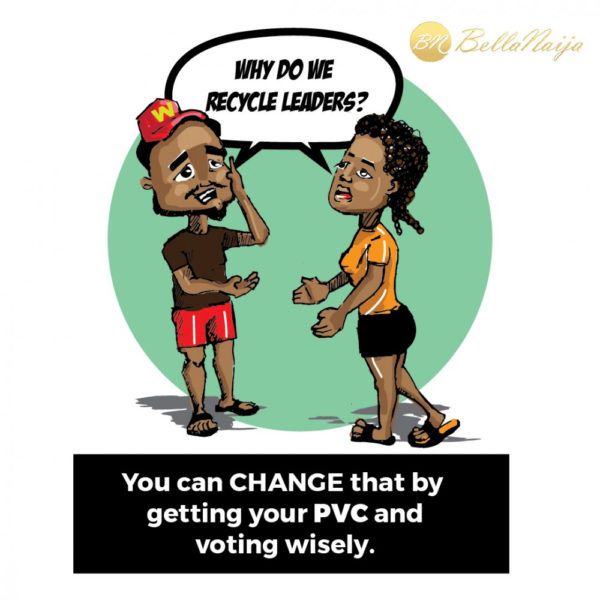 There are just 27o days away to the 2019 general elections. Have you registered to vote? Have you gotten your PVC?

As long as you’re over the age of 18, you’re legally allowed to vote.

Your vote is your voice. It is the only way to ensure whoever you want representing you does represent you. From your councillors to the president.

It is normal for us to focus only on the big one: Governorship and Presidential elections. But the others are also very important.

It is the legislative who is saddled with making the laws. Your senators and your house of representatives members. They are the ones who represent your community. It is important you choose them wisely.

And how else to choose but to vote?

Whatever state you’re in, you can find a registration centre close to you HERE. There are INEC offices in all local government areas in the country and INEC says the exercise is all year round. They are open Mondays to Fridays (excluding public holidays) from 9AM to 3PM.

You go to the registration centre with a document that can prove your identity and your age. Your National Identity Card is fine, permanent or temporary. There’s also your government issued Birth Certificate, or your Driver’s License, even your National Passport.

Remember to register at the centre nearest to your home, so it’s easy for you to vote during Election Day.

You can also transfer from one polling unit to another during this registration exercise.

Temporary Voters Card (TVCs) will be issued to registrants at the point of registration, while the PVCs of those registered in Quarter 1 (Q1) should be ready for collection in Quarter 3 (Q3), and Quarter 2 (Q2) will be ready in Quarter 4 (Q4) etc.

The last week of each quarter will be for display, hearing the Claims and Objections and housekeeping (Data backup, Consolidation, Reporting etc).

Register to get your Permanent Voters Card (PVC) today. Please.

Share this message. Encourage others to get their PVCs if they haven’t already. Pair up with someone to get yours together. Just get it, and make other people get theirs too.