BN Presents Beyond the Three: Discover the Bini People As Told by Idia 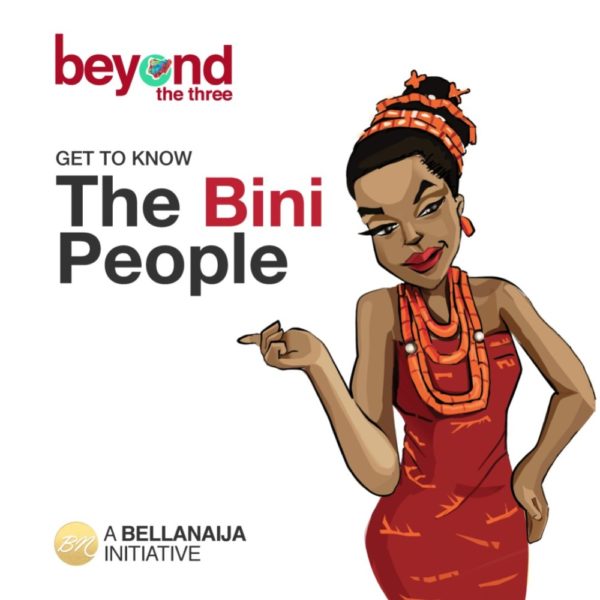 In the first edition of this series, we were introduced to the Idoma people; this was followed by the Esan people.

Today, Idia shares fun facts about the bini people  of Edo state. The Ancient City of Benin is the home of Binis and it is one of the oldest empires in the world, known for its bronze making.  Idia says she wants people to know about her culture so that people can understand the Bini pride. She says: “proud, not because we want to be deliberately arrogant or cocky, but because our culture is so rich that it is impossible to not celebrate it as much as we can.

****
What is your name and what does it mean?
Idia means warrior queen. Queen Idia was the strong and courageous Queen Mother of Oba Esigie of Benin Kingdom.

What is the name of your tribe and what language do you speak?
I’m from the bini tribe, found mostly in Edo State. My language is called bini; I can speak it quite fluently.

Have you ever visited your village?
I was born and bred in Benin City and I have never visited my village.

Tell us about some of the unique rites and cultures about your ethnic group
The bini people have some interesting and unique rites which I am glad to share details;

Naming styles
Seven days after the birth of a child, the naming ceremony is done in presence of the child’s parents, grandparents and other family members. The parents and grandparents each give the child their respective chosen names. Among the items used for the ceremony are, coconut and kola which both signify joy, sweetness and celebration.

Marriage rites
According to the customs and tradition of the bini people, the bride price which used to be 12 pounds in the past, (now 24 pounds) is paid to the bride’s father, along with the dowry items. The bride’s mum and the youths of the family are also taken care of by the groom and his family. Finally, the bride is escorted to the husband’s house after the ceremonies following the traditional and customary rites.
However, the wedding attire for the royals is different from that of the ordinary citizen. This can be seen in the type of red wrapper which the bride ties across the chest and the beading style done on the head of the bride and the number of horns made on the beaded hair style.

Dressing and fashion
The traditional outfit of the binis is the white skirt and blouse regalia with designs of the ceremonial swords adorned with coral beads for the men and red wrapper tied across the chest with beads adorning both the hair, neck, wrists and ankles for the women.

Food
The traditional food of the binis is pounded yam with egusi soup.

Funeral rites
According to benin customs and tradition, all sons and daughters are brought back home for burial, regardless of marriage or other affiliations.

Please share a proverb that is indigenous to your people
A popular proverb that is native to my people is one of the seniority of the Edo Man over all other tribes in Edo State. The saying therefore goes…. Edo odion, edo gha se oghe omwan, edo odion. This means, edo is senior, when edo goes to another’s land, edo remains senior. This resulted after a dispute between the binis and the esan people of Edo state about who is senior.

What do you love about your culture?
The thing I love the most about my tribe is the traditional outfit and dance.

What are the things you don’t like about your culture?
I cannot think of anything I dislike about my people and that is not to say there isn’t any.

Tell us about some of your cultural festivals
One of our cultural festivals is the “igue festival” which is literally an annual thanksgiving festival. It is celebrated on market days and lasts for about 14 days for the major activities. The symbol of this celebration is a leaf called ebe ewere which signifies happiness and joy. The igue festival is celebrated in three categories, namely:

i. Igue ero Oba – which is celebrated by the Oba/King in honoring his ancestors.

ii. Igue Oba – which is celebrated by the Oba

iii. Igue ivbie oba – celebrated by the children of the Oba

iv. The general celebration for the citizens.

What do you wish more people knew about your people?
Among the numerous things I wish people knew about the bini people is the construction of the wall of benin popularly known as “the great wall of benin” or “the benin moat’. It is described by the Guiness Book of World Records (1974) as the world’s second largest man-made structure after China’s wall; in terms of length, it is the most extensive earthwork in the world (www.kingdomofbenin.com). This wall was built in the era of wars/invasion in the benin kingdom.

Thank you for sharing this with us, Idia. We truly appreciate it. BellaNaijarians who are joining us for the first time, you can find out more about Beyond the Three series HERE. Click HERE to read more entries in the series.

Debbie Larry-Izamoje: 3 Fears to Overcome If You Want To Succeed as an Entrepreneur