Beyond The Three: Discover the Esan People as Told by Eseosa 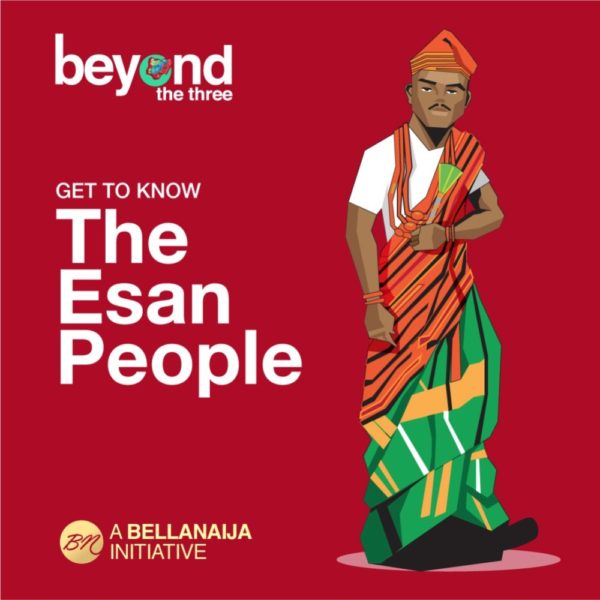 In the first edition of this series, we were introduced to the Idoma people. {Click here if you missed it.} Today, we’re turning the spotlight on the Esan people of Edo state, thanks to Eseosa. Eseosa describes her people as a general force to be reckoned with, having talents in bronze making.
Let’s find out more about the Esan people, shall we?

**
What does your name mean?
My name is Eseosa Ebhohimen which means Eseosa-God’s gift; Ebhohimen- I’m supported by people.

What is your language called and do you know how to speak it?
My language is the Ishan language. I’m not very fluent, though

Tell us about some of the unique rites and cultures about your ethnic group
Naming ceremonies
This is done on the 8th day of birth where the religious elders are called and a feast is made. In the village, when a woman gives birth, a relative applies a white native chalk or ‘orue’ on their forehead as either a line (one child), two lines (two children) etc. The woman wears a bright cloth to signify happiness that a child is born and goes to the market on market day which is every 5th day to announce the arrival of a child.

Weddings
During engagement/introduction, the bride is adorned with coral beads and a wrapper tied around her with the top left bare while the groom brings items on a list that had been provided by the bride’s family before the engagement day wearing white singlet and ‘igbu’.
The bride is told to sit on the groom’s lap 7 times after which she is seen to be married to the groom. The bride price is usually a meagre amount of money such as 5 naira which is paid before the bride sits on grooms lap 7 times.

Ruling class/Governance
This is the Oba of Benin, who is supreme authority in Benin kingdom, with several chiefs that occupy hereditary posts.

Death and Internment
When a woman dies, her body is taken back to her father’s house and buried there. When a man dies, he is buried in his compound or right inside his home.

General dressing
apart from the wedding day attire mentioned above, the woman wears two wrappers and a blouse while man wears wrapper, on the lower part of his body and a shirt on top.

Food
This is ogbono and pounded yam

What’s that thing that you love the most about your tribe?
We are a very hard working and industrious people that are very uncomfortable with laziness. We can toil the land for food, if that is the only option we are left with. We are also very neat people that love to keep everywhere neat and tidy. It is safe to say that an average Edo person hates dirtiness.

Share a proverb/folklore that is native to your people
A person is not told not to have slanty or ‘shovel’ teeth, but the person should still be able to use his/her lips to cover it up if need be. This means that a person should be able to bear consequences of one’s actions.

What’s that thing you don’t really like about your culture?
Lack of cooperation amongst the people. Also, the fact that some parts value male child over female child irrespective of the child’s talents.

What do you wish more people knew about your people?
that we are an industrious people that prefer to do any thing but beg to survive and really love education with a passion.

Eseosa, thanks for sharing parts of your culture with BellaNaija.

Find out more about the series HERE. Click HERE to read more entries in the series.

Yewande Jinadu: Culture Fit is Important in the Recruitment Process