Beyond the Three: Roli Teaches Us About the Itsekiri People of Ode-Itsekiri 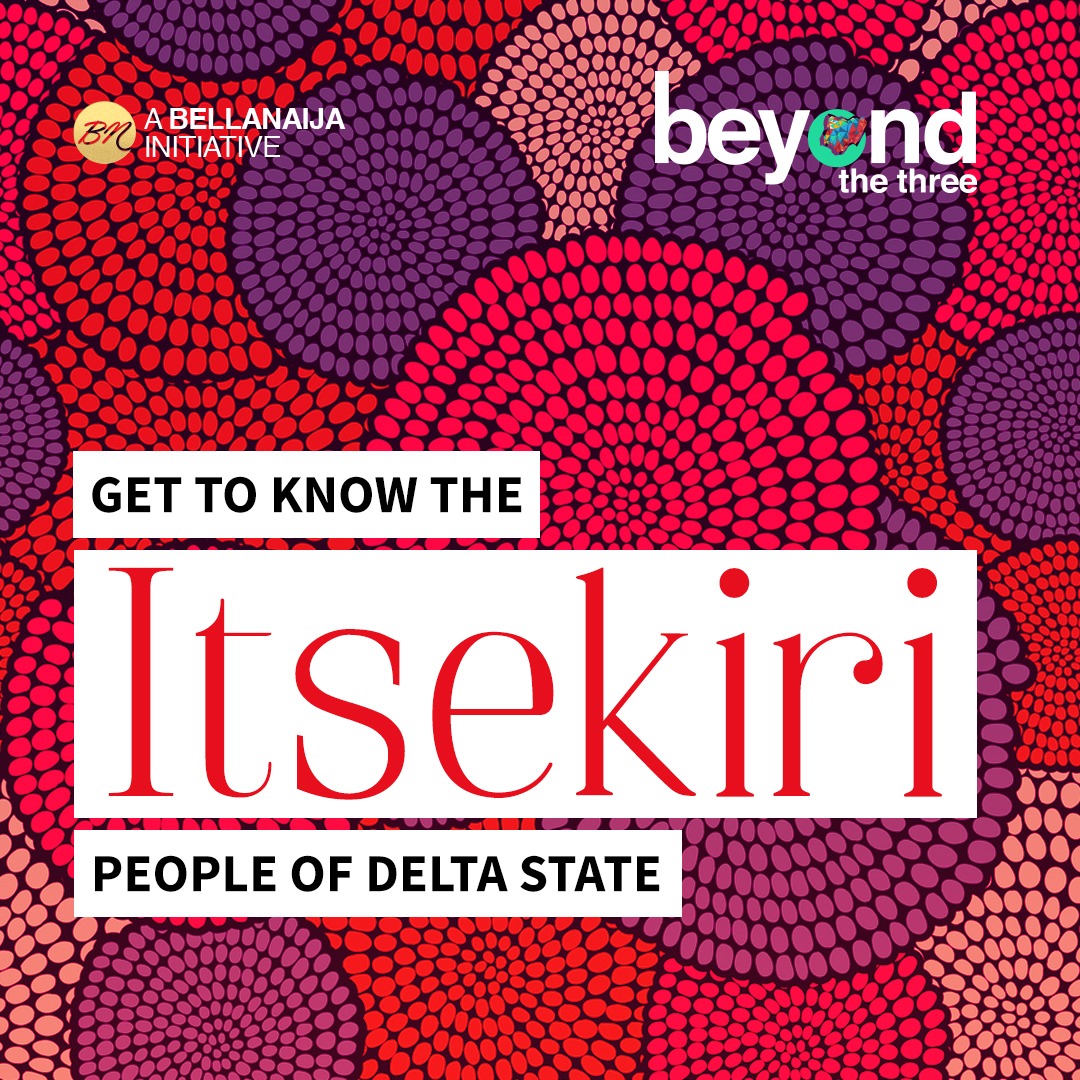 Beyond The Three is a  series on BellaNaija where we celebrate and spotlight every tribe and ethnic group that is NOT Yoruba, Hausa or Igbo. We invite ALL BellaNaijarians to be a part of this initiative.

In the first edition of this series, we were introduced to the Idoma people; this was followed by the Esan people.  Joan introduced us to the Oegorok people and we learned about the Mhiships from Mwanret. Ma’ade told us about the Bassa people.  We had the pleasure of reading about the Uwano people of the Weppa Wanno kingdom. We were taken to Langtang to meet the Taroks, thanks to Tanchit. Moses provided us with insight into the Isoko people. Nhaoma shared the Ikwerres with us.  We’ve also met the Bwatiye people, thanks to Kada, and the Yandangs, courtesy of Lynda. Following that, Kandyi introduced us to the Fantswam people.

On this episode, Roli shares with us the norms and culture of the Itsekiri people. Although they are everywhere in Lagos, Edo and Delta states, she shares that the Itsekiri are specifically from Warri, specifically Big Warri, an island also known as Ode-Itsekiri, where all their big cultural events take place. Roli is a little unsettled by some stereotypes people have about Itsekiri people, and she wants everyone to know they are false.

What’s your name and what does it mean?

Interesting. Where can Itsekiri people be found in the country?

The Itsekiri people are predominantly found in Delta State. They say there are a lot Itsekiris in Edo and Lagos, but they moved there. That’s not their hometown. Their hometown is Warri.

If you know the history of Nigeria, you’ll know there was a fight between the Urhobos and Itsekiris over Warri. They said that the fact that the Itsekiris were living in Warri was very political. This happened in the days of Awolowo. The Itsekiris and Urhobos were living in peace and harmony, but they made the king, an Itsekiri man, the Olu of Warri; I think that’s how the problem came.

Anyway, the Itsekiris have a place where their Olu stays, and it is called Ode-Itsekiri. That is supposed to be our ancestral land. The first time I visited was two or three years ago. The former Olu died. It was fourteen days of celebration, and the coronation of a new one.

Do you speak Itsekiri?

I can get by on the language. I don’t speak fluently, but I can get by. I more or less lived there. I was born in Onitsha. My parents lived in Sapele, which is like twenty-five minutes from Warri, our hometown.

That’s really cool. Okay, can you tell us about some of the unique rites and cultures about Itsekiri people?

Naming
Like most Nigerian tribes, names are given after the events, or in accordance to the events of the time and period the person was born. Itsekiri names are very long. In fact, people say Itsekiri names are sentences or phrases. Let’s go back to my name, Urowoli, which means softness has come into the house. Because they believe the male child is not soft.

While I was known in school and in Warri as Roli, in Sapele where I grew up, I was known as Wedding. So people are named after events. It was like a nickname. My father’s best friend was getting married on the day I was born, and my father was the best man. My mother was supposed to be at the wedding.

I have a friend, too, whose name is Pat, but she was called Ipay. When she was born, she came out looking very light-skinned. Like half-white. And her parents were black. So people began going to the hospital to see her, paying the parents just to look at her. Hence the name Ipay, meaning I pay money.

Marriage
For weddings, the families have to be introduced first. But we don’t do what they call introduction. We do what they call tenotsi. The meaning is to spill drink on the floor. The tenotsi is the marriage, the traditional wedding. There’s kolanut, but we’re not particular about bride price. What we do is we pay six shillings and a carton of gin. We have this headgear we tie, but it’s different from the Yoruba gele. And you can decide if you want to wear corals or george. The jewellery is usually very heavy. If it’s gold it’ll be heavy gold, if it’s silver it’ll be heavy silver, and if it’s coral, it’ll be heavy coral. The men tie wrapper, and they wear the shirt called chemije. It’s a long sleeved shirt with cuffs.

Inheritance
There is no discrimination when it comes to inheritance. Male and female both inherit. When my mother’s step brother passed, he died intestate, and also without a family, so his properties were shared on the basis of need at the time. His brothers, sisters, and a child who was yet to be born all got things based on need. The child got the largest property, considering he’d need it to make his way through life.

Funeral
The funeral rites include invoking the ancestors. There’s also the cutting the fingernails of the deceased, called Akika. Then you take it to the ancestral land, the Ode-Itsekiri. It’s also called bife, and it’s done to find out if the person is clean. If they don’t have witchcraft. If the person isn’t clean, they won’t bury the person in the ancestral home.

Food
Our traditional Itsekiri meals are Banga soup. We have for breakfast lunch and snacks. For breakfast we have yam and peppersoup. That’s the normal pepper soup, igbagba. There’s epuru, that’s the type you put yam and plantain inside. Then there’s the pepper soup you don’t cook at all. It’s just spices and water. It’s called ogolo ale. Ground pepper. Pepper of the ground. What you do is you take your water and you add the pepper soup spices, then you roast your fish, add it in the pepper soup. That process keeps it hot.

For lunch, it could be starch and Banga. There’s another type of starch, it’s starch with ripe plantain. They mix the ripe plantain with the starch. They beat both together until it’s really smooth. Can you imagine the calories? It’s like a dagger in your heart. And people eat that with Banga soup. Or with pepper soup. It’s called egun obobo. Obobo is ripe plantain.

For dinner, we tend to eat light. We eat popo garri and prawns. Or we eat the same starch. But it’s usually something light.

This is all so cool. Can you tell us about the cultural festivals you guys have?

We have cultural festivals, and they’re called okere juju. They’re very popular. People come from all over to participate. Children who are long gone, who want to reclaim their tradition come around. That takes place in Warri. But all the other Itsekiri villages have their own different types. They have their own festivals. And for all big festivals, the really deep traditional festivals, you have to go to Big Warri. Big Warri is different from the normal Warri. It’s an island, and you can only get to it through water. It’s impossible to get there by road. So things like coronations, you have to go to Big Warri for them. It’s the ancestral home, the Ode-Itsekiri.

What’s one thing you wish people would know about the Itsekiri people?

The one thing I wish people knew about Itsekiri people is that the women aren’t loose. Because there’s this negative stereotype that Itsekiri women aren’t faithful. That you can’t have them as wives because they don’t stay. That fidelity is not their thing and they go from one man to another. And that’s a wrong stereotype.

Another wrong stereotype is that we’re not an industrious people. They say is that we’re too consumed by fashion, too taken by style. So there is the belief that we don’t work hard. That we’re not given to industry. That yanga is all we know. That we just look pretty and wait for the men to come to us.

And what’s the one thing you don’t like about your tribe?

The only thing I regret about the Itsekiri people is the numbers. The population. A lot of people tend to marry out, so you don’t retain the culture as much. For instance, the Olu of Warri who just passed, his wife is Yoruba. That dilution means that his children could not be king. His son could not be Olu. He did try to change the rules, but people were not having it. Thing is, he did it too late. And, first of all, none of his kids could speak Itsekiri. He raised them in Lagos. So, yeah, I don’t like that about our people.

Oh that’s a little sad. That’s sad. Anyway, thank you so much for this. Do you have any parting words?

That the Itsekiris are the best dressed in Nigeria!

Thank you so much, Roli. We appreciate you taking time to talk to us about the Itsekiri people. BellaNaijarians, find out more about the series HERE. Click HERE to read more entries in the series.

With Breaking Hearts, Nigerians on the Internet Mourn the Passing of Adewura Belo ?

Olaide Ajanaku: Once Upon a Guy at the Bar