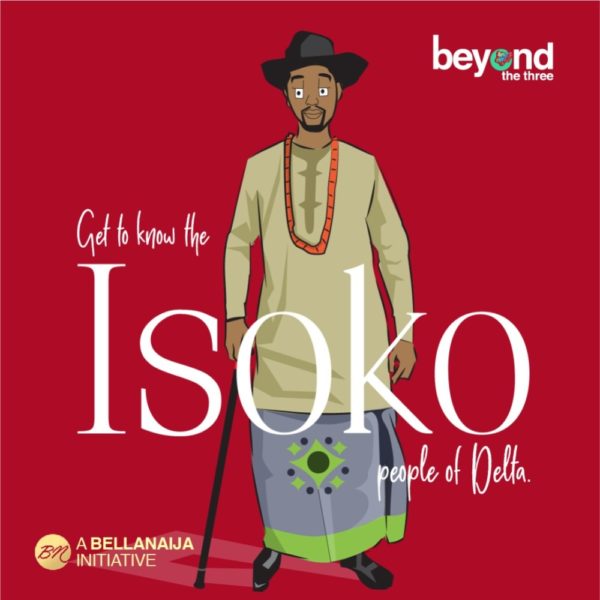 In the first edition of this series, we were introduced to the Idoma people; this was followed by the Esan people.  Joan introduced us to the Oegorok people and we learned about the Mhiships from Mwanret. Ma’ade told us about the Bassa people.  We had the pleasure of reading about the Uwano people of the Weppa Wanno kingdom. Last week we were taken to Langtang to meet the Taroks, thanks to Tanchit. Today, BN Contributor Moses Obroku is taking us to the land of the Isoko people of Delta State. In his message to us, Moses emphasized that he wanted to share two notable thing about the Isokos: the beauty of communual living, and the process of serving drinks.  Why? “To shine the light on the deep cultural heritage of my people, hoping that the rest of Nigeria and indeed the world can learn of our ways of looking out for one another through our aspects of communal living as well as the uniqueness with which we entertain guests.”

****
Tell us your name and the meaning
My name is Moses Omamoke Obroku. My native name Omamoke, (my preferred short form of it being Oma) means good gift.

What is your language called and do you know how to speak it?
My language is Isoko, just like the people. Although I understand the language perfectly, to be honest, I speak it haltingly.

What states of Nigeria are your people mostly found in?
Aside from the homeland in Delta, there is a strong Isoko presence in Lagos State.

Tell us about some of the unique rites and cultures about the Isoko people
My people have developed and sustained a form of communal living in certain aspects of our socio-cultural lives, dating back to several generations. I shall highlight a few below:

Funerals
During burial ceremonies, this communal living practice is demonstrated in different ways-

Firstly, the extended family members of the deceased hold a preliminary meeting with the children of the deceased, to inquire if they want a shared financial responsibility of the burial with them or if they would rather handle the cost alone. If the children answer affirmative to the former, everyone in that lineage is tasked an amount called ‘azohor’ to give the deceased a decent burial. The males are usually required to contribute more than the females, while the very elderly are exempted due to age.

In the final days leading to the burial proper, all the women residing in my village are expected to contribute some firewood and garri to assist with the cooking of the food with which guests will be entertained. If a cow was slaughtered by the children of the deceased, the head of the cow as of right goes to the extended family members, who cook it up often times in plantain and yam pepper soup (called ‘ukodo’) in a large pot; and shared to every household of that extended family residing in the village. These aspects of communal living are practiced to foster a sense of togetherness during various situations affecting members of a community.

Marriage rites
A typical Isoko marriage ceremony requirement would among other things include some bags of salt and certain sum of money for the women in the bride’s village. These are subsequently shared to all the women residing in that village, regardless of how little everyone got. 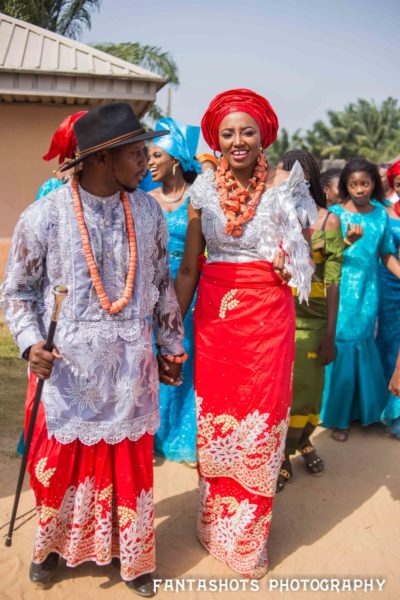 The process of serving drinks to guests
The Isoko people have a unique way of presenting drinks and other goodies to guests during visits. In the earlier times, it was the standard local gin called ogogoro in a bottle and the typical serving glass called ‘shot’, some kolanut, and maybe alligator pepper on a plate. Today, it is whatever drinks are available, and cash is sometimes a replacement for kolanut where it is not available. The host usually presents these and some money by the side of the kolanut, to ‘support’ it from rolling off the plate. He also puts another token of cash on the plate called ‘workmanship’, which goes to whoever breaks the kolanut and serves the drinks eventually –for his labour.

Upon presenting these to the guests, the host makes some remarks called ‘yegwa’, welcoming the guest(s) and mentioning all the items he has presented. He ends the remark by telling them to accept the items, while asking if the call was a mere social one or if there was an issue that needs to be addressed. If it’s the former, the guest(s) say so and one of them breaks the kolanut and pours the first drink to the host as honour (although I think it’s to surreptitiously confirm the drink free of harm). If the visit is for a different purpose like marriage introduction, the guests say so; accept the drinks and other items presented to them and clear them off the table. They then present similar items they have come with (it is unacceptable to visit a prospective bride’s family empty handed), and give similar ‘yegwa’ during which the purpose of the visit is stated by the spokesperson of the group. Everyone in the groom’s entourage is expected to ‘support’ the kolanut they have presented with a token to impress the bride’s family.

If the host has no objection to the purpose of the visit at this point, the kolanut is broken (and always first given to the eldest person at the gathering to pray for all) and passed round while the drinks get shared too.

Ruling class/governance
Most Isoko communities have either an Ovie or Odiorlogbo (depending on what title they wish to adopt) at the top of the leadership hierarchy. An ovie appoints his chiefs in council at his discretion, while the other members in the cabinet are the clan heads called ‘odior’. A group of the nine most elderly men in every clan referred to as ‘edior-in-council’ report to the Odior of the clan. In Ivori-Irri where I come from, at 82 years old, my father is currently one of the nine members of the ‘edior-in-council.

Outfits
The standard Isoko dressing for women comprise two wrappers called ‘ehor’ (ohor –singular) , a blouse ‘ewhu’, a headtie ‘udofor’, the coral beads ‘ivie’ and of course appropriate slip-on shoes with a purse to match. The men tie one large wrapper called ‘ogbru’, a top also called ewhu, the coral beads and a bowler hat called ‘etu’. His dressing is complete with the shoes and a walking stick. 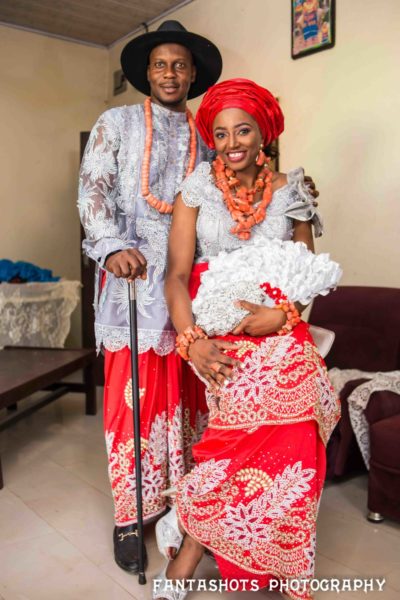 Food
Starch (ozi) and banga soup (izwo amiedi) full of dried fish and goat meat- that is the ultimate meal anyone can have on earth. 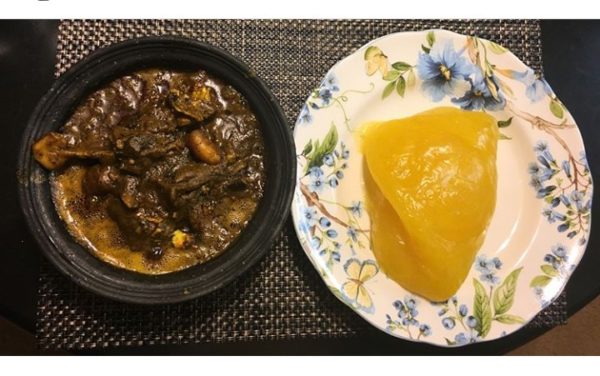 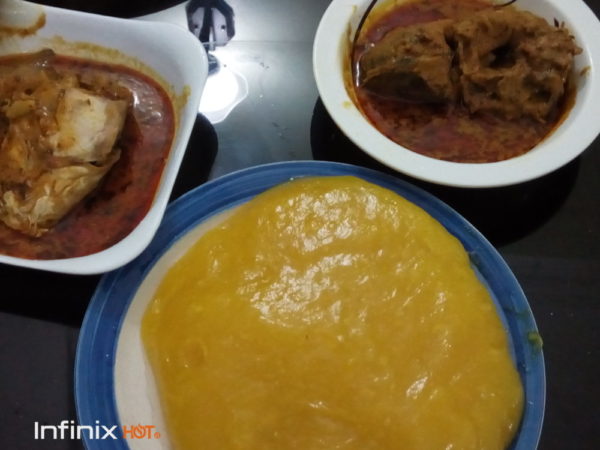 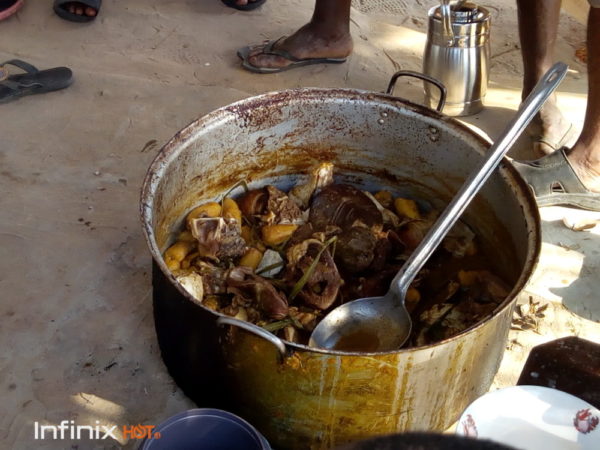 What’s that thing that you love the most about your tribe?
The style of singing-Isoko people can make melodious music. You can hear flawless soprano and tenor from the ladies, as well the distinct sound of the gong ‘egogo’ accompanied by that peculiar sound from clapping of hands that only Isoko people know how to.

What’s that thing you don’t really like about your culture?
The gradual intrusion of English language, as the language of communication among Isoko people, especially outside the homeland. I wish we all spoke Isoko fluently always.

Tell us about some Isoko cultural festivals/practices
Although I have never witnessed them, I have heard about the ‘erin okpe’ festival, Oliho festival as well as the ‘Omode’ festival.

This narrative will not be complete without mentioning the relationship between the Isoko person and the cutlass. My people are mainly agrarian by occupation in the communities. As such, every home has cutlasses for everyone- even young boys and girls. Sometimes, if it becomes necessary, the cutlass may be a tool for persuasion when normal dialogue fails. I am sure everyone has heard of ‘Isoko tolopia’- ‘Isoko carry cutlass’

What do you wish more people knew about your people?
We are mostly unassuming by nature. Isoko people are some of the most brilliant minds in every endeavor, but are often hidden in plain sight. Except the conversation naturally moves towards origins, you may be with an Isoko person for several years and not realize it.

Share a proverb/folklore that is native to your people
My mama always said to us ‘Orie yoh, orie tor’ essentially meaning ‘your conduct will determine your future’

Thank you so much for talking to us, Moses. We totally enjoyed this. Also, thank you for sending photos. They’re beautiful. BellaNaijarians, find out more about the series HERE. Click HERE to read more entries in the series.