BN Presents Beyond The Three: Tanchit Takes Us on a Discovery Journey of the Tarok People from Langtang, 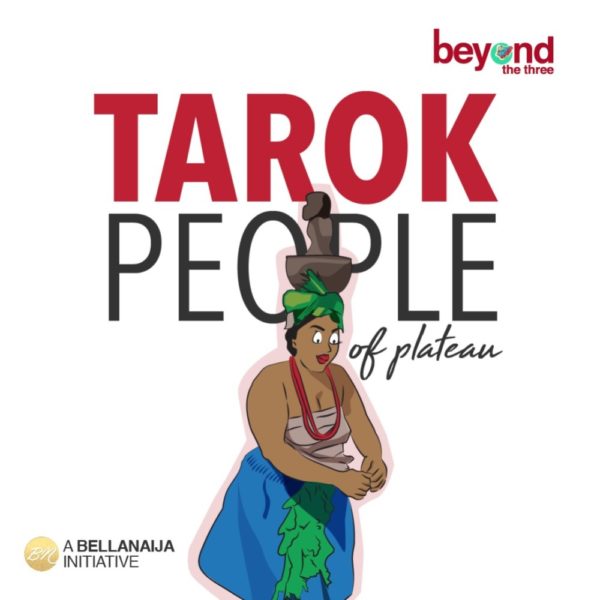 In the first edition of this series, we were introduced to the Idoma people; this was followed by the Esan people.  Joan introduced us to the Oegorok people and we learned about Bini people from Idia, and the Mhiships from Mwanret .  Ma’ade told us about the Bassa people.  We had the pleasure of reading about the Uwano people of the Weppa Wanno kingdom. Today, Tanchit has very graciously offered to tell BellaNaijarians about the Taroks.

The Tarok people are from Langtang in Plateau state and they’re the second largest ethnic group in the state. Tanchit tells is that the Taroks are proud of their heritage and are determined to preserve it, and this is evident in the traditional architecture that remains today. “This conspicuous architectural style sharply marks the boundary between the Ngas land and tarok land such that one gets the impression of a cultural change at the boundary”. She shares further: “Tarok people say that militarism naturally runs in their veins. This they say is the reason why the tarok are remarkably successful in the Nigeria armed forces such that it is rumoured that there is one military General in every squared kilometre of tarok land. The adventures of their men in the military had made the land famous and the son’s and daughters very proud” [SIC]
*****

What’s your language called? Do you speak it?
I am proudly tarok, though not a fluent speaker, but I comprehend fair enough.

Where is your village And how often do you visit?
My people are found in Plateau state Nigeria. I grew up visiting the village occasionally especially during festive periods.

Please share some unique cultural rites and practices of the Tarok people
One of our unique rites is the taroh cultural day festival which is known as Ilum Otarok which is an annual event that depicts the culture and tradition of the Tarok people of Plateau state.  It has been a uniting force for the Tarok people to come together as one family. The Tarok people have an ancestral cult, despite major inroads of Christianity into the area. They still retain considerable prestige and importance.

The ancestors {orim} are represented by initiated males and post-menopausal women. Orim are mostly heard and emerge as masked figures. They speak through voice disguisers. Each tarok settlement of any size has a sacred grove outside it which is conserved as the place of the ancestors. Men above a certain age are allowed to enter the groove and engage with the ancestors.

Naming ceremony and styles
The coming of a new born is a blessing to the parents and community. for the community to benefit from a new child’s birth, he/she must be alive to adulthood. as a result, children are initiated into the orim cult to prevent them from dying. children are named based on the circumstances surrounding the birth. names like Nanmwa which means God has provided. usually given because the parents had given up on having a child.

Marriage rites
Marriage is known as “ikam uchor” It is considered a social responsibility. Adults are expected to establish their homes. Its significance is seen during the death of an unmarried adult, where the play partners referred to as “onim gha ijam” will mark his exit with a traditional drama. Women of play partners referred to as ”ocha ga ijam” accompany footsteps of the corpse bearers, while pouring ashes and rolling a stone [igbongbar]

When a young man sees a young girl [uyenbyen] whom he likes, he uses body language to indicate interest. Thereafter, he toasts her with a gift, which in the past was not very specific, but mostly things soap and cream. Once the toasting rights have been secured, multiple dating is allowed until an open ceremony is held to determine the lucky toaster.
This is no longer accepted. However, there are still relics of these in some rural communities.

Gifts are presented to the mother. The man makes an offer for marriage known as “nvok igya“. He presents a headgear, pants, underwear and slippers. If these gifts are accepted by both the mother and lady, dating is said to have taken effect.

Afterwards, bride price payment of clothes, bag of rice, one big basin of beniseed azhin) ananjyol is given. There is also a requirement to build a round hut guest room referred to as “ijini” which will be used by the couple to freely relax whenever the man visits, but without sexual activity.

The father of the bride is given a big gown with trouser, and inner shirt and shoes. He is expected to be farmed for.
A “dir khaa godo” is given to maternal uncles and is considered as important also. Without it, the children of that couple will be regarded as that of the maternal uncles, no matter how long they have been married for.

An interesting fact about tarok weddings is that there is no fixed date to take a man’s daughter away for marriage. Instead, they elope; then the groom’s family sends a message to bride’s family informing them of their daughter whereabouts.

Ruling class and governance
The tarok people consists of an autonomous community of over twenty sub-clans. They reserve cultural rights over certain traditional rights that determines their status. Every sub clan has a spiritual leader known as ponzhi nbin. Before the advent of colonialism, he was also the political leader of the people. The ponzhi nbin institution represents the sovereign authority of the people/

Funerals and internment
Funeral rites in tarok land are also unique. The death and subsequent burial of an elderly mann is followed by ngaga that involves the beating of drums, chanting of incantations and wielding of spears meant to drive away death. This is followed by nken orim during which the spirit of the dead man is received and reunited with his ancestors and by extension, the people.

What I love about my people
Our passion for anything gives them focus and makes them committed. Your typical tarok man can die for his people- no kidding. they are fiercely loyal.

What I don’t like about my people
Despite all the modernisation, they still have this great prestige for their masquerades especially those that stop women from coming out. Announcements are made days before in preparation. Women do not move about freely at that period.

Native proverb
Ina’va ya ka’swal kat te, uponzhinan yi ya ‘ichinchin ana. [You do not have any human help. You can only depend on God]

I wish more people would know that tarok people are united and love each other so well.

Tanchit, thanks so much for sharing the Tarok people with us. Find out more about the series HERE. Click HERE to read more entries in the series.

Ask Shade About Trusts: What Should I Do About My Sister’s Husband?