BN Presents Beyond The Three: From the Gorombi Mountain Range, Lynda Presents the Yandang People 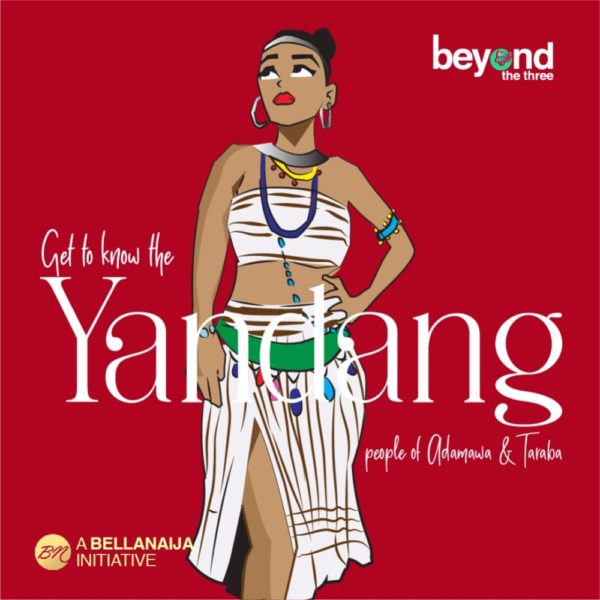 In the first edition of this series, we were introduced to the Idoma people; this was followed by the Esan people.  Joan introduced us to the Oegorok people and we learned about the Mhiships from Mwanret. Ma’ade told us about the Bassa people.  We had the pleasure of reading about the Uwano people of the Weppa Wanno kingdom. We were taken to Langtang to meet the Taroks, thanks to Tanchit. Moses provided us with insight into the Isoko people. Nhaoma shared the Ikwerres with us.  We’ve also met the Bwatiye people, thanks to Kada.

Today, we meet the Yandang people (sometimes spelled Yendang). They’re found in mayo-Belwa local government in Adamawa state and in Lau local government in Taraba state. Lynda tells us that the name came from “our distant cousins, The Mumuyes. They initially called us Ya-Dan,(the people across or the people outside), which later evolved to Yandang over the years. Before then, we called ourselves Nhwin Kuk, which means fellow town’s person.

In Lynda’s words, one interesting thing about the Yandang people is ” that because we were colonised in the 1950’s, we have living witnesses of colonisation and conversion to christianity. Although these witnesses are very old, I was lucky enough to interview them and get their oral accounts.”

**
What is your name and what does it mean?
My name is RubiYankuru. It means God watches over us.

What’s your language called? Do you know how to speak it?
We speak the Yandang language; sadly I am sadly not a fluent speaker, but I’m still trying to learn.

Where’s the home of the Yandang people
Our ancestral homeland is Gorobi, a beautiful scenic terrain that is surrounded by rock formations, undulating hills and table top mountains. We have 17 clans, which are divided into sub-clans and further divided into houses. These clans settled around the “Gorobi” mountain range, building their houses in the valleys and on the plateaus of the mountains. The tops of the mountains and the numerous caves provided natural fortification against slave raiders and invaders. This ensured that our culture and way of life was preserved well into the 20th century.

Have you visited your home town?
I’m ashamed to say that this past May was the first time in over ten years That I visited Uyange, my village. I am however a frequent visitor to Gorobi, my mother’s village.

We understand the importance of preserving the culture. What are some of the unique rites and cultures about the Yandang people?

Naming
Infants are usually named according to the situation of their birth. There is a story and deeper meaning behind most names. A name like Bonzinbaba, means “there’s no more guinea corn”. This name is given to a person born during a bad harvest year. My parents’ first child was named Tansiye, (good news)and their last was named Yegosibe, (it is finished). My name is RubiYankuru(God watches over us).

Dressing
For special occasions, we wear a cream and brown or ash striped handwoven fabric called “langtang.” (Not connected to the Langtang people from Plateau state as far as I know). Originally it was mostly used for burials, but in recent times it is sewn into any style of a person’s choice. 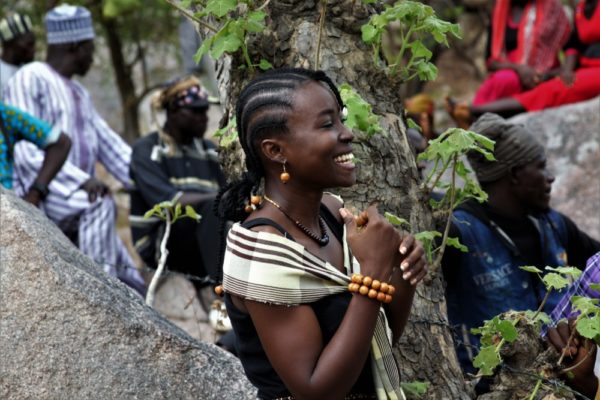 Food
We have various traditional delicacies. One of them is “vuu“, popularly called kunun geda in the North. It is a peanut milk gruel that is sometimes made with rice. It is a popular breakfast delicacy. For lunch or dinner, swallow made from millet is eaten with a draw soup called “son hoot”, or “dargaza” in other parts of the North. The local drinks are “bhi“, “loribi” and kunu. “Bhi” is locally brewed beer made with millet, while “loribi” is beer that isn’t fully fermented and can be drunk by children too. “Kunu” is the sweeter, non-fermented version of the two.

Marriage rites
Traditionally, marriages are the joining of two families, so parental consent is the most important thing. When a man sees a woman he wants to marry, he gives her a “mou“, a valuable iron used in making hoes and weapons. If her parents accept it, then he can bring his family to see her parents. 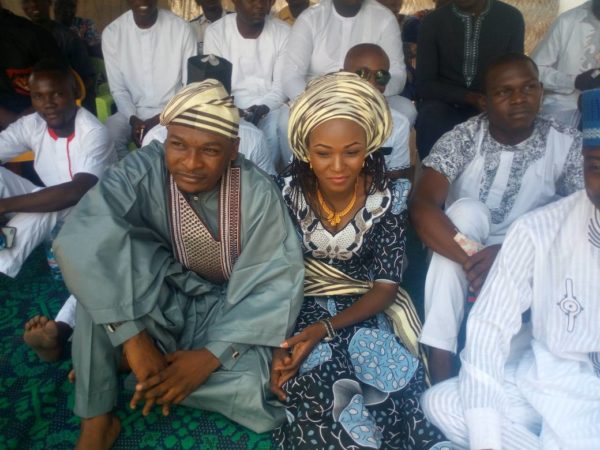 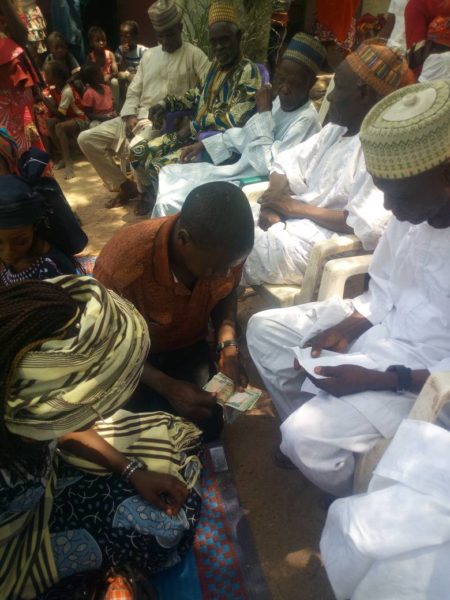 The engagement price, known as “hinlengki“,is paid to the parents. The suitor then builds a hut for his mother-in-law or pays the monetary equivalent. This rite is called “wah-konag“. The suitor is also expected to help his in-laws on their farms or pay the monetary equivalent. These services are further accompanied by the payment of a fully grown ram and two he-goats as bride price. The rest of the bride price consists of 28 items which can include a variety of items such as yams, beer, guinea corn, hoes, and “kansuki”( a rod held by women during dancing). In recent times, the marriage rites have undergone a lot of changes, but the constant/ compulsory payment is the fully grown ram and two he-goats and whatever the bride’s family stipulates as bride price. 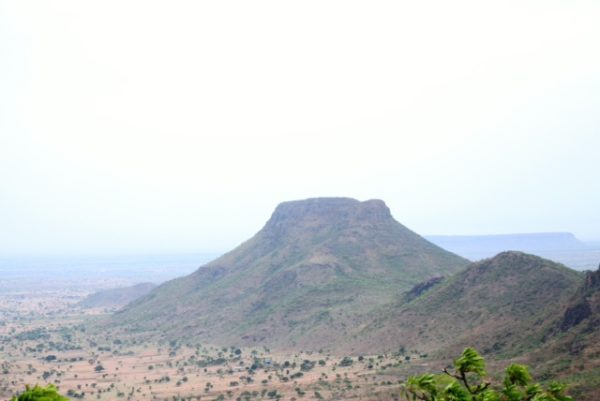 Identity and heritage
In Yandang culture a first child, (marrah), belongs to the mother and her people. This means that a “marrah” child traces their lineage matrilineally. If the first child is male, he grows up with his maternal relatives and is taught to hunt and farm by them and when the time comes, initiated into manhood by them. When a first born son is getting married, his mother’s family organises his wedding and they help him pay the bride price. when he dies, he is also buried by them.

A first born daughter is not required to grow up with her mother’s people, but she is expected to run errands for them whenever she is called upon to do so. When she is getting married, it is to her maternal relatives that her bride price is paid to, and they’re responsible for buying the household items for her new home. when she dies, it is they who bury her. The “marrah” system creates a balance of power between families and helps in strengthening kinship ties. As a result of this system, my sister who is the first born, is from a different clan and village from the rest of us. 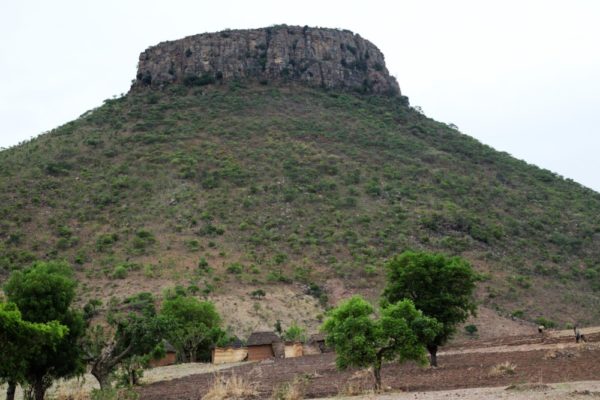 Wow, that is interesting. Tell us about some unique Yandang cultural and religion festivals
A solar deity called “Ruu or Rubi” is worshiped as the supreme being, along with the spirits of the dead ancestors. An annual festival, “herra yawhithi” or “Yandang day”, is held at the foot of our ancestral mountains on the first week of may. The festival is done to usher in the rainy season and to pray to the ancestors for a fruitful farming year. 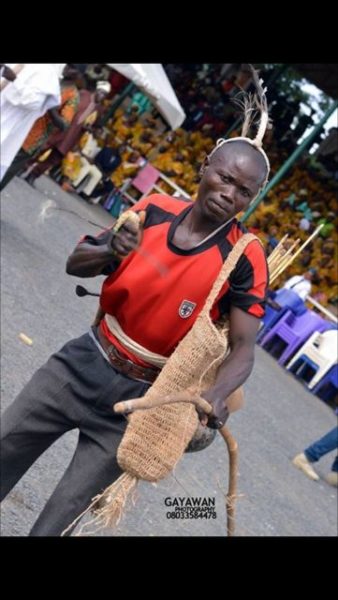 Another festival that is held is the “bhoki tuka“, which loosely translates as the tying of the knife. It’s a circumsicion festival held every four years to initiate young boys into manhood. 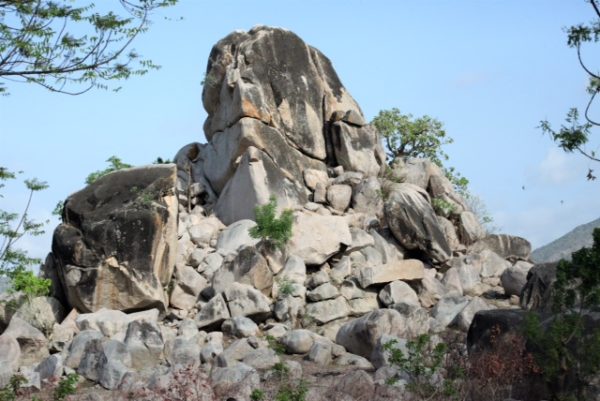 What’s that thing you don’t really like about Yandang culture?
Traditionally, the Yandang culture is a democratic, egalitarian society that recognizes no kings or chiefs. Important decisions concerning the welfare of the people are presided over by the oldest male in each family. Each age group of initiated, circumcised men form a military class that defends the village against external attacks and enforces law and order within the village.  Although it has its merits, it is also one of the things I don’t like about my culture, because it makes unity and cooperation very difficult since every man considers himself a king unto his household.

I also don’t like is the rapid erosion of our language and culture and it’s replacement by Hausa/Fulani culture and language. Basic greetings in my language contain a lot of Hausa and Fulani words. A lot of the younger generation, such as myself, speak Hausa as a first language with little to no knowledge of their mother tongue. Hopefully this will not lead to language extinction if we start working now to remedy the situation.

What’s that thing you love most about your people?
What I love about my culture is the resilience of its people. When our ancestors migrated into a mountainous region that had sandy soil strewn with rocks and no large body of water, they found a way to survive in the harsh environment. They learned to survive with minimal water by depending on small natural springs on the mountains. They learned to cultivate the rocky soil in the valleys and around the mountains. Despite the harsh environment, they adapted, survived and thrived. 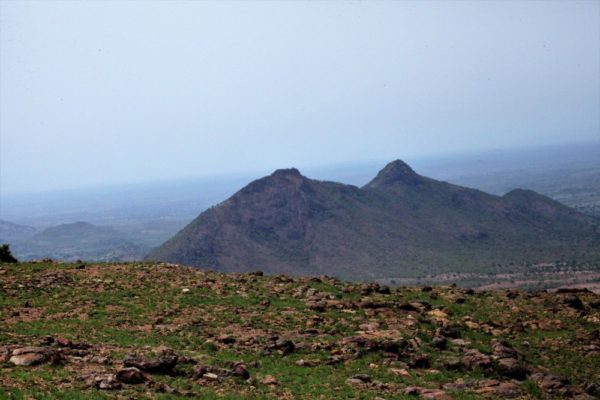 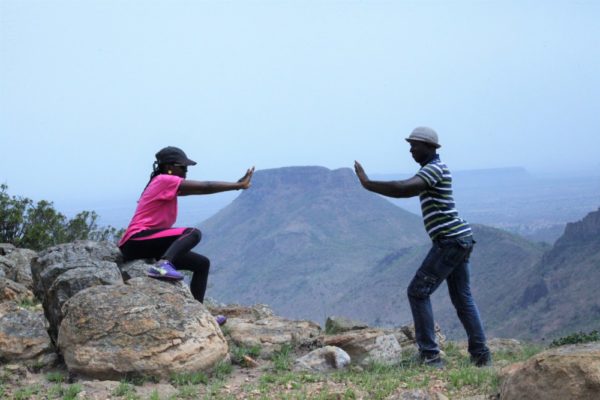 Before we conclude, please share a Yandang proverb with us.
“Le be ka foribi a zayaka” this is a proverb that means “you cannot call poverty riches”.

“Le man a banheen le ta wu hah“. This means “To kill a wild animal, you must hide behind a big tree”.

We love the proverbs on Beyond The Three. Thank you so much for sharing your people with us, Lynda.

They were the Perfect Lovebirds?! Episode 5, Season 2 of Stephanie Linus’ Reality Show “Make Me Fabulous” is Here

The Daily Vulnerable by Chude Jideonwo: Come and carry your Pedestal Biko