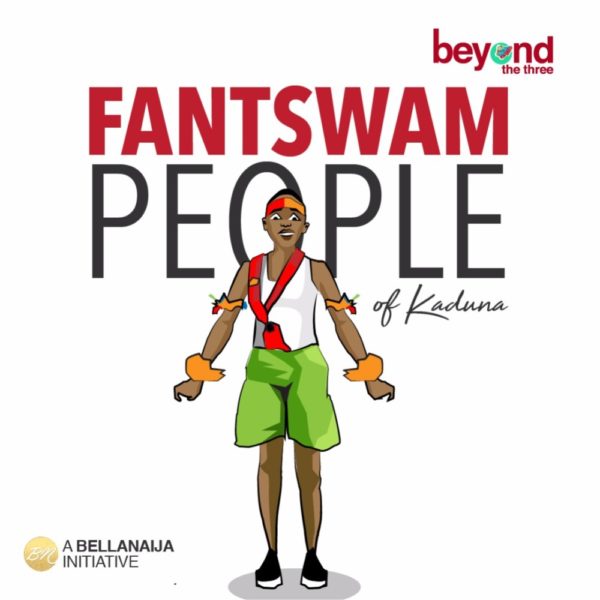 In the first edition of this series, we were introduced to the Idoma people; this was followed by the Esan people.  Joan introduced us to the Oegorok people and we learned about the Mhiships from Mwanret. Ma’ade told us about the Bassa people.  We had the pleasure of reading about the Uwano people of the Weppa Wanno kingdom. We were taken to Langtang to meet the Taroks, thanks to Tanchit. Moses provided us with insight into the Isoko people. Nhaoma shared the Ikwerres with us.  We’ve also met the Bwatiye people, thanks to Kada, and the Yandangs, courtesy of Lynda.

Today, Kandyi takes us to Kafanchan in the southern part of Kaduna State, to meet the Fantswan people. Kafanchan is a commercial hub in the state and home to other tribes, but the Fantswams are the indigenous to the town.
***

What is your name and what does it mean?
My name is Kandyi and it means “One who has seen the future”

Tell us about your language and your tribe, in general
Fantswam is the indigenous name of my tribe which is also called Kafanchan. Kafanchan is the adulterated version used by settlers such as the Hausas, who could not speak the language. Kafanchan is also the name of our territory/ town. I do not speak it fluently but understand it a little and can say a few words.

How often do you visit your village?
I visit my village at least once a year,mostly during Christmas holiday.

Naming style
In Fantswam culture, the responsibility of naming a child is on the parents of the child. However, close relatives such as grandparents, uncles and aunties are also allowed to name the child. The naming ceremony is done seven (7) days after the birth of the child and it is usually a small event consisting of just a few friends and family.

Weddings
When a young man is interested in getting married to a young lady, he informs his father, who also informs other senior members of the family. An investigation is carried out on the background /family of the young lady to determine if it is a good one – devoid of scandals, strange illnesses, curses etc. If they are satisfied with their investigation, the young man accompanied by his father and some elders from his family, seeks audience with the young lady’s father to express their intentions.
The young lady’s father in turn informs his kinsmen and they also carry our an investigation on the young man’s family. If the result is satisfactory, they invite the young man’s family for a formal introduction of both families where the young man is told the amount to pay as dowry. He is given a list of items to buy for the bride to indicate commitment and desire to marry her.

After the young man fulfills that obligation, the lady is given to him as a bride and the couple receive the blessings of both families.

Next will be the wedding ceremony; it could be big or small depending on the financial status of the parties involved. With the advent of Christianity (which is the most practiced religion among Fantswam people), the couple also receive spiritual blessings and counsel from the church.

Ruling class and governance
The traditional head of the people is the paramount ruler who is called “Agwam Fantswam”( King of Fantswam ). Under him are six district heads who govern the six districts that make up the chief domain namely; Manyii, Zikpak, Adwan, Yanshi, Zibin and Takum districts. These district heads are called Hakimi.
There are smaller administrative units under each district and they are called dakatai (villages). Each district is headed by a dakaci and under each dakatai there is a ward and each ward is headed by an administrative head called Gora (ward head). It is the smallest administrative unit in the entire governance structure and it is so structured for ease of governance.

Furthermore, there are two councils – Council of King makers and Traditional Council. The council of King makers is saddled with the responsibility of selecting the paramount ruler in the event of any vacancy resulting from death, resignation, or any other thing that that makes it impossible for the ruler to perform. It is always chaired by a member of the Makatanak cland. This person has to be the eldest or most knowledgeable and by virtue of their being on this council, they cannot aspire for the stool of the paramount ruler. They are automatically disqualified. They are also saddled with the responsibility of purifying the stool and its occupant.
Of the six districts only four are heirs to the stool and they are, Zikpak, Manyii, Zibin and Takum.

The headquarters of the Fantswam chiefdom is Zikpak. In the event of any vacancy, interested candidates to the stool indicate their interest to the council of King makers through the chair. The council scrutinizes them and then nominations are made. A recommendation is then made to the state government for the Governor’s approval.
The traditional council is made up of the Agwam Fantswam (paramount ruler) who is the chairman and it is the highest administrative and decision making body in the chiefdom. Other members of the council consist of the council secretary, the six district heads and prominent traditional title holders such as the Waziri, Dalhatu etc.

Outfits
The people of Fantswam were mostly hunters and farmers. So, their mode of dressing is just a piece of animal skin tied around the waist to cover the nakedness. This applies to both male and female. The women were usually bare chested and the men carried a bag made of animal skin slung across their shoulder containing their bows and arrows.

Food
The traditional food of the Fantswam people is waken gida (big multi colored beans). It is usually cooked as porridge with vegetables. Another one is tuwo and miyan karkashi with kunun zaki.

Festival
A cultural festival we celebrate is the Fantswam day which takes place on 26th December annually. Its significance is to show appreciation to God for protection and blessings throughout the year. Before the arrival of Christianity, the appreciation was to a deity dear to the people.

The festival also signifies fertility and prosperity of the land, continuity and unity – considering the cosmopolitan nature of Kafanchan which is home to people of different tribes from all over Nigeria. Due to the crisis faced by the community in recent times, the 26th of December has been dedicated for prayers and thanksgiving to God for restoration, peace,unity and prosperity.

What I don’t really like about my tribe would be our conservative nature, compared to some other tribes.

Please share a Fantswam proverb with us
“Adana sak sakwat andi” (If only it were possible to see the future by just looking at the surface of the water). This means, no one knows the future.

Kandyi, thank you so so much for telling us about the Fantswam people. We truly appreciate it.

Ibukunoluwa Ajayi: Leaving The Past Behind

BN Literacy Drive: Does Television Do More Harm than Good? by Favour Ojo