Michael Afenfia: Which is the Better TV Show? Forbidden Or Ajoche? 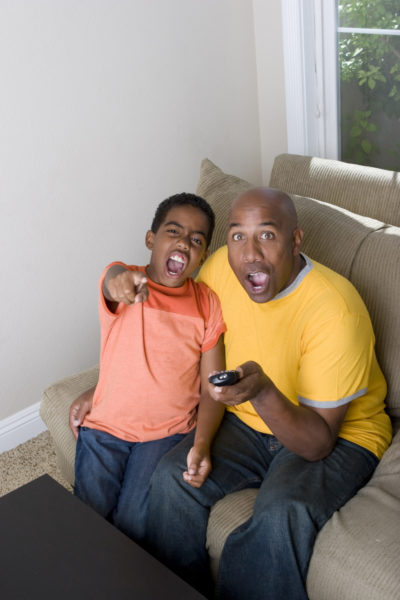 The other day, I walked into an argument between my kids. I really didn’t want to be dragged into that particular discussion, but the moment they sighted me in the living room, I knew there was no escaping. As far as they were concerned, my addiction to television and the fact that I write stories more than qualified me to be the decider on the matter.

That was how I became the arbiter, charged with the responsibility of deciding which was the better TV show between Forbidden and Ajoche, two shows that have been showing one after the other every week night on DSTV channel 151 for some months now.

It was a strange argument they were having really, because these are two different kind of soaps, but my boys felt the need for the comparison, because maybe something about the way I pick and choose what shows to follow and how critical I can be sometimes have rubbed off on them. But that is a story for another week.

While Forbidden is a contemporary series set in present-day Nigeria, Ajoche is a period piece set in a time I cannot decipher with exactitude – although judging from the references to white people, the costumes and setting of the drama, it is safe to conclude that the writers of the series must have had the period between the 18th and 19th century Africa in mind to situate their story.

I say this advisedly, because the cast are dressed in loincloths, are involved in crude battles and live in mud huts without electricity. I know some of you reading this are thinking that you know places in modern-day Nigeria that are still like that, even now in this world of glass houses, high-rises and skyscrapers. Again, that is a story for another week.

Forbidden has a cast of veterans, known faces and a smattering of newbies. Ajoche is mostly kids, some unknown and not-too-popular actors and a handful of old-timers. Forbidden features some notables like Norbert Young, Tina Mba, Theresa Edem Isemin and Kunle Remi, from whom one would have expected more in terms of role interpretation and fluidity.

Sola Fosudo, Rakiya Attah and Charles Etubiebi are the standouts for me, but there’s really not much they can do to save an average script. The credit roll lists researchers, but I wonder what kind out research was done to come up with the office scenes and dialogues, especially those between a very stiff Kunle Remi and an ultra-plastic Toni Tones.

Ajoche, on the other hand, stars Femi Branch, Hilda Dokubo and Keira Hewatch as some of its more well-known cast members, but even the child actors like Nifemi Lawal who plays the young Alechenu is so believable, some of the guys from Forbidden should be taking acting lessons from him. With every episode of Forbidden that I have seen, someone acts so badly, that the novice in me just wants to reach inside the TV screen and pull them out.

I find the storyline in Forbidden weak, forced and unbelievable. All that fake accent jars the ears and I’m hoping that at the next major programme-scheduling meeting of Multichoice bigwigs, they would consider a more entertaining or engaging use of that primetime slot.

Again, to contrast both shows, except for a few contradictions and inconsistencies in Ajoche, like how people and fashion manage to stay exactly the same despite the passage of time, the acting rings true. The characters come across as believable, as you grow to love or loathe them. The kids in the show certainly have a bright future in acting, should they and their parents decide to make acting a more permanent gig.

Ajoche is good. Tunde Aladese and her team of writers deserve more than just a perfunctory accolade. So, I’m sure by now you can tell what team I belong to and who won the argument.