James Amuta: Up North - A Breath of Cinematic Fresh Air 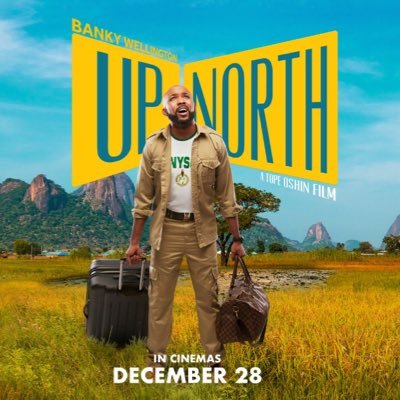 The film, Up North, is in itself a film school with a robust curriculum that offers lessons on often neglected aspects of filmmaking (in Nollywood), ranging from production values, artistic merit, creativity, scale, spectacle, collaborating with various organs of government to make films, clever insertion of product placement, using film to advance national unity, using film as a medium to promote tourism, using film as a subtle medium to highlight the achievements of the present administration in Bauchi State, using film as a platform to foster a cleverly laid out propaganda to market the people, cultural resources, and tourism potentials of Nigeria.

Up North took filmmakers to school, as the producers communicated in fluent film language, demonstrating to the world, and especially to Nigerian corporate and government leaders, that film could be deployed as much more than a vehicle to entertain millions, but as a catalyst to promote any worthy campaign be it political or commercial, without losing its primary objective which is to entertain.

But to embark on such an ambitious task, to school an entire industry which has been comfortable in putting up sitcoms on the big screen, and trying to sell made-for-TV movies to cinema-going audiences, the team behind Up North had to check a few tough boxes.

Up North scored very high with its assembly of amazing actors who delivered note-worthy performances, made even more remarkable by the fact that the film pulled in the best of talents from the Northern and Southern parts of Nigeria, in a blend that worked better than a confluence of tomato and pepper in a pan of hot oil already sizzling with diced onions. The love interests had believable chemistry, surprisingly between Banky W and the character played by Rahama Sadau. However, Kanayo O. Kanayo was easily the MVP of the entire film, with his charismatic portrayal of a Machiavellian businessman inadvertently caught up in a pissing contest with his prodigal son.

Directing, Tope Oshin made this film like she was frustrated by the status quo; with a point to prove, she embarked on a journey to shatter preconceptions about Nigerian films. She made a picture that seems to scream, “go big or go home,” as she set Up North on such a scale that dwarfs a lot of films vying for the viewers’ attention this Christmas season. How big can you go to top a sequence with over 100 horses and camels? How big can you go to top a sequence set in a stadium with over 3,000 background actors, and a cameo from a seating state governor in your film? How big can you go to top being given the keys to a state to make your film – with the full support and participation of the Emir – to film a dramatic, fictional sequence in one of the most significant cultural festivals in Africa?

The best production designer in the world is nature, and the film Up North employed her service and utilized her masterful creations to set the tone for a romantic comedy that looks and feels like a National Geographic travelogue, and will make you fall in love with love and nature, all over again.

The product placements were cleverly executed on a scale, and with effortless creativity, as have never been successfully achieved by any other Nigerian film in recent times. The worst thing that can happen to a brand’s effort to place its product within a film is when the audiences know that you’re trying too hard to shove your advert down their throat – when it’s done without tact, and most importantly, when the brand or product being placed has no function in that scene. Up North made no such mistake. In fact, one of the scenes that got people applauding in the middle of the film was a clearly but cleverly and creatively executed product placement for Samsung mobile phones. The placement was so functional in the scene – it was simply ingenious – and the audiences reacted by applauding. Wow.

But the biggest product placement in the film is Bauchi State itself, and by extension, the governor of Bauchi State. The film, with all its creativity, production values, and artistic merit, can be argued to be a feature-length commercial for Bauchi State – unapologetically, but creatively promoting the culture, government, tourism potentials, sports, and hospitality of the people of this beautiful state.

In conclusion, Up North is a breath of cinematic fresh air in Nollywood, a worthy theatrical offering from Nigeria to the world. A film that does not miss a beat with its impeccable comedic timing and dramatic spectacle – a film best enjoyed with friends and family. A film that has taken Nigerian filmmakers back to film school, teaching with fluent and audible film language, as it demonstrates the possibilities that abound when filmmakers seek out and pursue the participation and collaboration of traditional leaders and stakeholders in government from local, state, and federal levels.

Up North has just raised the bar so far, proving that a Nigerian comedy can go farther than the usual slapstick fanfare set in one location, where everyone is trying so hard to be funnier than the other person in order to break box office records. Up North demonstrates that a comedy can still have character, be dramatic, ambitious, set outside of Lagos, devoid of pretentious glamour and gloss, imbibe scale, and still be a hit with audiences.

I’ll not only recommend Up North, but I’ll recommend you see it at least 3 times, always in the company of a loved one.

Oh, and please ignore the film’s trailer. This is perhaps one of the few times a Nigerian film offers a truckload more than what its trailer promised. In fact, one of the few flaws I see in this film is that the trailer does very little to prepare you for how much fun you’re going to have watching this film – it saved all its incredible moments for the film itself – and these moments occur roughly every 3 minutes throughout the entire duration of the film.

Nnamdi Omesiete: 10 Books to Read For the Holidays

Controversy over Screening of Genevieve Nnaji’s “Lionheart” in Nigerian Cinemas