Oris Aigbokhaevbolo: Up North Takes Advantage of the Paucity of Northern Stories in Nollywood 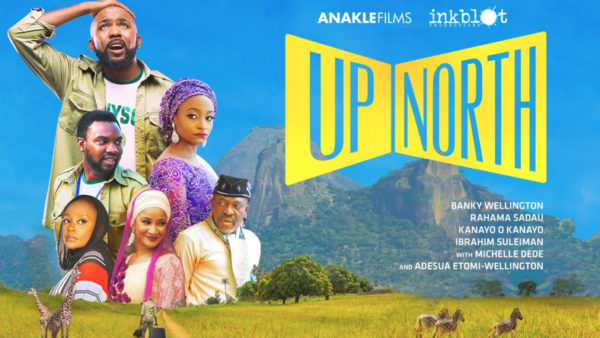 The last time Banky W was in a movie (Wedding Party 1 and 2), he had too little to do. In Anakle Film’s first production, Up North, he’s doing a lot—maybe a little too much in playing the film’s lead role.

He is Bassey Otuekong, son of a wealthy businessman (played by Kanayo O. Kanayo) expected to take up the family business, but he seems overly fond of social media to care. He posts on Instagram frequently, and gets posted to Bauchi, the north of the title, for his NYSC.

One of the first things he gets into is trouble with one of the locals who accuses him of taking photos of people praying. His accusers don’t seem to understand English; he doesn’t understand Hausa. The disagreement is resolved by Mariam (Rahama Sadau), a teacher who understands both languages. In time, Bassey and his initial accuser would come to face each other again, but in a different context.

Popstar power can be tricky in films. The wattage might threaten the entire enterprise, leading a film to become little more than a musician’s extended music video. But by making Banky W the lead actor of their film, the makers of Up North have played a very smart hand: his star power is made indistinguishable from the stardom needed for the role.

It is smart but also a problem because Banky, despite the roles he’s played in his many music videos, isn’t quite an actor. Not yet. In Up North, he never comes to embody the uneasiness of a rich kid in a different environment. The film itself never really shows the material difference between the newcomer and his posting. But maybe that is too ambitious for this Tope Oshin-directed picture featuring as much landscape shots as close-ups, because Up North is mostly a commercial for northern Nigeria, and as with publicity campaigns, the aim is to make the subject look good—the parent production company, Anakle, is, after all, a digital marketing outfit.

So, Bauchi might be in our news bulletin for one thing; but it is in Nollywood for some cinematic laundering. At some point, the touristic imperative of the film is bolstered by the appearance of the state’s governor. According to reports, he went through a couple of takes before satisfying the filmmakers. Makes me think: don’t we all wish Nigerian governors were as serious in nailing their roles in governance? In any case, the film has a decidedly stagey feel to some scenes—as though the expansive landscape shots have been replaced with cardboard boxes when some acting is required.

As for the story, it follows a predictable path. Bassey has to battle some resistance in his coaching a group of girls who have joined his physical education class. Bassey’s own battle with his father, essentially a dick-measuring contest, reaches a less predictable ending that deserves applause for its clear-eyed insight into the intractable nature of father-son relations.

Another aspect worthy of applause is the clean use of pop up shots showing Bassey’s Instagram activity on the screen. I didn’t care much for the comments themselves, but the form in which they appeared onscreen brought some effervescence to a largely placid film. At the end of the film, I wondered how much better the film I’d seen might have been if the vim and innovation of those pop-ups filtered into the story itself.

But emphasis on getting that bit right and the less than innovative nature of everything else in Up North is perhaps inevitable for Anakle Films, a branch of a company clearly more focused on tech than on cinematic storytelling, so that if a hierarchy exists here, it is tech and money first, then tourism; at last, you get whatever ideas of cinema the makers have—and, as it turns out, these guys do know a thing or two about certain phrases in cinema. For example, there is a scene showing Bassey running after what is supposedly an emotional turn of events, which means the filmmakers seem to know that in cinema, running in such a circumstance is meant to be a kind of emotional catharsis for the character. However the makers of Up North appear unaware that this only works if the director of photography finds an appropriate atmosphere and shot. Also, it only works if the screenwriter finds a way to make the audience become invested in whichever character is running and the plot turn. In this instance,  both screenwriter and DOP fail to create the right atmosphere, and the scene is just another physical exercise for Bassey/Banky.

But even if you are not familiar with this type of signaling in movies, you might notice that some of the more obvious things. Notably, people picking up and losing their command of English at will, are not given sufficient attention. At the end of one race, the whole town cheers the winner and you have to wonder if nobody in the area supports any of the other participants. And there is the all-too-common, but incredibly unimaginative habit of using popular songs to convey emotional states.

Thankfully, this happens fewer times here than in Oshin’s previous film, New Money. It is easy to see how these lapses have happened: as with most tech firms these days, the goal for Anakle going to Nollywood is disruption, that faddish term, not artistic satisfaction, not even the merging of both. Perhaps Up North is probably just content looking to take advantage of the paucity of northern stories in Nollywood.

That might be admirable politically, but it can’t be the only nail to hang your trousers on. For the lackluster nature of Up North’s cinematic ambition, it seems about right to tell its makers: “Thank you, next.”

BN Book of the Month: Tunde Leye’s Afonja – The Rise