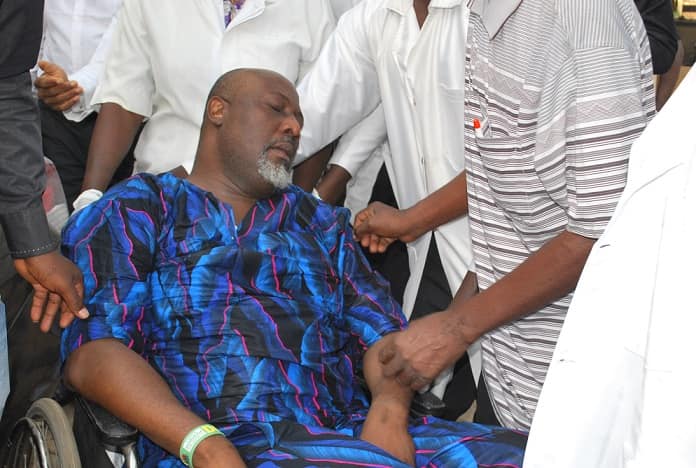 Senator Dino Melaye has been moved from the Police Clinic, Abuja to the DSS Medical Facility, still in the city, the Police said in a statement on Friday.

The statement, signed by Force PRO DSP Jimoh Moshood, debunked media reports that masked men “whisked” the senator away from the hospital.

The police statement added that Melaye is under investigation for attempted culpable homicide, and that the Force has obtained a warrant to remand Melaye for 14 days.

SENATOR DINO MELAYE UNDER INVESTIGATION BY THE POLICE FOR CRIMINAL CONSPIRACY AND ATTEMPTED CULPABLE HOMICIDE, CURRENTLY IN POLICE CUSTODY ON A FOURTEEN (14) DAY REMAND WARRANT OBTAINED FROM THE FEDERAL CAPITAL TERRITORY (FCT) HIGH COURT, HAS BEEN TAKEN FROM THE POLICE HOSPITAL TO ANOTHER GOVERNMENT HOSPITAL FOR FURTHER MEDICAL ATTENTION

Senator Dino Melaye under investigation and currently in Police custody on a fourteen (14) day remand warrant obtained from the Federal Capital Territory (FCT) High Court on 9th January, 2019, for the offence of criminal conspiracy and attempted culpable homicide, committed on 19th July, 2018, when Senator Dino Melaye and his armed thugs attacked Police personnel, shot and wounded SGT Danjuma Saliu on stop and search duty along Aiyetoro Gbede, Mopa Road in Kogi State, has been taken to another Government hospital for further medical attention.

3. The Police Investigation Team obtained a Fourteen (14) day Remand Warrant from the Federal Capital Territory (FCT) High Court on 9th January, 2019, to keep Senator Dino Melaye in Police Custody for investigation into the case of criminal conspiracy and attempted culpable homicide against him till 23rd January, 2019.

4. It is incorrect as reported in some sections of the media that Senator Dino Melaye was moved by masked armed policemen to an undisclosed location and that his where about is unknown.

5. The Police Officer, Sgt. Danjuma Saliu, is yet to recover from the gunshot injury he sustained during the attack and still under intensive medical care in the hospital.

6. Senator Dino Melaye will be prosecuted along with other suspects on completion of investigation