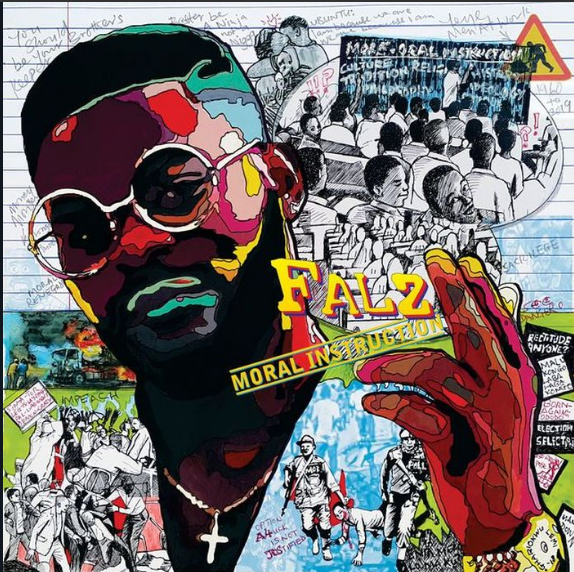 Welcome students, I would like everyone to take seat, it’s time for class. Now some weeks ago you had a different teacher in the person of Falz, but today I will be taking over. The class is however on the same issue: Moral Instruction.

This class is divided into nine topics. They will be taken one by one for an in depth understanding. First is Johnny, this song is metaphorical. It talks about “Johnny” a Nigerian citizen and all the possible things he might go through just because he is a Nigerian in Nigeria. These things vary from crises to police brutality for failure to give ‘egunje’, attacks by Fulani herdsman and various other things Nigerians go through. I will also like to ask, E yan melo lo ma ku? (How many people will die?)

Next up is Follow Follow, the general message behind this song is for one to live according to ones means. Instead of thinking of how to make ‘bread’ some people think of how to ‘blend’’. It is important to stop the need to fake flex and comparing oneself to others. Everyone makes it at his or her own pace.

Is everyone really a Hypocrite? I’ll say not everyone but definitely some. This particular song talks about how people generally don’t practice what they preach. From voters who see only “two jokers” vote for one but still complain, to the lack of respect for human rights and also those who act like gentlemen outside but engage in domestic violence behind closed doors. We need to do better as a people, we need to stop complaining if we’re not going to speak up and do something about it.

Now it’s time to Talk. This was an introduction to the album as it was released (with a video) prior to the release of the entire album. It talks about the deplorable state in which our country is in. We as Nigerians truly bought this administration’s story but weren’t given any ‘change’. The touchy topic of transactional sex was talked about in this song which created uproar on social media. Other issues talked about were tribalism, the minimum wage and also double standards when meting out punishments on thieves (i.e. the common man and the corrupt officials). In a country where the tenure is for four but one goes on a three year holiday, what do you expect?! Well, na him talk am o, no be me talk am!

This class is going well so far, can I get an Amen? This song talks about our religious addiction in this country which I totally agree with. Well, as Falz said, if his sermon annoys you then probably the shoe fits.

Are you your Brother’s Keeper? I believe that the message behind this song is that we should try to empathize with other people’s situations. We have this “no send” attitude towards a lot of things that happen around us. Officials use tax payer’s money to flex, civil servants are not paid, and fake drugs are sold just so cash can be made. This is sad, I think we should all be our brother’s keeper because at the end of the day no be only you dey this world.

How far are people willing to go because of Paper? A.k.a Money. With recent developments I think the answer is clear, people are willing to do anything really. From rituals, to drug trafficking, child marriage, election rigging, etc. People loose themselves in an attempt to make money, they throw away their morals because they want to “chow dollar”. Tragic.

Baba Fela talk am but E no Finish. Right or Right? This song talks about how there has been no significant improvement in the lives of citizens. The country is still riddled with unemployment (take the access bank recruitment for example), ASUU strikes which is in fact my present reality! Nepotism is still very much a thing in the country. There are so many things to talk and even Falz himself can’t finish. So, when e go finish?!

Now After All Said and Done we all have a part to play in making this country better. As Falz has rightly said in this beautiful spoken word, “if we remember to react and repeatedly refuse to be content with mediocrity, only then can we be free.”   In other words, Our Mumu Don Do. It’s time to get up and do something.

I am not going to argue about whether or not Falz is the modern day Fela, what I can say is that he is one Nigerian artist who is truly concerned about the state in which Nigeria is in and is vocal about this through his music. Well done Falz!

Imoter Kpengwa: Our Focus Should Be on Ability & Not Ethnic Zoning

A second year law student at the University of Lagos. I am a highly motivated and hardworking student with a passion for writing