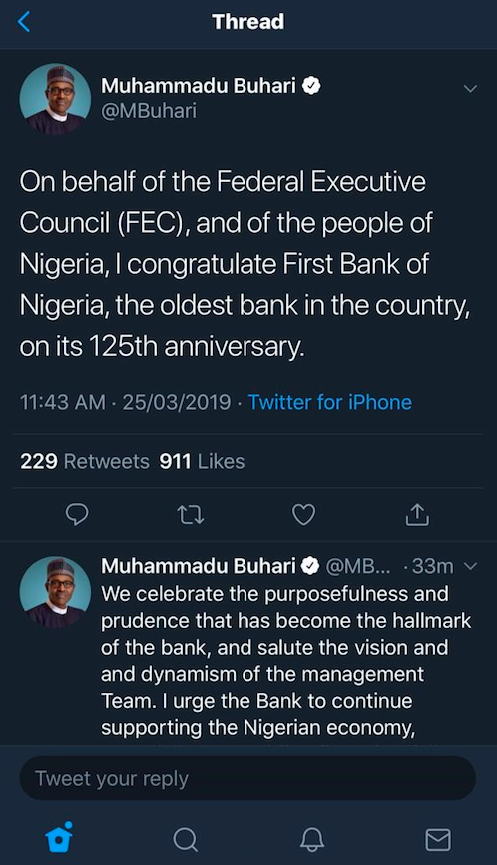 President Muhammadu Buhari on Sunday in Abuja congratulated First Bank Nigeria on its 125th anniversary, which he said “historically and remarkably marked the commencement of banking in the country in 1894’’.

In a statement by his Special Adviser on Media and Publicity, Femi Adesina, the president felicitated with the bank on behalf of the Federal Executive Council (FEC) and Nigerians in general.

President Buhari joined the financial services industry, particularly the banking sector, in celebrating “the purposefulness, prudence, and propriety that has become the hallmark of the bank for more than a century and quarter’’.

He also congratulated the Board, management, and staff for upholding the vision of the founder, Alfred Lewis Jones.

The President saluted the vision and strength of character of the management in providing a voice for the Nigerian economy by rendering competitive financial services that had culminated in the spread of branches across the country, Africa and Europe.

According to him, as the oldest bank in Nigeria, the FBN has lived up to the expectation of customers over the years, both private and public, necessitating its survival and continuous service as a formidable training ground for many Nigerian bankers and chief executives.

He noted that such chief executives had also established banks and served the country as Governors of Central Bank of Nigeria (CBN).

While celebrating the milestone and great achievements of FBN, the president commended banks in the country for generally supporting government policies in buoying the economy.

He especially lauded banks for their renewed focus on infrastructural development and providing financial lifelines for businesses.

He, however, urged them to always explore partnerships that would benefit the country and promote trust.

First Photos from the Lord’s Achievers Awards! From Architecture to Agriculture – These 8 Young Nigerians Stand Out