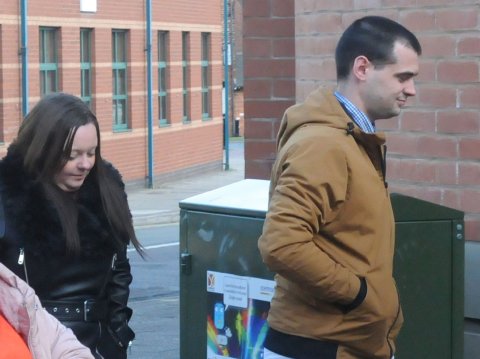 A court is hearing a case of a young couple who are alleged to have killed their two months-old son following an argument about not having sex, due to their newborn child.

Metro reports that, Luke Morgan, 26, and Emma Cole, 22, allegedly killed their son, Tyler Morgan, following an argument about money and their sex life inside their flat in Burntwood, Staffs in 2014.

During the hearing, their neighbours recounted that Morgan got angry because he wanted to have sex with Cole but could not because their baby was still awake. The couple both deny murder, manslaughter, causing or allowing Tyler’s death, and child cruelty.

The court was later told that Tyler had collapsed when his chest was compressed or after he was “intentionally smothered”. Also, the jurors report that there was a delay before the paramedics were called by the parents who described the incident as a cot death.

While arguing his case, the Crown prosecutor, Andrew Smith, showed jurors a picture of an injury to Tyler’s right forearm which pathologists said resembled a human bite mark. He said:

Tyler Morgan, the nine-week-old son of the defendants, had collapsed before the call was made. The prosecution’s case is that Tyler’s collapse was caused by his being intentionally smothered or his chest being compressed. That intentional smothering and/or chest compression occurred when the defendants were alone with Tyler in their home.

Subsequent investigations discovered that Tyler had sustained serious injuries before his death, including fractured ribs, that could only have been caused while he was in the care of his parents.

The trial is expected to last for up to six weeks.

It’s a #DubaiFaceOff with Uche Jombo, Omoni Oboli, AY Makun, Alexx Ekubo & YOU Can Be a Part of It!

Ronke Bamisedun’s Consistency Winning the SABRE Awards Back to Back is so Inspiring!