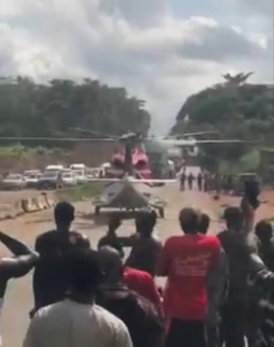 Few days ago, a clip went viral on social media, showing a helicopter landing on the Benin-Ore road, between cars in a traffic jam, to pick up an unidentified person.

Following the incident, the Nigerian Civil Aviation Authority said it has commenced an investigation, according to Punch.

The General Manager, Public Relations, NCAA, Sam Adurogboye, said the regulatory agency is aware of the viral video of the helicopter that landed on the highway and had ‘commenced investigations’.

A source from Tropical Arctic Logistics Limited, who spoke on condition of anonymity, told Punch that the helicopter was cleared to carry out the flight.

The source said the helicopter landed because there was a medical emergency, contrary to the speculations that the helicopter was sent to pick up a woman.

Expert Warns of “Climate Apartheid” between Rich and Poor

Major Growth for First Bank as it announces over 27,000 Agents on Firstmonie Network