People Are Talking after Tinubu & Atiku Meet at Abuja Airport 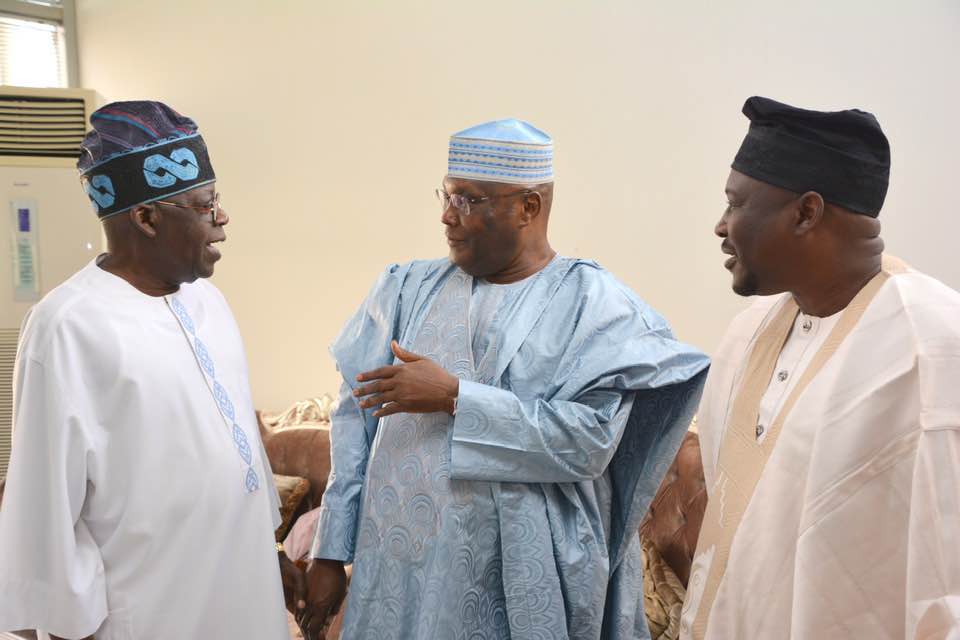 They’ve been opponents, then allies, then opponents again, and, bumping into each other at the Nnamdi Azikwe International Airport, Abuja, All Progressives Congress (APC) National Leader Bola Tinubu and People’s Democratic Party (PDP) presidential candidate Atiku Abubakar had a brief chat.

Tunde Rahman, the spokesperson of Tinubu, shared a photo from the meeting on his Facebook. He wrote:

Asiwaju Bola Tinubu and former Vice President Atiku Abubakar exchanging views when they ran into each other at the Nnamdi Azikwe International Airport, Abuja. Asiwaju was on his way to Minna, Niger State to receive an honorary doctorate degree from IBB University, Lapai and former VP, Kaduna for a wedding. They were flanked by Adamawa State Governor Ahmadu Fintiri.

Of course, Nigerians have had a lot to say about the meeting. Check them out:

TODAY: Tinubu, Atiku & Fintiri
Lesson.. If you kill yourself cos of politicians… You are on your own…. ??

No permanent enemy and no permanent friend…. pic.twitter.com/0tH8i5Ae8d

No difference o! All na same. TINUBU and ATIKU dey plan the next selection.

A Lesson to Learn!

If these politicians don't fight themselves, it is meaningless for we the followers to. pic.twitter.com/XJzQseQqo1

I hope those of you that would rather kill yourselves over Tinubu vs Atiku can still remember they're both friends from way back and they're still billionaires and extremely connected. No be war. https://t.co/DdYuiqt24f

Lesson.
Don't kill yourself because of politicians. pic.twitter.com/5wMuOl45m9

Atiku Bola Asiwaju and Tinubu Abubakar
Cheering together
And we are fighting because of them
Politics is just a 419 game,
They only used us to archive their selfish interest… pic.twitter.com/6KgCDUESs8

DO NOT DIE IN THEIR WAR!

Many died, perished and made enemies just because of these two political figures hereunder, months ago.

Did you see anything like party logo on their baban Riga?? Are they fighting one another? Tinubu a national Leader with Atiku the biggest opposition to his Party… pic.twitter.com/uanIHLTAt8

The Nigerian Medical Association says only 42,000 Doctors are Available for 200 Million Nigerians

Pepskru, Nigerian Lingerie Fashion Brand taking over the Retail Market as they expand their RTW Line.