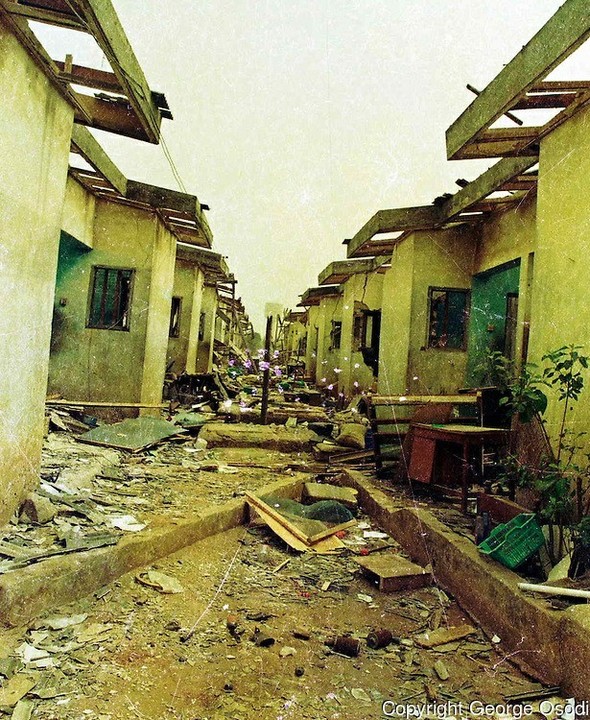 Today, the 27th of January, 2020, marks 18 years since the devastating incident that took the lives many soldiers and their families, and also left several people injured,  at the Ikeja Military Cantonment and Storage Area, Lagos, near Isolo and Onigbongo.

According to Wikipedia, “On the afternoon of 27 January, a fire broke out in a street market being held next to the base, which was also home to the families of soldiers. At around 7 pm the fire apparently spread to the base’s main munitions store, causing an enormous explosion. This blast killed many of the base staff and their families and immediately destroyed several nearby streets, flying debris starting numerous fires further afield. Tremors from the explosion also collapsed many buildings in the area, trapping people in the ruins and starting new fires from damaged cooking appliances. These tremors were so powerful that windows shattered 15 km away and the blast could be felt more than 50 km inland”.

On the streets of Twitter, Nigerians are remembering that fateful day when some were still little kids playing around, some traders hustling for their daily bread, while many were just strolling through when they heard the blast and fled in different ways, jumping into the canal. Some lost loved ones directly in the blast, or in the collapsed buildings, the stampede, or through new fires that built up through other explosive gas.

May their soul continue to rest in perfect peace.

I was in my house in Apapa, relaxing and getting prepared for work on Monday. The bang was loud, the house shook. Everyone in my street rushed out, afraid to stay indoors Incase the house collapsed because of the mad shaking. It was crazy https://t.co/yggLPaSlfI

18 years since the bomb blasts at the Ikeja cantonment. Hundreds of people needlessly lost their lives at Oke Afa & Ajao estate. May they continue to rest in peace.

The site of the mass burial of those that lost their lives in stampede in the January 27 2002 Ikeja cantonment bomb blasts is just walk distance from my house, Will make sure i stop by there this evening and say some words of prayer to the lost souls.

On this day 16yrs ago, it was a bright Sunday for all of us at Ikeja Military Cantonment. We never knew it'd end up becoming a black sunday.

Some of us are yet to get over the trauma of #IkejaBombBlast on 27th January 2002.

I swear, I still remember the testimonies of some who escaped the canal in church. Small me couldn't understand why people were dying in Oke-Afa and cantonment dey Ikeja.

I can still recall vividly what happened on the 27th of January, 2002.

I still remembered how I got to the canal with my 2 kid brothers and my aunt… My aunt urged us to get into the canal but…[ ] pic.twitter.com/7tkqpfWvBo

Where were you when the Ikeja Cantonment Tragedy happened? I was in Gbagada when the first boom when off. The ground shook and I knew something terrible had happened. Jan 27, 2002.
May the lost souls continue to R.I.P.

The army cantonment is in Maryland while we lived at Federal Highway Patrol Barracks in Bank Anthony/ Oba Akinjobi road Ikeja. We felt the vibration & saw buildings shock like it was going to crash. People like us living upstairs had to run downstairs without even taking anything

On this day Jan 27 2002, my childhood dreams was nearly shattered with the Ikeja cantonment bomb blast, lives were lost and now inverting this fucking date, Kobe Bryant died in a crash commemorating this day as a black one. #jan27

I remember shortly after leaving Sobi cantonment, I was something else. That military indoctrination got to my head.

If anyone makes a little mistake with my order, I return and ask for my money back. Lol. Always making trouble over little stuff.

I was at the Madrasah (Ile kewu) in Ikeja Military cantonment at the time it started, our teachers sent us home, my sisters and I ran all the way home to meet our door locked, my dad (a soldier) and mom had been searching for us, everyone was trying to get out of the barracks.

I was close the cantonment, visiting a friend on Oduduwa crescent, GRA. And we had passed the airport road earlier that day and noticed OBJ came to Lagos. So we concluded it was a coup. Then glass doors and windows came crashing and everyone took off.

Hmmmmmmm! That faithful Sunday evening inside our compound at Jibowu, Yaba Lagos. I got to know the next day on my way to school (Mafoluku Grammar Schl) that it was bomb blast at cantonment and immediately I imagined how it was felt in my area despite the long distance.

Rest in power to those who died at the cantonment bomb blast and those that died at the Ejigbo swamp!