For a lot of men, their first sexual encounter was through rape or sexual assault. From the nanny to the housekeeper, the school-teacher, seniors in secondary school boarding houses, and trusted family members, boys face a lot of sexual assault. Around the world, at least 1 in 6 men have experienced sexual abuse or assault.

All over the world, rape against boys is prevalent, but it is more worrisome in a lot of African countries and Nigeria where  substantial data to back this up is hardly available.

We live in a society that tells men to ‘man up’ or ‘behave like a man’ when they are in difficult situations. The idea of ‘manning up’ is to encourage (or in many cases, force) men to withstand pain and do odeeshi when they are hurting. The society raises men to believe that only women should show emotions and men who cry or are emotional are effeminate and weak.

The effect of forcing boys to ‘man up’ is that the culture of silence is being heavily propagated and promoted. In most cases, when boys find themselves in a fix, they shut up and look for solutions by themselves. When they cannot find solutions, they ‘man up’and live with the pain and trauma. In many cases, these sexually abused and emotionally traumatised boys grow up to become sexual abusers and emotionally unavailable or manipulative men.

A recent tweet by Ayo Bankole started the conversation on male sexual abuse on social media. 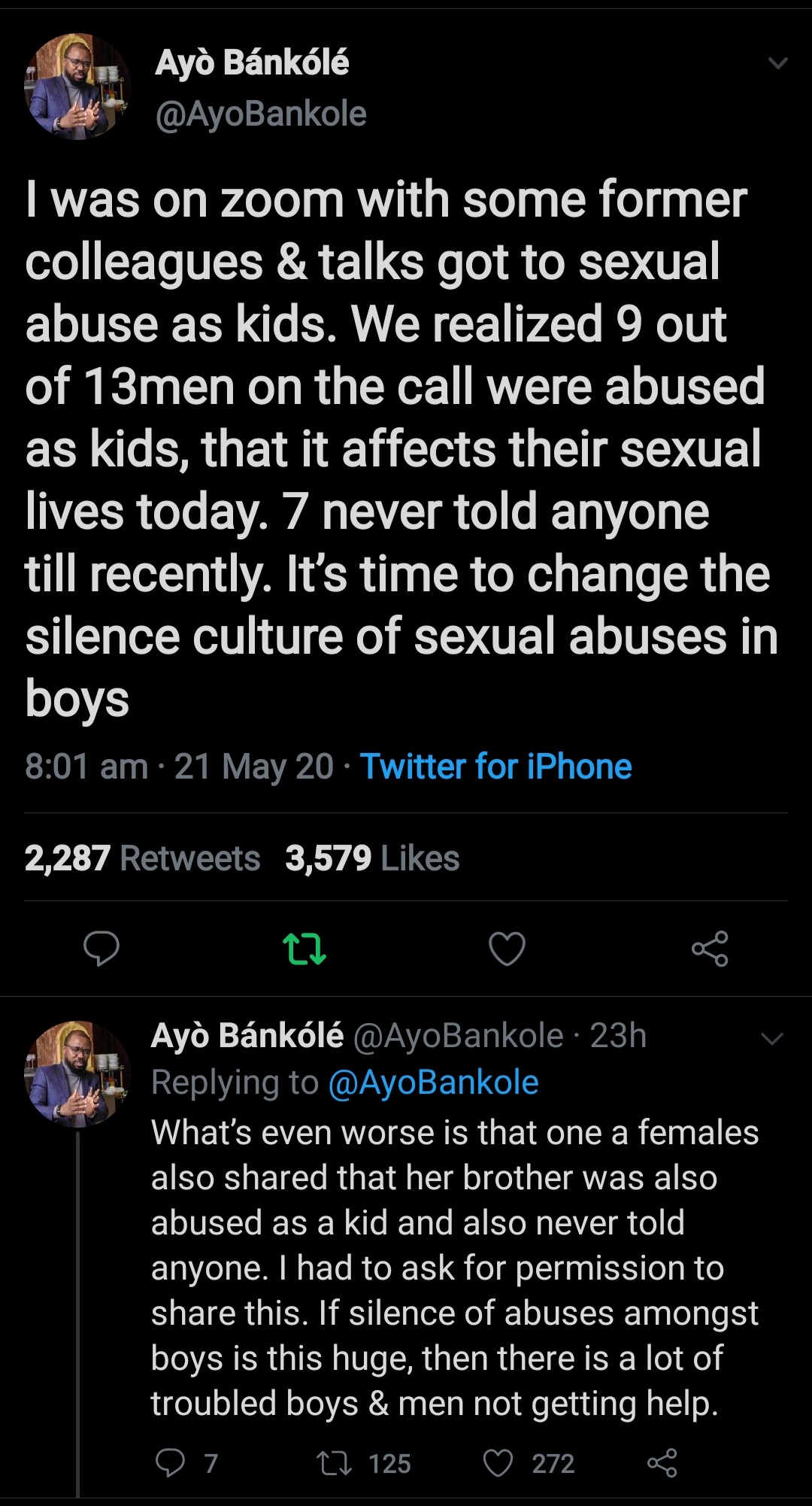 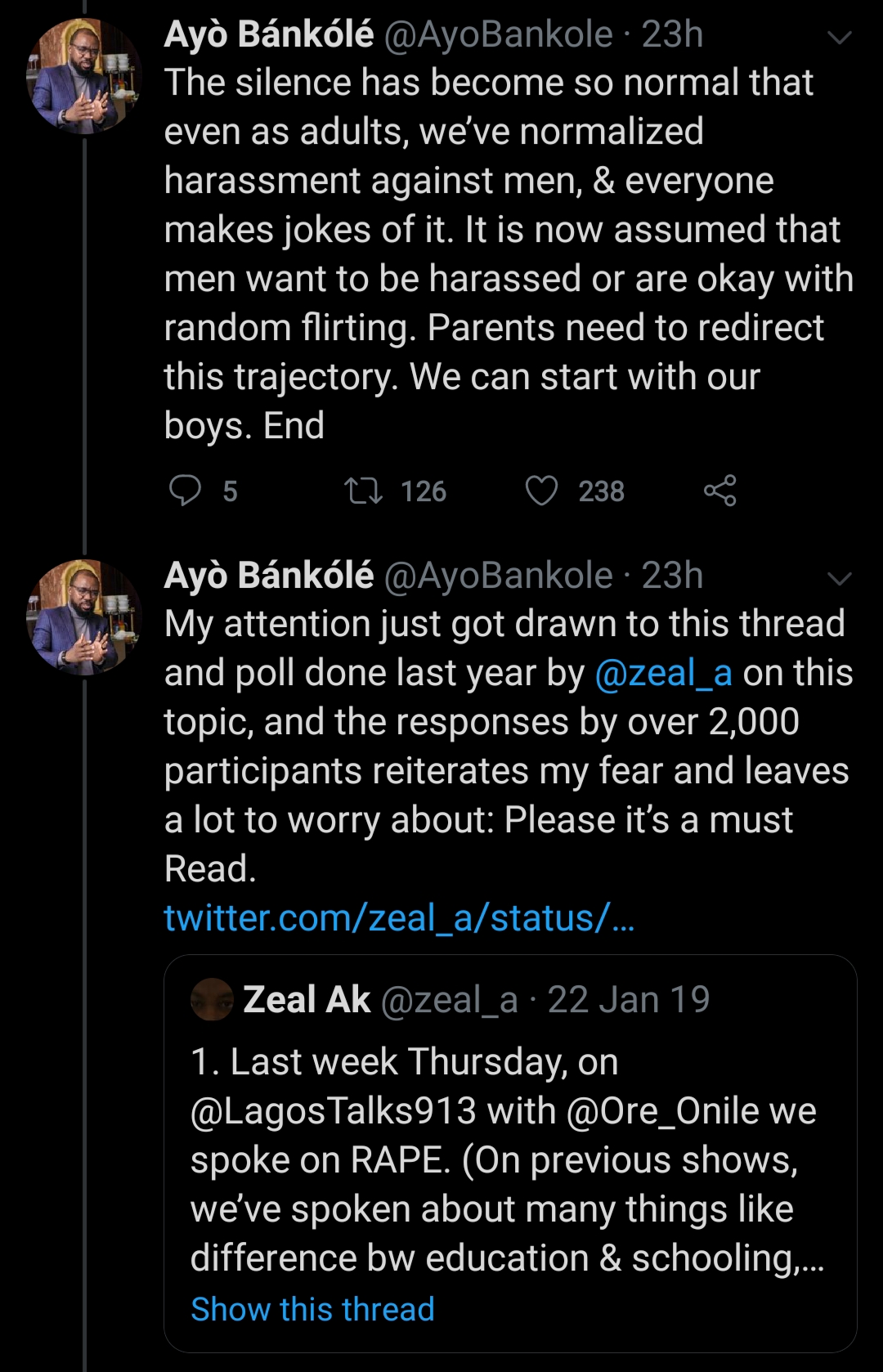 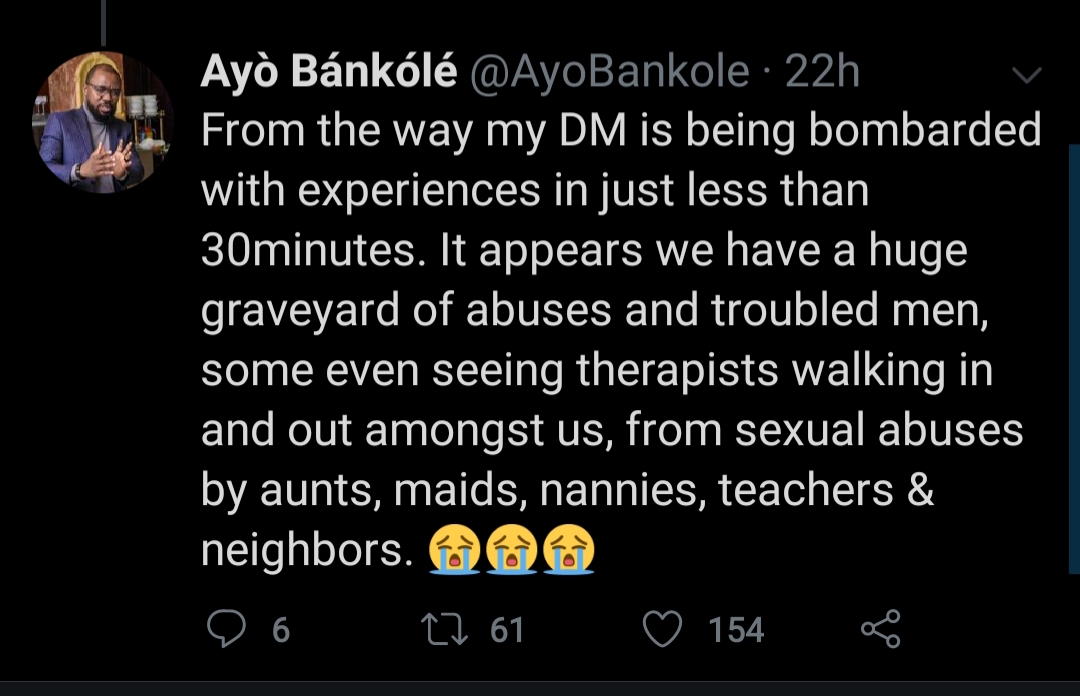 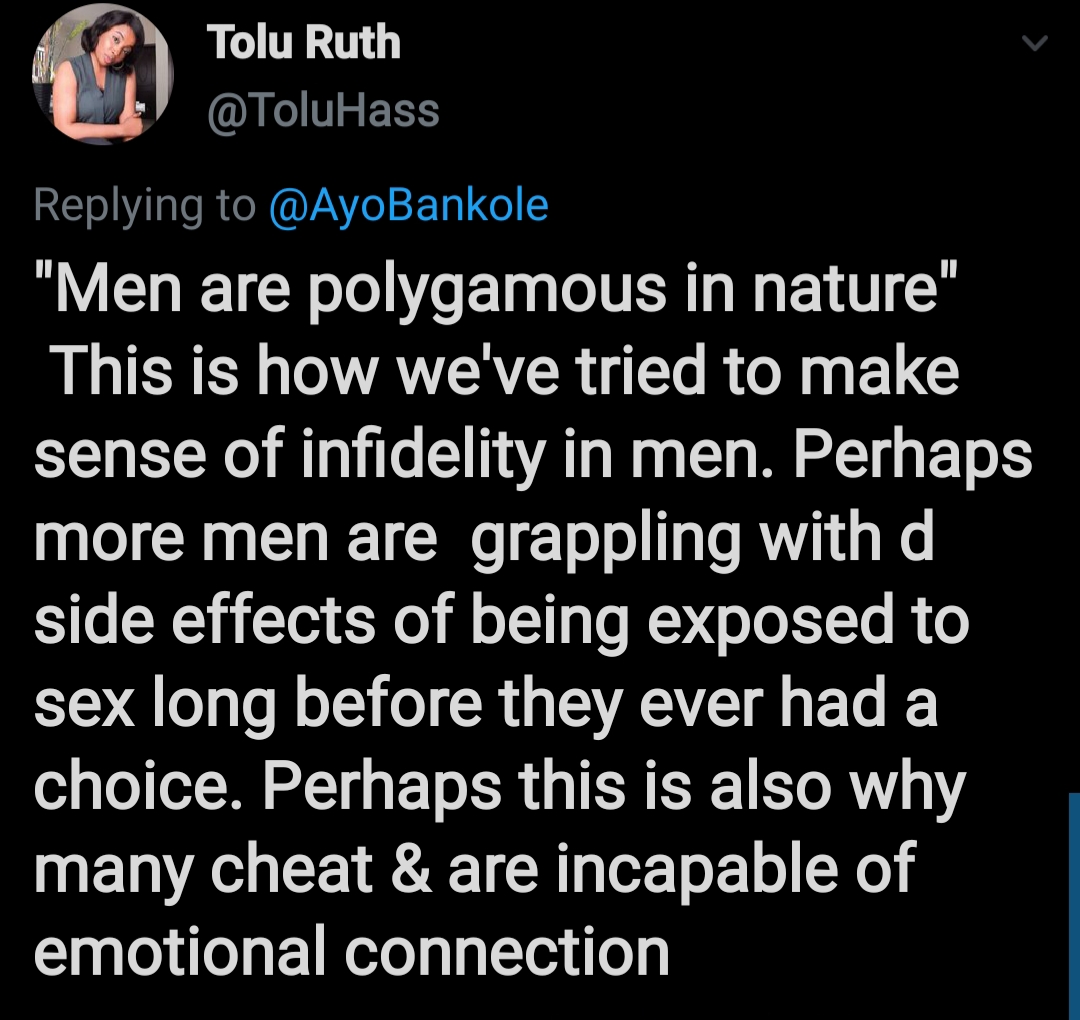 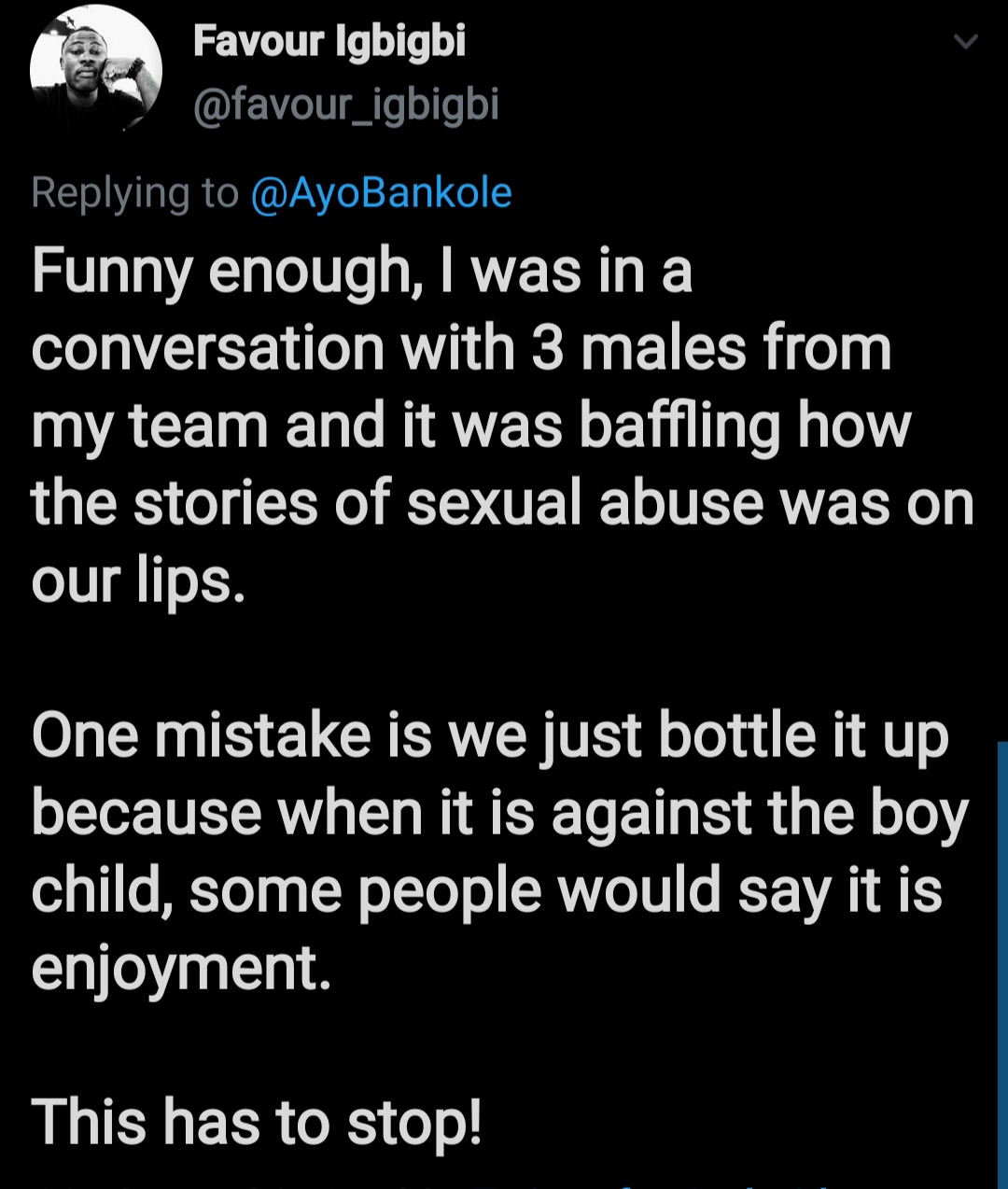 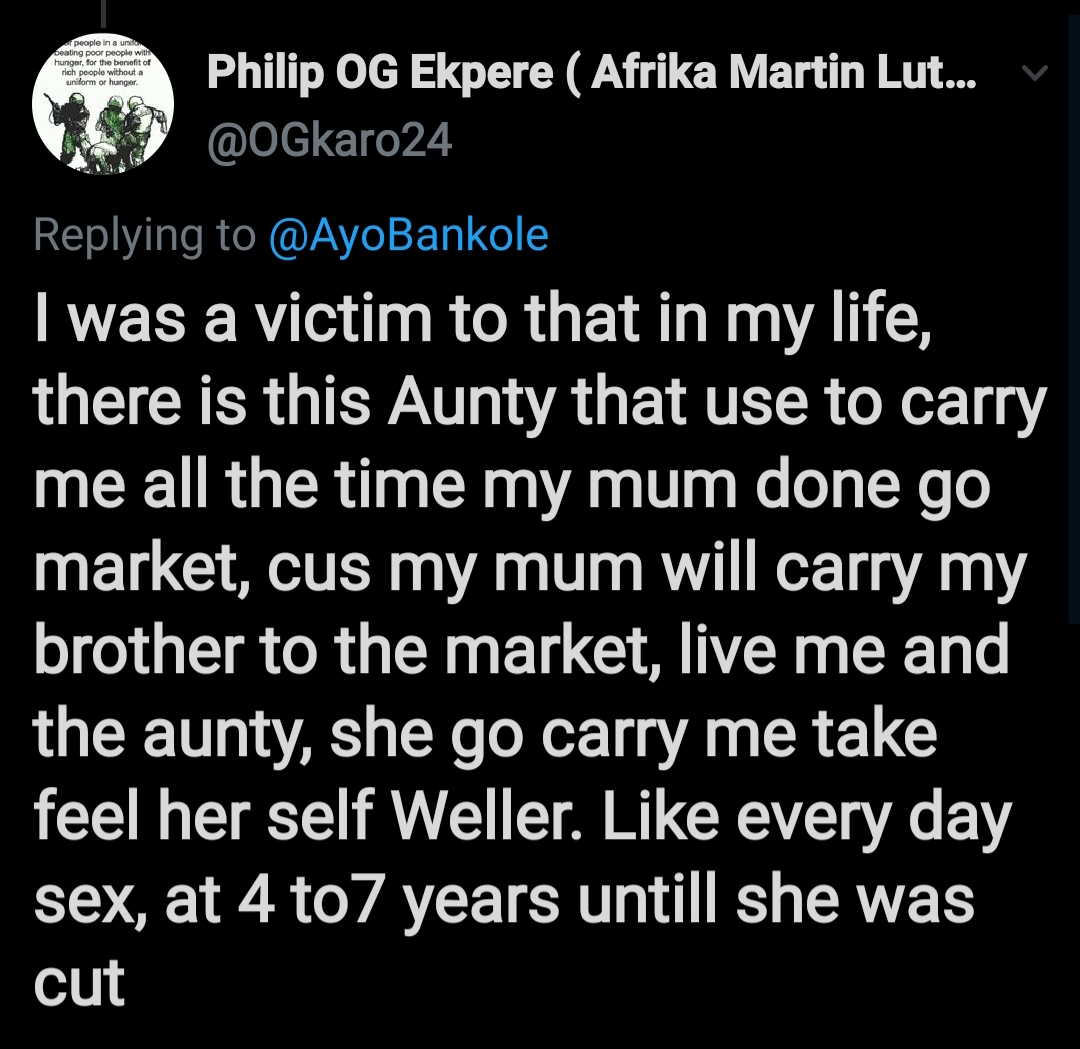 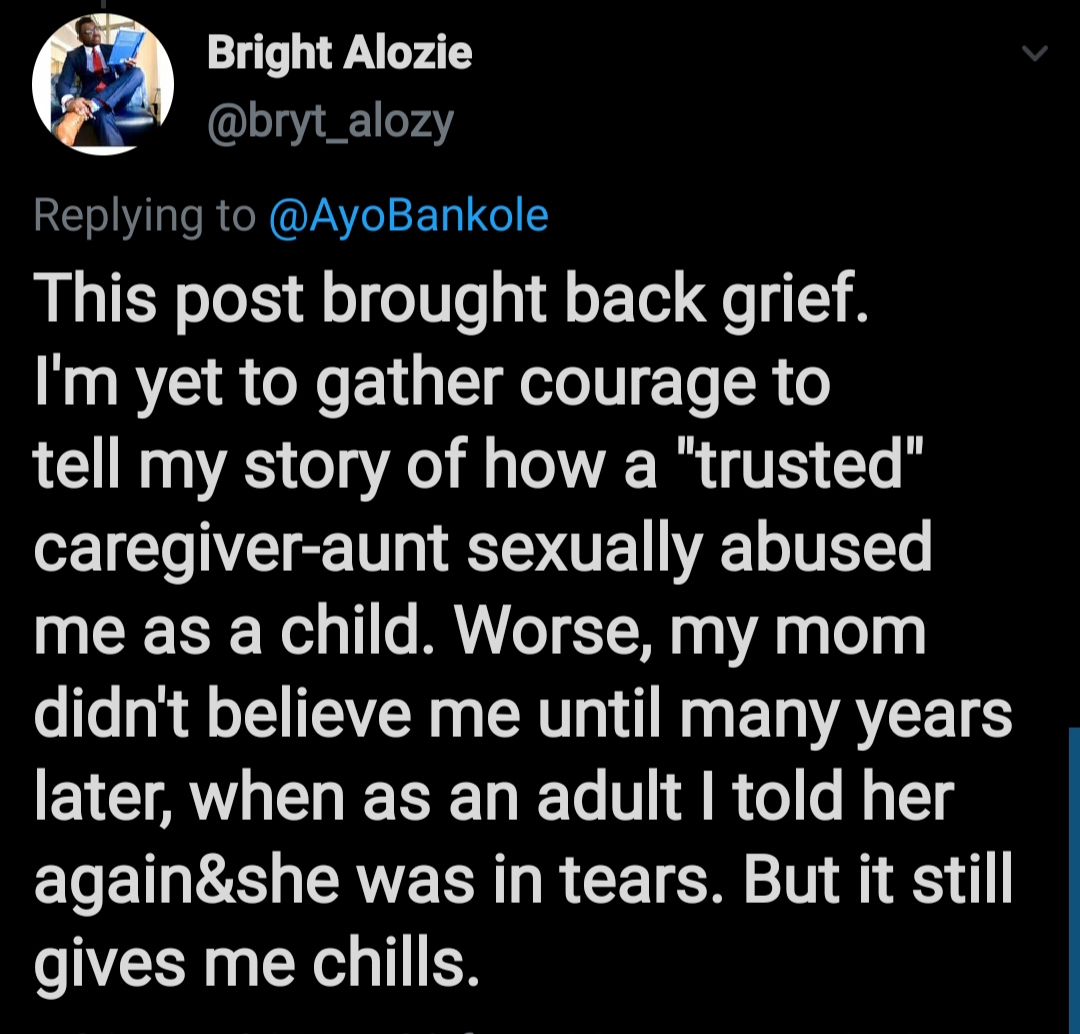 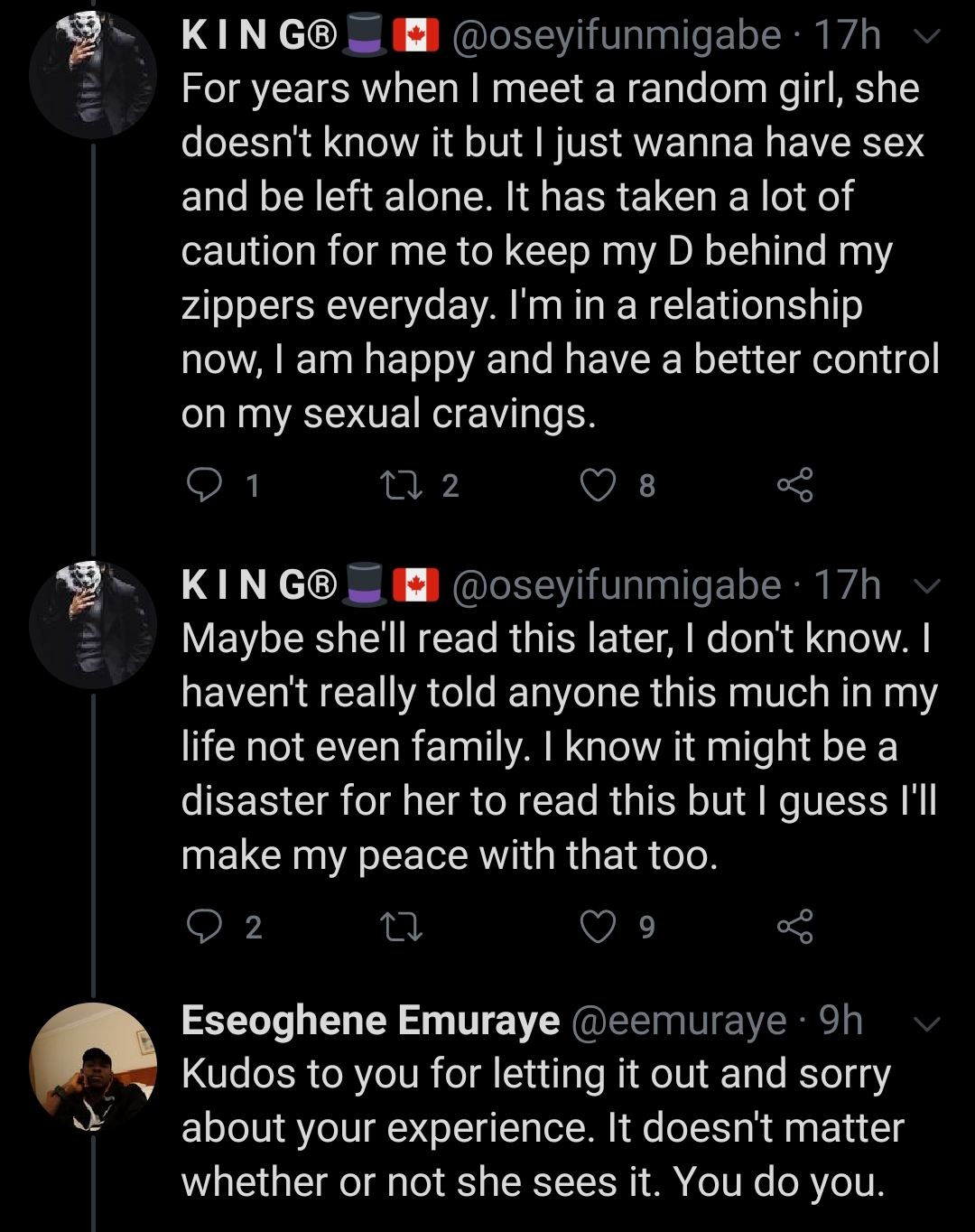 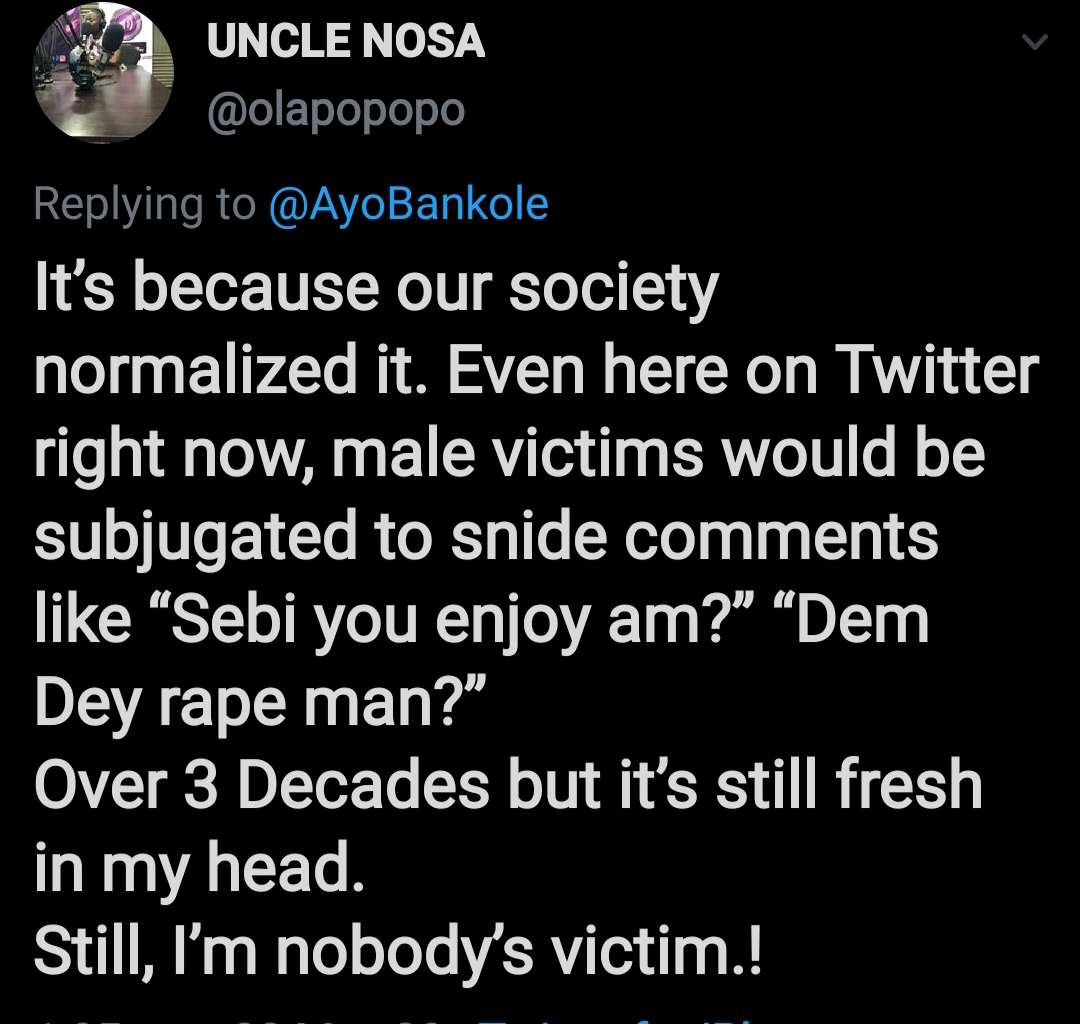 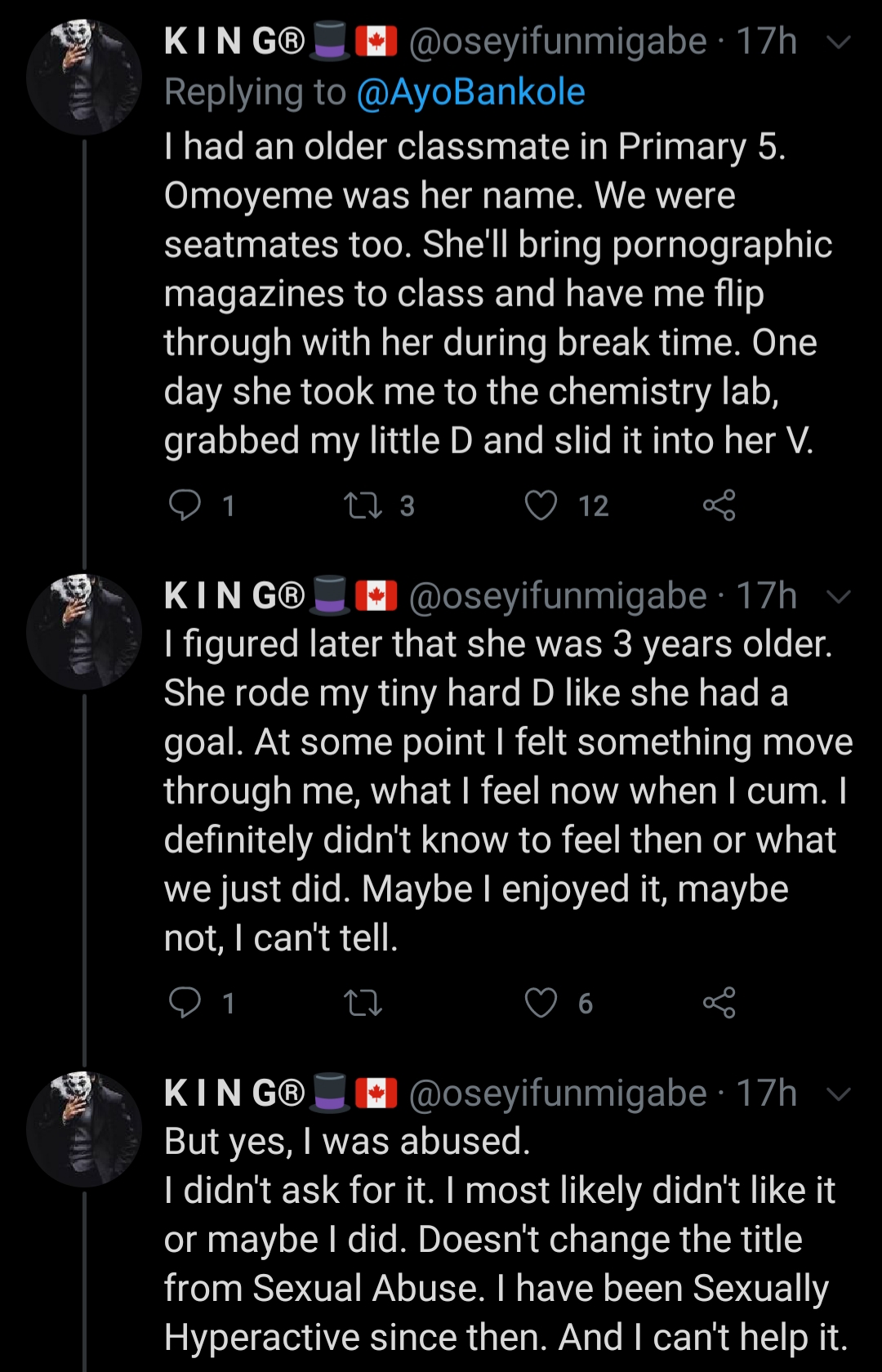 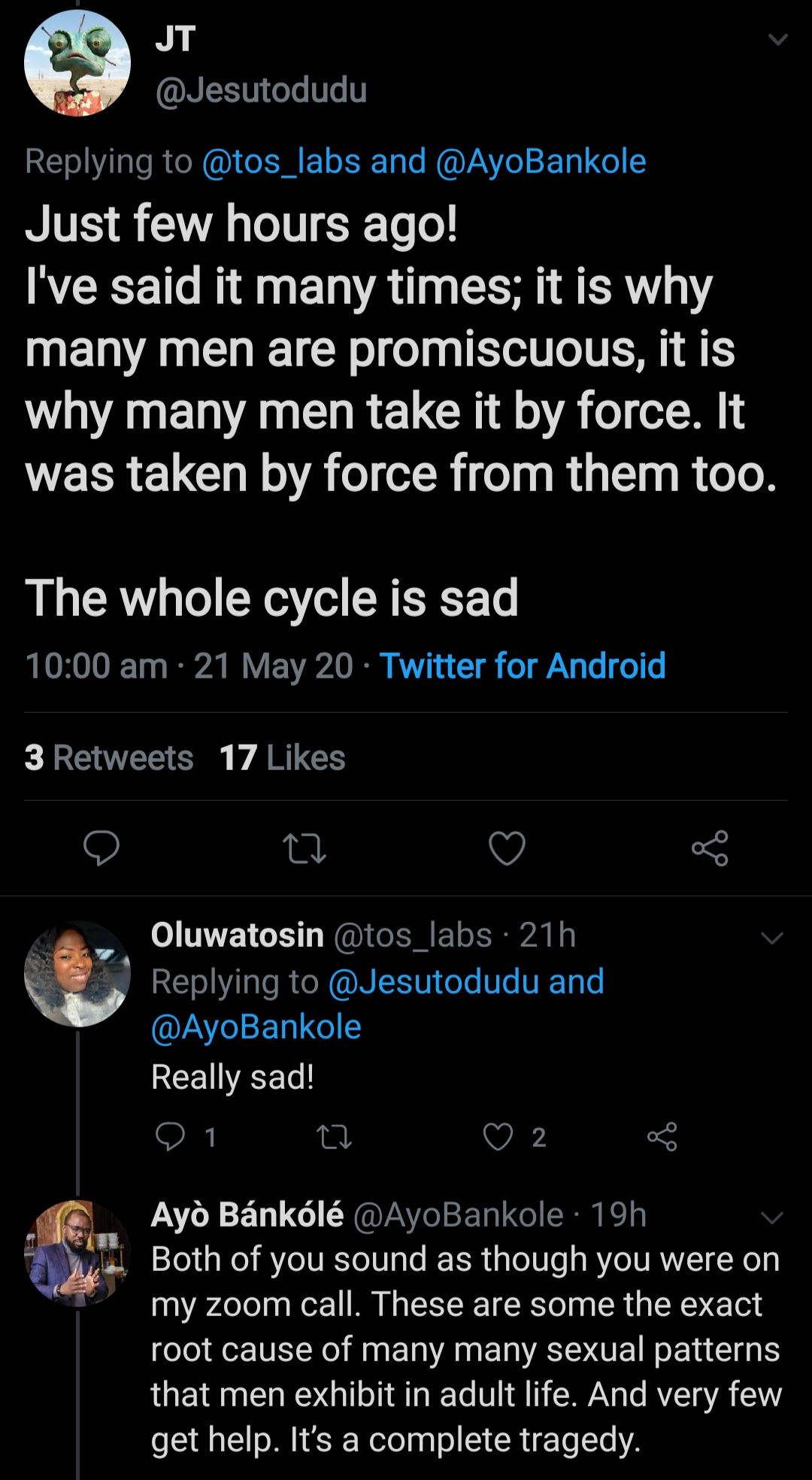 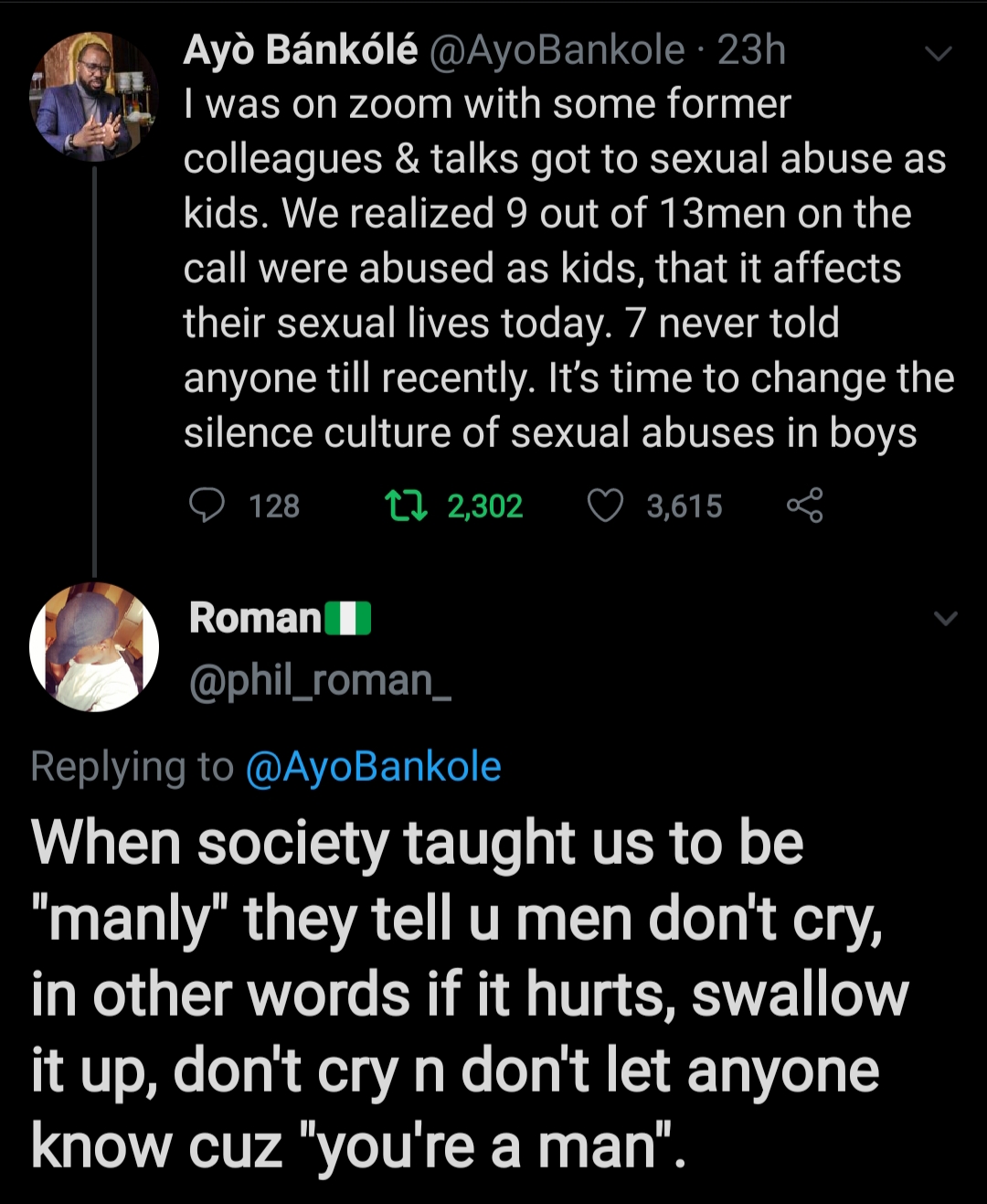 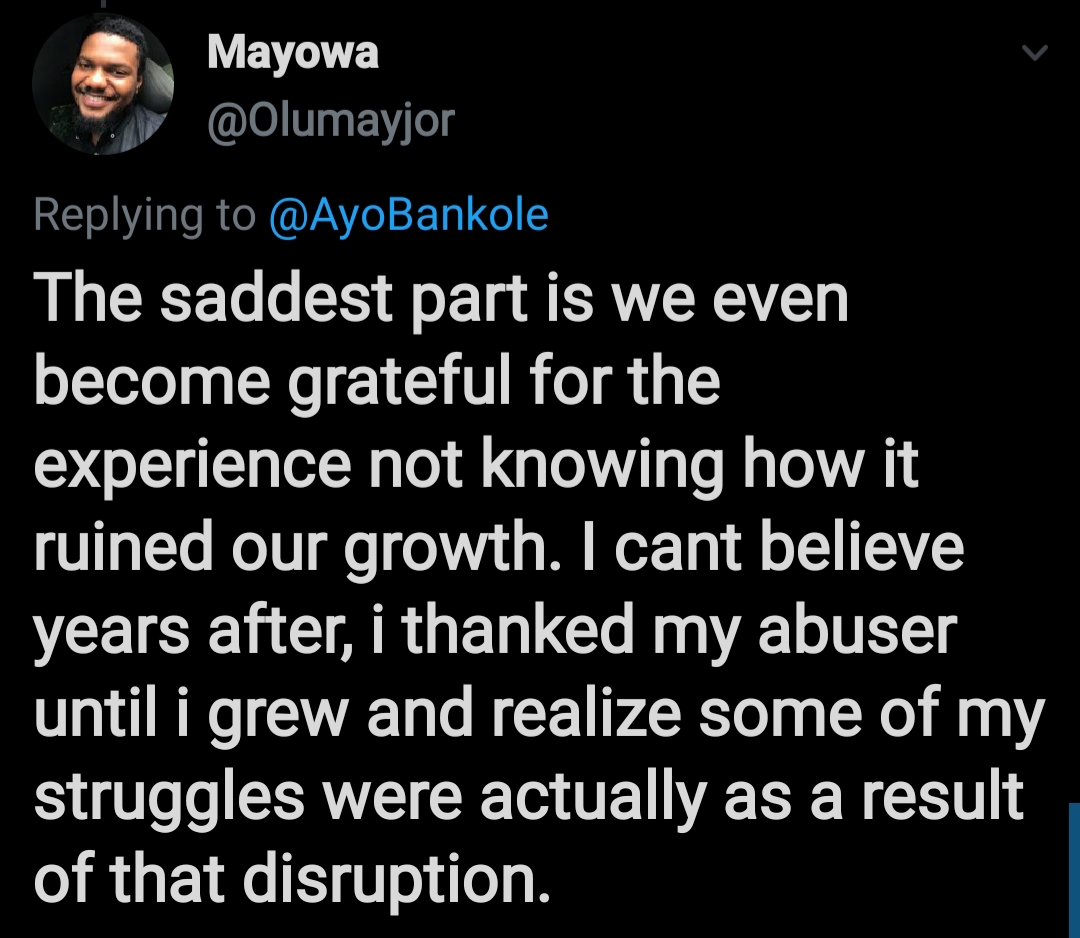 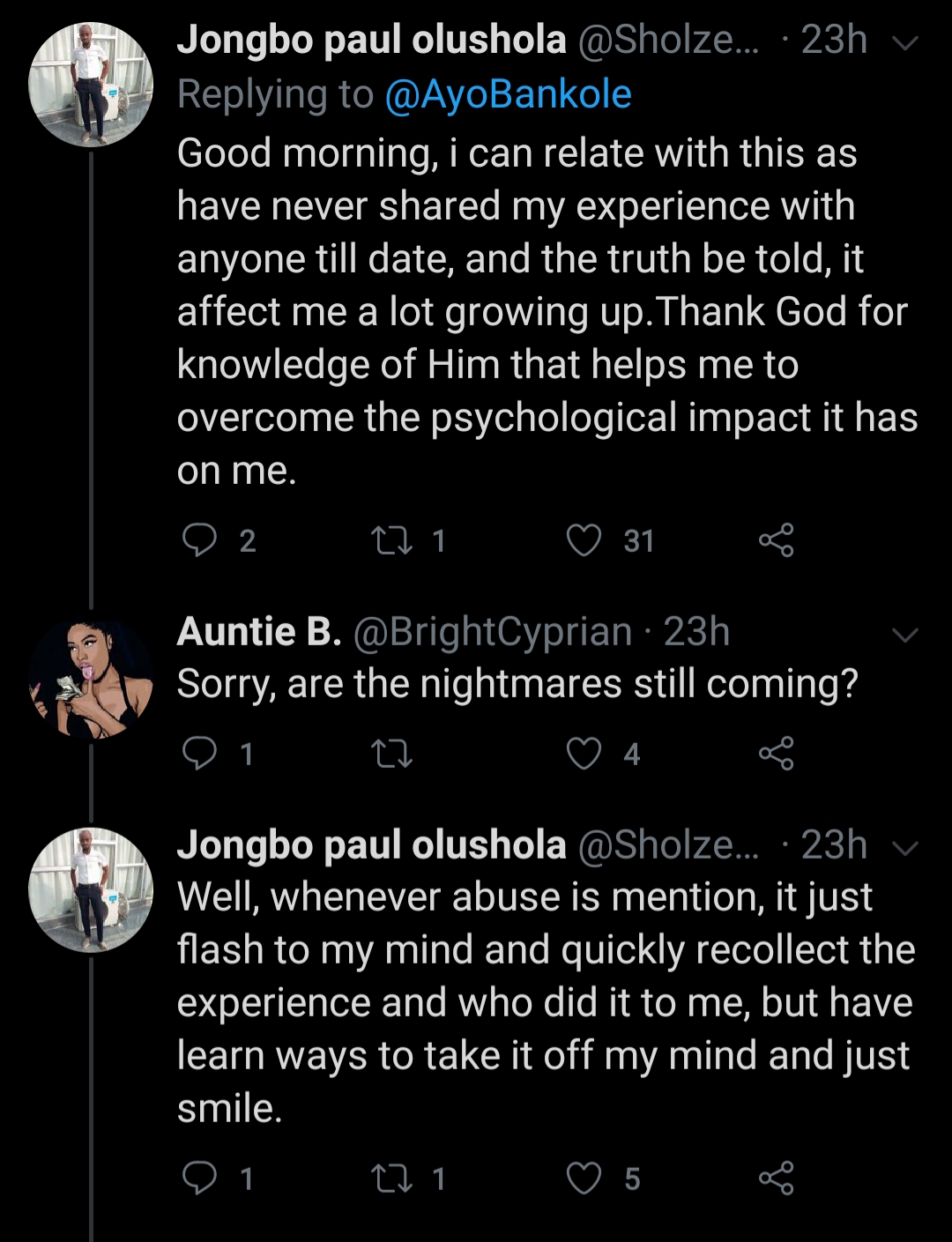 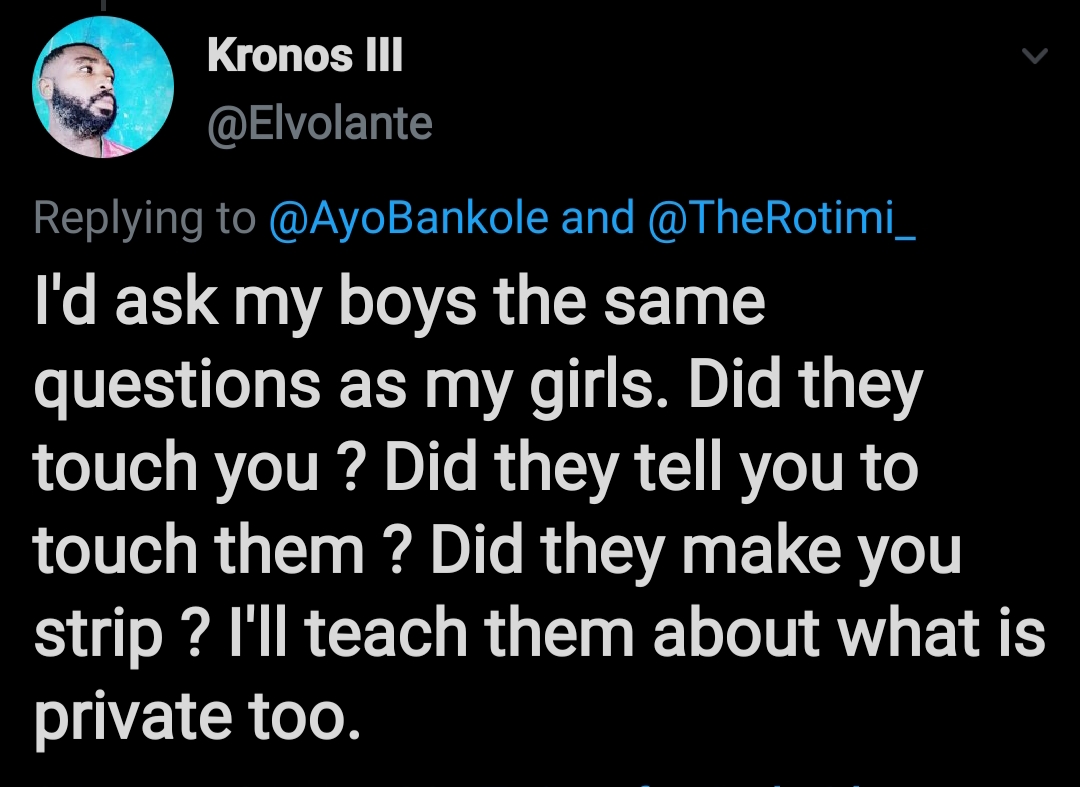 The boy child needs to be protected from socio-cultural and economic vices; and just like when women are the victims of sexual assault, we have to be more intentional about male sexual abuse.

We cannot find a solution to this problem if we keep denying its existence. “Men cannot be raped” is a myth that many people have held on to for so long. The belief that a boy who was raped by an older woman/girl should count himself lucky needs to be killed.

To end the culture of silence surrounding male sexual abuse, we have to first admit that men can be raped. After this, we have to encourage more boys to speak about their sexual abuse and believe them when they talk. 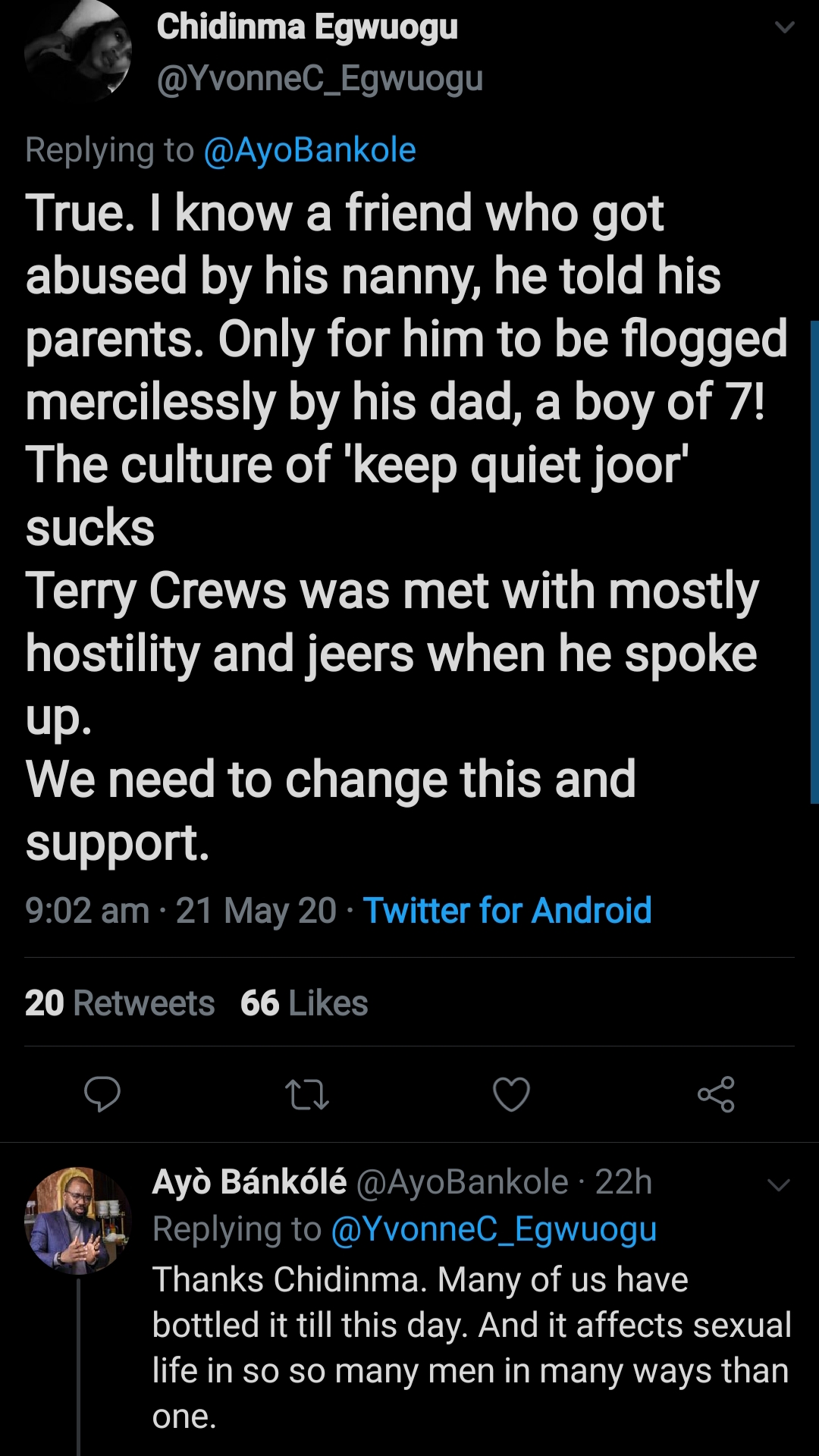 Many parents fail to teach their children sex education. For many boys, especially teenagers going into the university, the only sex education they got from their parents was several packs of condom and a few words of caution, “we know you’ll ‘do’ all those university girls, just be careful and don’t impregnate any girl”.

From an early age, boys need to be taught that there are many pedophiles lurking around and they can come in many shapes and forms, as family or friends, as neighbours or strangers, as male or female – anyone can be a potential abuser until proven otherwise.

Teach your boys to report if anyone touches them in inappropriate places or if anyone forces them to carry out inappropriate acts. And most importantly, believe them when they talk.

We have many boys who sexually abuse women because they do not understand what consent is. That is because the option of a ‘yes’ or ‘no’ had been taken away from them on many occasions. As a parents or guardian, you should teach your boys that no one has the right to touch them if they don’t  consent to it – even as adults. As you teach boys to respect boundaries when it comes to a woman’s body, they should also be taught to demand respect in return. Their boundaries should never be crossed because they are boys.

A boy-child cannot figure out life on his own. That he’s a boy does not mean that he can take care if himself. The culture of “settle yourself na, no be man you be?” has to stop! Fathers need to step up and be very active in raising their sons and teaching them. Boys need more men to share their experiences, so they can learn from them.

Justice Starts With The Constitution

According to the Nigerian constitution, boys and men cannot be raped.

“The criminal code defines rape as any sexual intercourse with anyone without his or her consent or incorrectly obtained consent. Under this act, the slightest act of activity without the ‘yes’ of the other partner equals rape. It, however, does not recognize any other form of sexual activity, so any penetration of the anus or mouth is not considered rape under the Nigerian law.

The offence of rape under this act is also gender-specific; only men commit the offence and by implication, only a woman can be raped. Also, according to Section 30 of that act, a male person under the age of 12 years is presumed to be incapable of having carnal knowledge. This means that he cannot be guilty of the offence even if it is proven that he has reached puberty despite his age.”

In 2019, Senator Oluremi Tinubu pushed for a bill seeking to remove gender restrictions on rape cases. The bill, which has passed a second reading, will formally recognise men as victims of rape when it’s finally passed.

Without the backing of the constitution, perpetrators of male sexual abuse and rape cannot be prosecuted and the victims cannot get justice.

Nigeria is one of the 10 worst countries for children to live in. A better welfare system for kids includes proper safety measures for them. Systems like child-hawking and Almajiri exposes kids – especially boys – to all forms of sexual assault. Children need to be taken off the streets, protected and provided for.

A Man is Raped? Don’t Laugh!

It is terrible that a lot of people see male sexual assault as so inconsequential that when a victim comes out to share his experience, especially on social media, people go into spasms of laughter. What exactly is funny?

Rape and sexual assault should never be joked with, used as a meme or as a skit. No one should laugh when victims of sexual abuse tell their stories.

We all need to do better in ridding our world of all forms of sexual violence against every human.