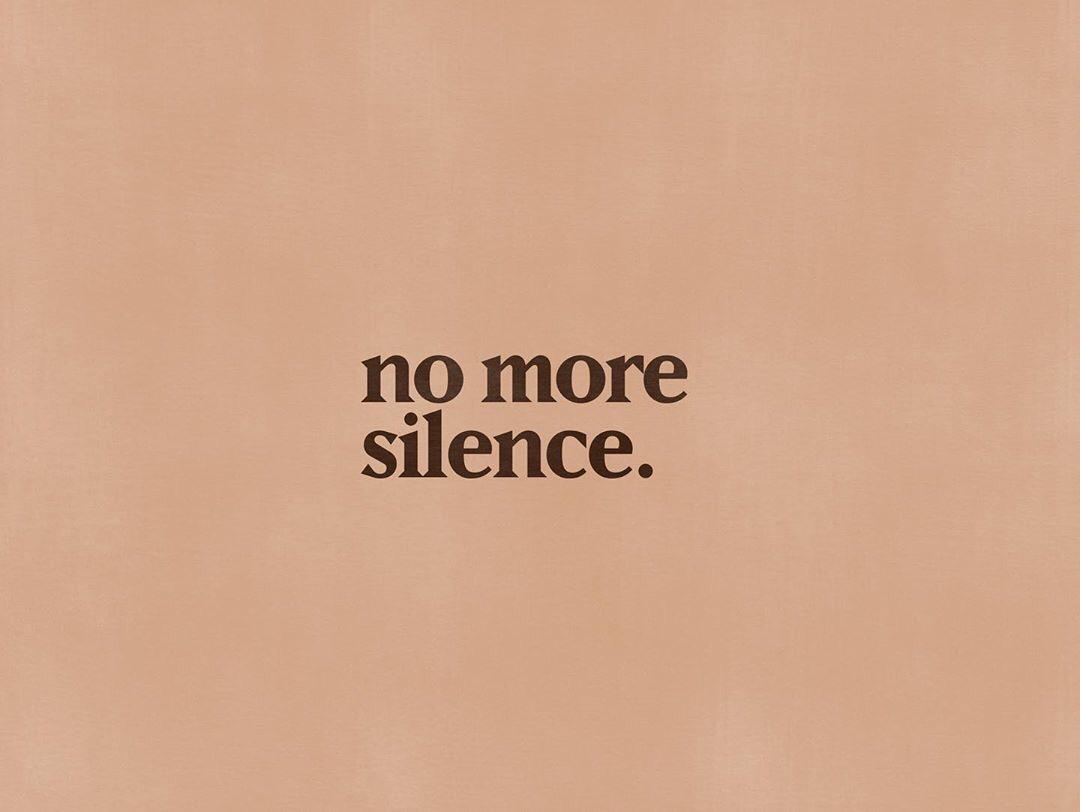 The greatest atrocity in the history of mankind is the trans-Atlantic slave trade; the barbarity with which Africans were kidnapped from Africa and shipped across the Atlantic to the European countries, the excruciating pain and labour they were subjected to and the dehumanization of black people is so far the most horrendous act ever committed to mankind.

The Scourge of Racism and Racial Discrimination

The most basic right of a human is the right to life and the greatest threat to this right for black people, all over the world, is racism! Through the years, black people have been subjugated and maligned by a system that has refused to acknowledge them as equal humans to their white counterparts and has refused to recognize their rights.

The United States of America has a population of over 42 million black people. Even with this, the United States has proved to be a highly terrible and toxic country for black people to live in. Over the years, racism against black people in the USA has steadily been on the rise. Many black people have been humiliated, profiled as criminals, falsely accused and jailed for crimes they did not commit and brutally murdered on the streets by citizens and policemen.

Racism has crept into every cranny of the American system and has been ‘effectively’ weaponized by racists – both at the top and bottom level. Sometimes, it is subtle – like white people making blackface, cultural misappropriation, a white person screaming the N-word, or throwing a banana as a black person walks by. Other times, it is tumultuous and belligerent – like shooting a black man as he jogs, policemen profiling black people and tagging them as criminals because they look like one, or four policemen kneeling on the back and neck of one black man and crushing him to death as he screams “I can’t breathe”.

On 22 November 2014, Tamir Rice, a 12-year old African-American boy, was shot in Cleveland, Ohio by Timothy Loehmann, a 26-year-old police officer. The murderer, Timothy, was later cleared of all wrongdoing and was hired by the Ohio Police Department.

In 2015, a 25-year-old black man, Freddie Gray, was arrested by the Baltimore Police Department and subsequently charged for possessing a knife. He died while being taken to prison with many injuries to his spinal cord. All the witness accounts of Gray’s arrests were dismissed and Freddie Gray’s killers walked free.

If there is one thing that is common in all these deaths – and many more not mentioned – it is that the killers were white and were never prosecuted. Justice was never served.

It is 2020 and we are still having the same issues:

In February, Ahmaud Arbery, an unarmed, 25-year-old black man, was shot to death while jogging in a neighborhood outside Brunswick, Georgia, after being pursued by two white men in a pickup truck. It took a lot of public outcry and protests before the killers of Ahmaud were arrested.

On Monday, the 25th of May, Amy Cooper was filmed calling 911 to report a birdwatcher for ‘threatening her life’ when he asked her to leash her dog in Central Park. The iconic aspect of the whole video was when she warned the birdwatcher and said: “I’m going to call the cops and say an African American man is threatening my life.” Amy Cooper played the race card because she was absolutely sure that the mention of an ‘African-American’ will trigger a violent reaction from the cops and land this African-American in trouble because her lies will be believed. If not for the video, the bird-watcher – Christian Cooper – would have probably been cooling off his heels in jail or worse, he’d have ended up dead.

Will George Floyd’s Death be the Last Straw?

For the umpteenth time, black people in America have gone into the streets to protest the death of George Floyd, a black American man who was killed by policemen in Minneapolis. Four policemen pinned him down by kneeling on him – three on his back and one policeman knelt on his neck and choked him with his knee. During that period, George Floyd kept screaming “I can’t breathe”. These were the same words screamed by Eric Garner, an African-American man who was murdered by white policemen.

Following the death of George Floyd, protesters took to the streets across America to demand justice and reiterate the fact that black lives matter.

Celebrities of African descent have also joined the fight in demanding justice and are calling out a racist system that exploits black people and then later turns on them, kills them, and discards them like a piece of rag. John Boyega took to his Twitter page to condemn racism and racists. 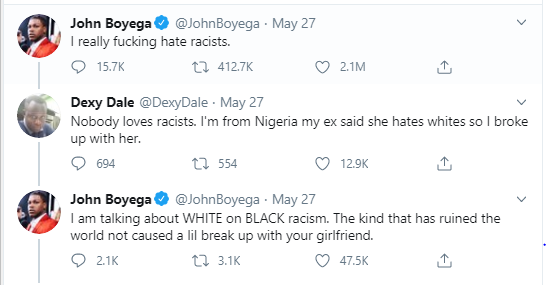 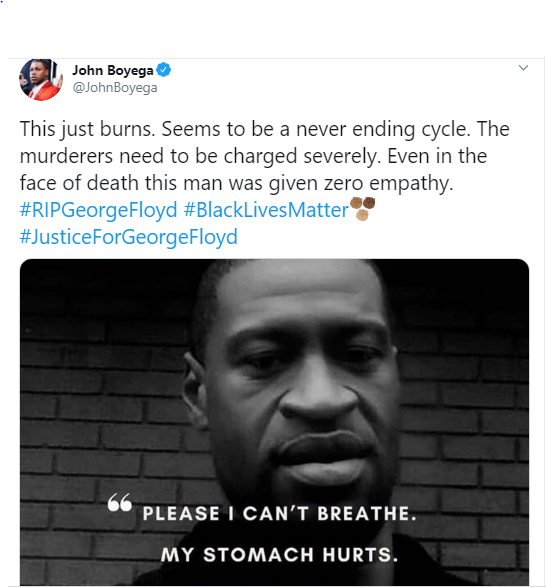 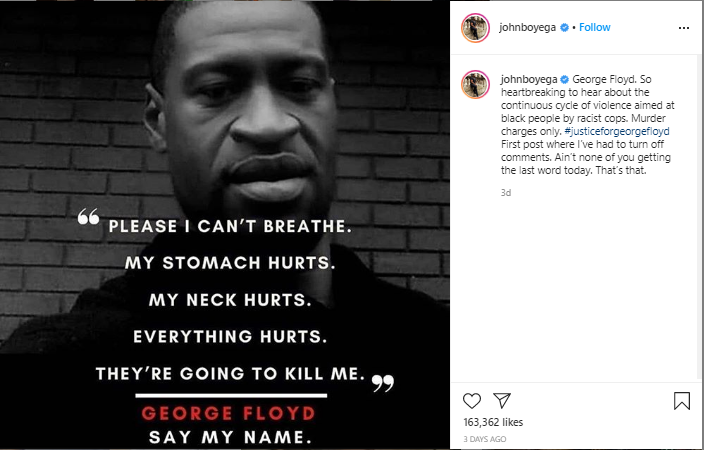 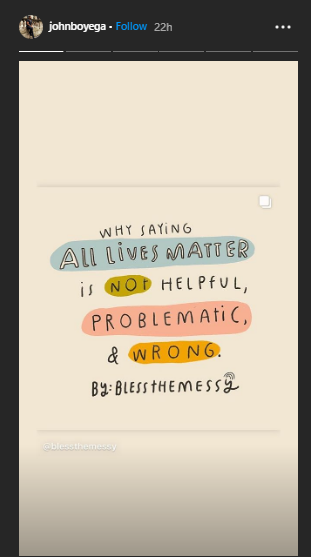 Lupita Nyong’o also demanded justice for George Floyd and gave tips on how white people can consciously stop being racist. 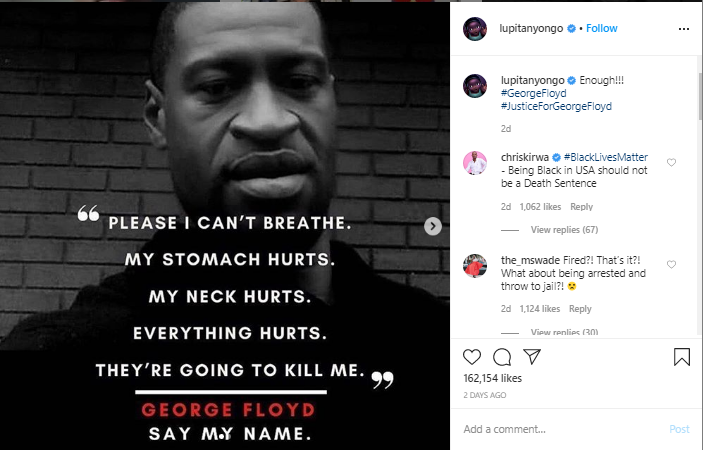 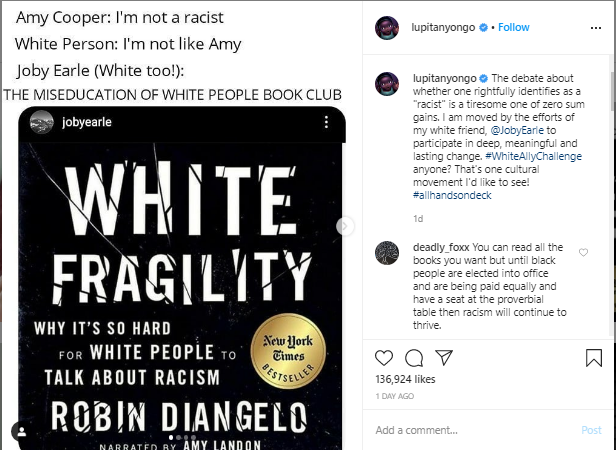 Yvonne Orji schooled people on racism and why the protest against racism is very necessary. 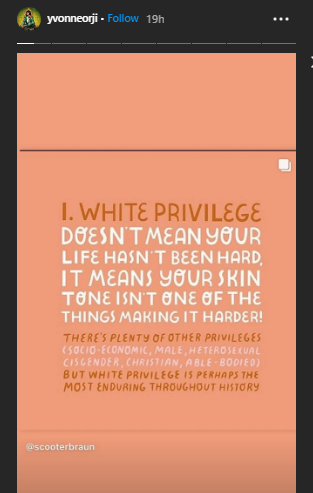 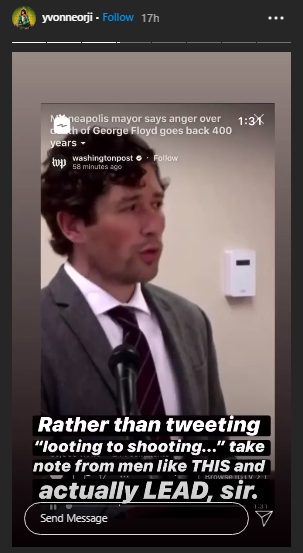 Why Should Africans Join This Fight Against Racism?

This is the story of many black people. Because of internalized and systematic racial biases, the black skin has become a threat to average white people. White policemen leverage this to gun down black people. Shop-owners monitor black people because they are racist enough to believe that a black man is automatically a thief. While some people may be comfortable enough to swim in the river of racism, black people must never stop fighting against it.

Africa has a fast-rising number of emigrants and the current population of African immigrants to the United States is about 2.1 million. It is important to fight against being treated as a piece of rag, being denied opportunities, or being subjugated because of your skin colour.

“A riot is the language of the unheard.” Martin Luther King Jr.

There is a very easy way to stop black people from rioting: give them justice, treat them equally, stop killing them. Reform the American system, share power, resources, and wealth equally. Don’t just arrest the cops – and anyone – who kills black people, ensure that they face justice and are duly punished. This will send a message to other people who derive joy in ending the lives of black people.

What’s the hope for African-Americans?

That racism does not affect you in Nigeria or Senegal does not mean you should support racism or be neutral and nonchalant about it. There is also no sitting on the fence. If you find yourself saying “but black people also need to be careful”, you are simply a racist-apologist. If you say “racism is not so bad”, you are like the proverbial son who points at his father’s house scornfully. Our black ancestors did not fight for freedom with their blood and lives for us to end up bound by the chains of racism.

The world is small and it is a global village, if we don’t put out this fire very soon, it’ll burn our homes too. A bear that dances in your neighbor’s house might soon dance in yours. You could travel for a conference, or go visit your friend, or go do a quick job and lose your life just because you’re black. We all need to condemn racism, in all it’s subtleness and aggressiveness, in all its shapes, colours and sizes.

Whether you are in Nigeria, Rwanda, Ghana, Algeria, Egypt, Sudan or anywhere else, Africans need to join the fight against racism. In 1999, it was Amadou Diallo. In February 2020, it was Ahmaud Arbery. Last week, it was George Floyd.

Tomorrow, it could be you.