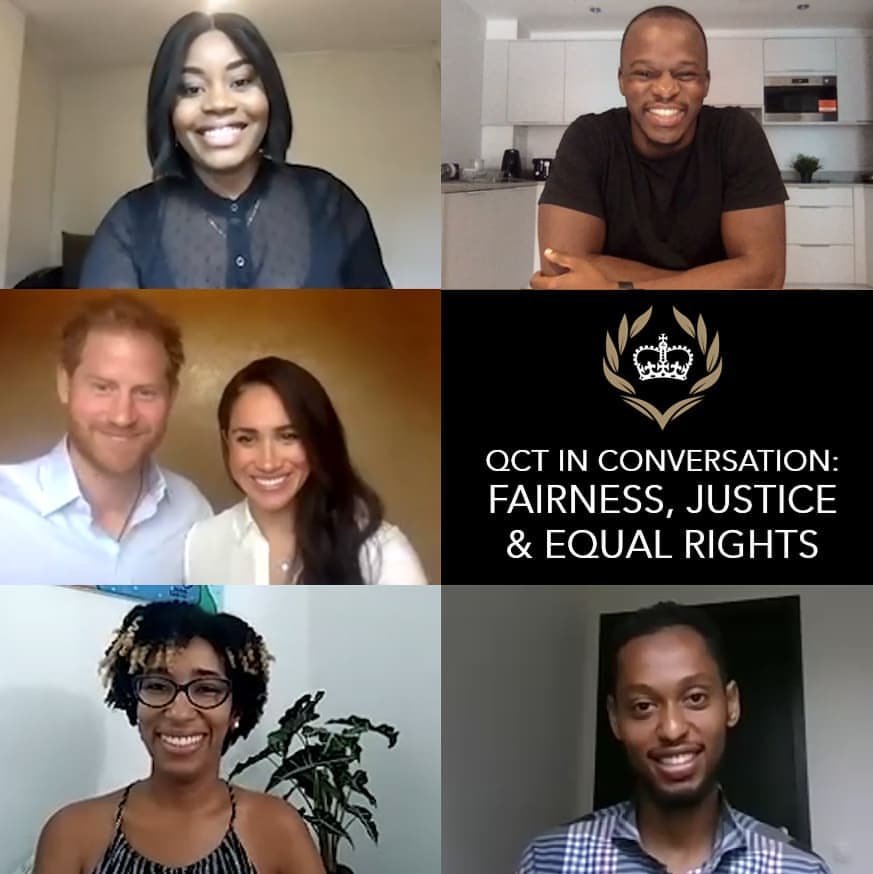 The Duke and Duchess of Sussex, Meghan Markle and Harry appeared together to talk to young leaders from the Queen’s Commonwealth Trust.

The leaders on the call included Mike Omoniyi, founder of The Common Sense Network, Chrisann Jarrett, the founder of Let Us Learn, Alicia Wallace, director of Equality Bahamas, and Abdullahi Alim, who leads the World Economic Forum’s Global Shapers.

The couple how are still president and vice-president of the Queen’s Commonwealth Trust, delivered a powerful speech about racism.

Harry pointed out that the Commonwealth needs to follow others who have “acknowledged the past” and are “trying to right their wrongs”.

So many people have done such an incredible job of acknowledging the past and trying to right those wrongs, but I think we all acknowledge there is so much more still to do. It’s not going to be easy and in some cases it’s not going to be comfortable, but it needs to be done, because, guess what? Everybody benefits.

We can’t deny or ignore the fact that all of us have been educated to see the world differently. However, once you start to realize that there is that bias there, then you need to acknowledge it, you need to do the work to become more aware… so that you can help stand up for something that is so wrong and should not be acceptable in our society today.

While Meghan spoke about equality, saying things need to be “uncomfortable” for there to be progress:

We’re going to have to be a little uncomfortable right now because it’s only in pushing through that discomfort that we get to the other side of this and find the place where a high tide raises all ships.

Equality does not put anyone on the back foot, it puts us all on the same footing – which is a fundamental human right and that’s what we’re talking about here.

It’s in the quiet moments where racism and unconscious bias lies and hides and thrives. It’s those nuances that make it confusing for a lot of people to understand the role that they play in that either passively or actively but I think even more so passively…in people’s complacency, they’re complicit.

Watch the full video below:

Last week, I was one of 3 people invited by @queens_commonwealth_trust to have a 40 minute conversation with Prince Harry and Meghan Markle (@sussexroyal) about Justice, Fairness and Equality. It was a powerful conversation which I think has global significance, especially in the time we are currently in. I think everyone should watch it. I spoke to Prince Harry and everyone other white person about performative allyship. I said, 'After pressing send online, people need to roll up their sleeves and do the work… There’s a whole host of things that it means to be an ally but the impetus has to be humility, kindness and a willingness to learn new things.’ I could not have imagined that 2 years after founding @tcsnetwork, a network built on bringing people out of their echo chambers so they can learn, we would have the opportunity to speak on such a stage, to the world about our mission. There is still work to do, but this is a nice time to look at how far we have come! Full video in the bio. _______ #fairness #togtherness #black #africa #blackisbeautiful #justice #race #equality #blackgirlsrock #blackmen #blackwoman#melaninpoppin #jesus #blackart #blackqueen #blackbusines #supportblackbusiness #naturalhair #blackpeople #princeharry #qct