Why Are We Not Talking About the Abducted Kaduna School Children? 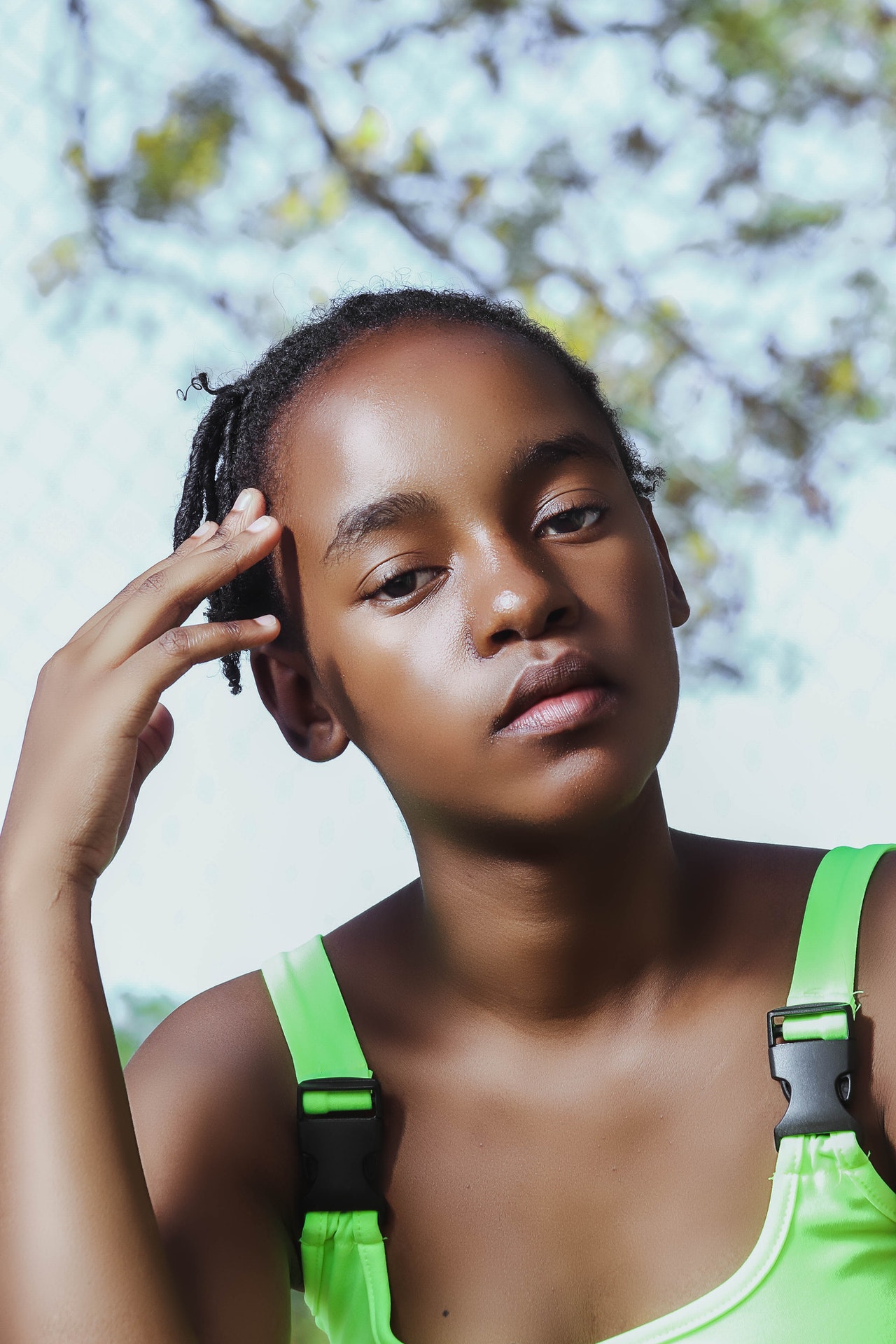 One thing that is getting increasingly common is the desensitization of many Nigerians to the anomalies happening in the country. We seem to have gotten to a point where we do not care what happens to the country or the people in it. There is an emotional disconnection between Nigerians and Nigeria, a morbid distrust for the government, and a disinterest in the affairs of the state.

It has gotten to that stage where we do not care what happens in or to the country, even when final year students of Prince Academy in Damba-Kasaya community in Chikun LGA, Kaduna were bundled away by gunmen on the 24th of August.

Why was there no buzz?

So far, Nigerians have made good use of social media to voice out their grievances, kick against unfavourable government policies, speak up against injustices, proffer solutions to societal problems, and raise help for many underprivileged people. Nigerians are known to use their voices when terrible policies are made, this is reflected in the suspension of the social media bill and the RUGA settlement project. They are known to use their voices when government officials err, like in the case of Senator Elisha Abbo. They are known to request for justice using hashtags, like in the case of the call for justice for Uwa, Tina, Jennifer, and others.

It is, thus, shocking that when these JSS 3 school children were abducted as they prepared for their exams, very few people raised an eye brow, there were no hashtags to demand for their release and the news seem to fade as soon as it was reported. There was no press conference made, no acknowledgment by government officials, no statement from the president, and no word from the governor of Kaduna state. One would begin to wonder if the lives of people, especially Nigerian children, have been relegated to nothing. Or if the lives of Nigerians have become so cheap that gunmen can easily bundle human beings away, like sheep, and the world will move on like nothing has happened.

In 2014, at least 276 girls were taken from a government secondary school in Chibok town by Boko Haram. This abduction was the start of many abductions to come. 6 years after and over 100 of these girls are yet to be rescued. In February 2018, over 100 girls were kidnapped from a secondary school in Dapchi, Yobe state. Although they have been released, Leah Sharibu, who was not released for allegedly refusing to convert to Islam, is still being held captive. This is 2020 and we are still having this same issue of abduction and kidnappings. In fact, kidnapping has become a lucrative business for bandit, gunmen, and criminals.

In all of Africa, Nigeria has the highest rate of kidnaps for ransom of both locals and foreigners.

“According to the United Nations, armed banditry impacts commerce and daily life in devastating ways, as goods, lives and properties are often lost in the process. One of Nigeria’s most important commercial thoroughfares, the Abuja-Kaduna highway, has become the breeding ground for the scourge of abduction for money.”

Nigerians have raised these issues several times on social media. There have been many tweets about the spate of kidnapping on our highways and many people have been scared to embark on inter-state travels. 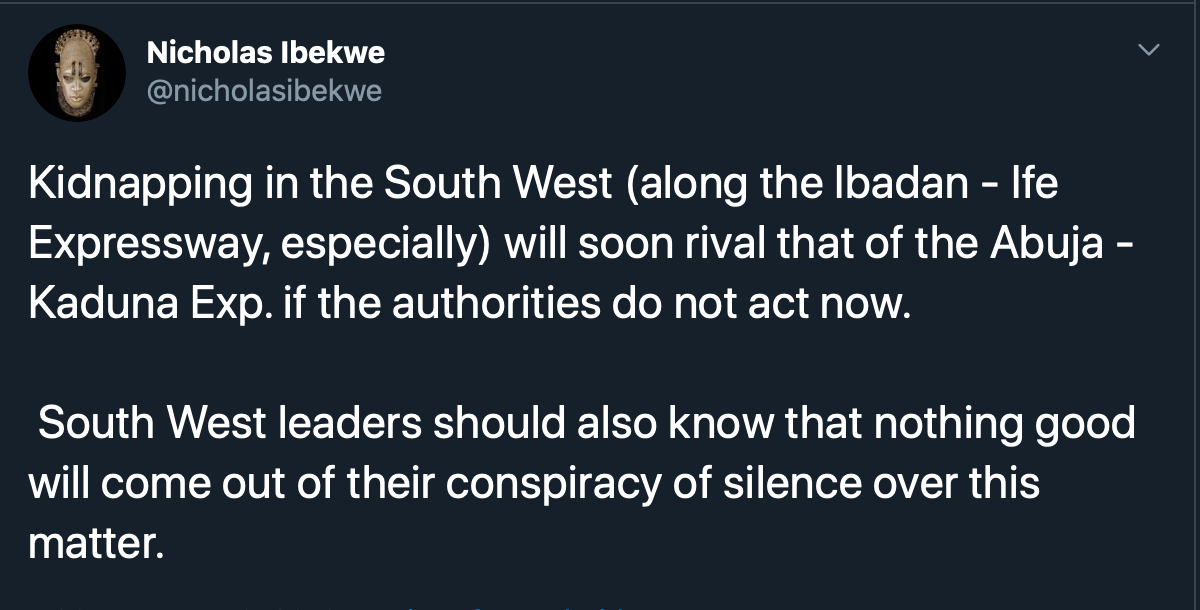 Through the years, abductions and kidnappings have become common, unfortunately, there seems to be no tangible action taken by the government to curb this. Worse still, many Nigerians are beginning to treat the news of people being abducted and forced to pay a huge ransom as normal.

Still, we need to realise that closing our mouths, unlooking the many evils happening in our society, desensitizing ourselves to the happenings of the country, and being nonchalant towards public policies will not solve the problem. We need to speak up. Today. Tomorrow. Everyday.

You cannot afford to keep quiet, appropriate blame or become tribalistic in the face of injustice. Shebi it is you people that voted Buhari. E no concern me as long as e no reach my side, make them just dey kidnap deirsef. All these Northen people sef, nawa.

Guy, forget, one day e fit reach ya side.

Everything that happens in Nigeria, whether in the East, North, South, or West, concerns you. You cannot afford to remain oblivious to the sufferings of other people because, according to you, it doesn’t affect you. Today, they are kidnapping students in their schools, if care is not taken and this is not curbed, kidnappers will be bold enough to knock on doors and kidnap people – right in their homes.

Yes, you are tired. But you need to remember that just like you, the innocent people who were kidnapped are human beings who had dreams and plans before the abduction. The Chibok girls in custody, Leah Sharibu, and this newly abducted school children had dreams and hope before they were carted away. Before you politicize this issue, remember that these school children did not vote for Buhari. Before you make it a tribal issue, remember that they did not choose to be born as Northerners. We do not determine our tribe or ethnicity. Children have the right to be safe in their country and it is unfortunate that they have found themselves in a country where human lives have been made cheap.

This is not a Southern or Northern problem. This is a Nigerian problem. We need to speak up against abduction and kidnapping in Nigeria. Failure to do this means we can all, one day, be bundled away and the world would move on as though nothing grave happened.

Peter Molokwu: Protect Your Mental Health At All Cost