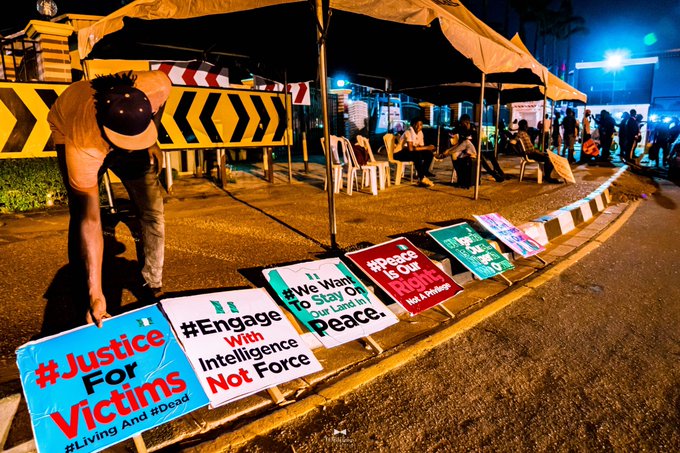 You probably already know that Nigerians showed up en masse to the streets on Thursday, October 8, to protest the extrajudicial killings and assault by the Special Anti-Robbery Squad (SARS).

Celebrities like Runtown, Falz, Tiwa Savage, WurlD, DJ Spinall, together with Nigerians from all works of life showed up and demonstrated at the protests, demanding that the killings and assault stop.

What you probably didn’t know is that people stayed up all night at the Lagos State Government secretariat in Alausa, intent on having the government do something about the wanton abuse.

Here’s what been going on while we slept:

Twitter user @SavvyRinu who had previously shared that the governor’s Chief of Staff had assured the protection of protesters, around 9 PM, then shared that the police, led by the state’s commissioner of police Hakeem Odumosu, was towing away the vehicles of protesters and carting tents away too.

With the tents and canopies and chairs carted away, Nigerians stayed put, demanding that their voices be heard.

While protesters, including comedian Mr Macaroni, stayed put overnight, others were home working to secure their comfort, too.

Twitter user and food vendor @Mosopemi shared that she had a plan to prepare breakfast for 50 people. Quickly podcaster FK Abudu got to work raising funds, and, so far, over ₦500,000 has been raised, covering the breakfast and snacks for protesters.

People from different industries are also reaching out across their network, encouraging everyone to go out and join the protests. The abuse affects us all, they are saying.

Nigerians are also reaching out to international celebrities and media houses, hoping that their influence can force the government to make change. Cardi B, who has been mentioned by several Nigerians, replied to a tweet saying she would do her research.

And Lagos isn’t only where today’s protests are taking place. There are protests in Ibadan and Abuja. Nigerians everywhere are standing up for their rights.

See tweets about all that’s going on with the #EndSARS protests.

The @PoliceNG led by CP Odumosu just towed away our cars and are trying to dislodge us!

Start tweeting! If we die tonight, we died for a worthless nation! https://t.co/HKPj2JKkac

The Speaker, Mr Ajayi Obasa finally came out to address the protesters and PETITION was signed!!!!! pic.twitter.com/uSUF5C4nLc

On this tweet, we were surrounded by almost 50 policemen with guns pointed at us with nowhere to go in the middle of the night in the cold for speaking for a purpose that concerns us all and the only thing that was proffered is “stay safe”.
Some even said “go home”
Omo..e go be https://t.co/xcgir8h1KD

Obasa was live saying our tents will be returned.

They brought like 6-7 army trucks/vans loaded with security.
Like say we be criminals..
This country! ??#EndSARSImmediately pic.twitter.com/XBhPY1Fn14

This is a whole DPO in Lagos.

Even while we were being harassed? Smirks! Because she heard she trended on the media today.
Posterity will never be kind to you! https://t.co/q9aEM3nGtL

Let it be known that our tents and chairs weren't returned this midnight.. But we won't relent

Live at the State House, We got a gen to charge our phones to give updates on the Peaceful protest.

5:30am
While some were able to catch some sleeep, others stayed awake till now because of lack of tents, chairs and other camping equipments taking away by d CP of Police last night

We are not tired.

Its morning!!! Some of us didn't get to close our eyes. We rise this morning again! Join in where ever you are and let your voices be heard too!#EndPoliceBrutality #EndSARSProtest #EndSARS pic.twitter.com/66pAOXmHRq

It’s 5.45am and our ever loving father figure @mrmacaronii hasn’t closed his eyes in the cold out here. Omo, ?

WE DON'T NEED ANY MORE MONEY FOR NOW??? Will continue to update in the morning! https://t.co/STSQu4cJTR

I'm overwhelmed! I can't imagine what the soldiers out there @ Alausa feel! I thought to make something light then take to them as breakfast by myself but so many people have shown support.This is huge! Thank you all! Well done @fkabudu @Olufisiayo & @I_Am_Ilemona #EndSARS

The heroes!!! Some of them you might or might not even know! But they have stayed up all night to send a message to the world! I hope the message is loud and clear!!!!
We still dey!!! ALUTA CONTINUA ?? pic.twitter.com/GV6bJ4cmpq

If you’re in Ibadan, join us at the protest point today at Eleyele on or before 9am.

Please note, we are going to run a peaceful protest and these people will provoke our patience so they could cock their guns.

Do not allow them trigger or provoke you!! #EndSarsProtests

WE ARE SHUTTING DOWN AIRPORT ROAD!!!. #EndSARSProtest

What’s going ? Can you give me a summary so I can research later ….you know I love Nigeria ?? https://t.co/jHKFS3M1K2

Young Nigerians are Taking a Stand with the #EndSARS Protests