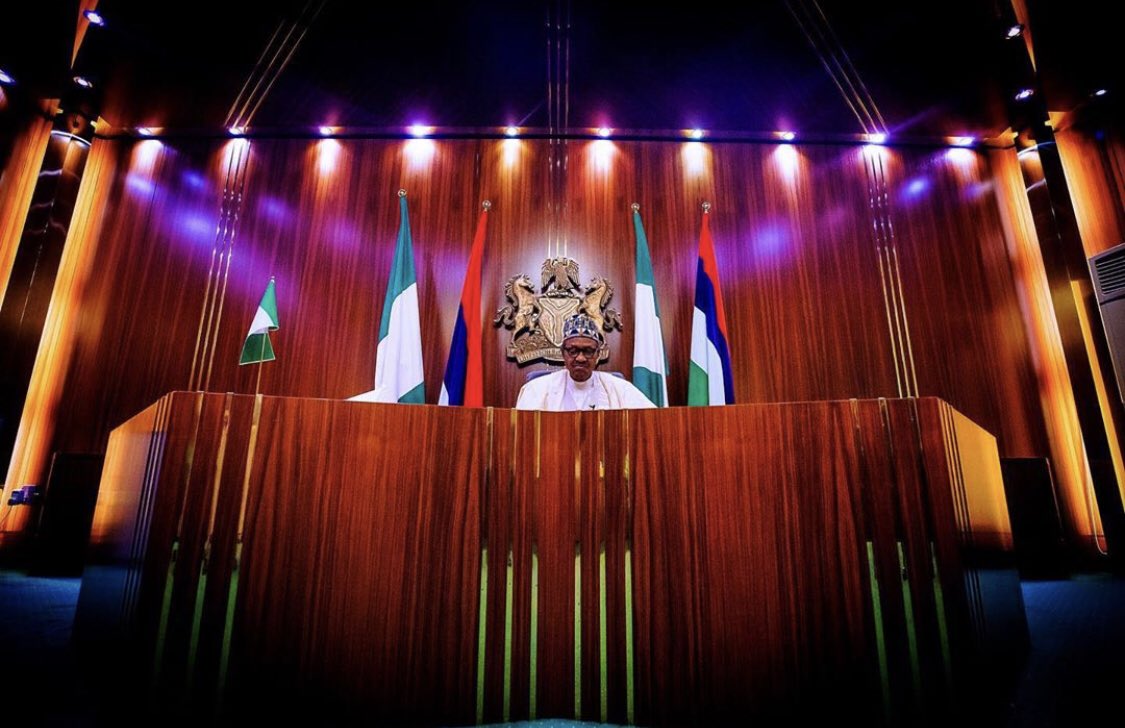 President Muhammadu Buhari has spoken up for the first time since the Lekki toll shooting of the #EndSARS protesters by security operatives on Tuesday.

The president revealed during his presidential address on Thursday, stating that it has become necessary to address Nigerians having concluded a meeting with all the Security Chiefs.

He said the government has accepted the demands of the #EndSARS protesters, the nation and the government is respecting the rights of its citizens, while pointing out that he has scrapped Special Anti-Robbery Squad (SARS).

During his statement, no mention on the Lekki toll gate shooting was made, nor sympathizing with families and friends who lost their loved ones during the unrest across the country. He paid tribute to officers of the Nigeria Police Force who have “tragically lost their lives in the line of duty”.

There’s more: The president ordered the discontinuation of street protests while calling on the youths to constructively engage government in finding solutions. Appealing to protesters to note and take advantage of the various well-thought-out initiatives, such as:

designed to make lives better and more meaningful and “resist the temptation of being used by some subversive elements to cause chaos with the aim of truncating our nascent democracy”.

He also stated that the international community should check the facts before rushing to conclusions.

It has become necessary for me to address you having heard from many concerned Nigerians and having concluded a meeting with all the Security Chiefs.

I must warn those who have hijacked and misdirected the initial, genuine and well-intended protest of some of our youths in parts of the country, against the excesses of some members of the now-disbanded Special Anti-Robbery Squad (SARS).

On Monday 12th October, I acknowledged the genuine concerns and agitations of members of the public regarding the excessive use of force by some members of SARS.

The choice to demonstrate peacefully is a fundamental right of citizens as enshrined in Section 40 of our Constitution and other enactments, but this right to protest also imposes on the demonstrators the responsibility to respect the rights of other citizens, and the necessity to operate within the law.

As a democratic government, we listened to, and carefully evaluated the five-point demands of the protesters. And, having accepted them, we immediately scrapped SARS, and put measures in place to address the other demands of our youth.

On approving the termination of SARS I already made it clear that it was in line with our commitment to the implementation of extensive Police reforms.

Sadly, the promptness with which we have acted seemed to have been misconstrued as a sign of weakness and twisted by some for their selfish unpatriotic interests.

The result of this is clear to all observers: human lives have been lost; acts of sexual violence have been reported; two major correctional facilities were attacked and convicts freed; public and private properties completely destroyed or vandalised;
Muhammadu Buhari the sanctity of the Palace of a peace-maker, the Oba of Lagos has been violated. So-called protesters have invaded an International Airport and in the process disrupted the travel plans of fellow Nigerians and our visitors.

All these executed in the name of the ENDSARS protests. I am indeed deeply pained that innocent lives have been lost. These tragedies are uncalled for and unnecessary.

Certainly, there is no way whatsoever to connect these bad acts to legitimate expression of grievance of the youth of our country.

The spreading of deliberate falsehood and misinformation through the social media in particular, that this government is oblivious to the pains and plight of its citizens, is a ploy to mislead the unwary within and outside Nigeria into unfair judgement and disruptive behaviour.

On the contrary, both our deeds and words have shown how committed this administration has been to the well being and welfare of citizens, even with the steadily dwindling revenues, and the added responsibilities and restrictions due to the Coronavirus pandemic.

Government has put in place measures and initiatives principally targeted at youths, women and the most vulnerable groups in our society. These included our broad plan to lift 100 million Nigerians out of poverty in the next 10 years; the creation of N75 billion National Youth Investment Fund to provide opportunities for the youths, and the Micro, Small and Medium Enterprises (MSME) Survival Fund, through which government is:
a. paying 3-months salaries of the staff of 100,000 micro, small- and medium- enterprises
b. paying for the registration of 250,000 businesses at the Corporate Affairs Commission
c. giving a grant of N30,000 to 100,000 artisans
d. guaranteeing market for the products of traders

These are in addition to many other initiatives such as:

No Nigerian government in the past has methodically and seriously approached poverty-alleviation like we have done.

With regard to the welfare of police personnel, the National Salaries, Income and Wages Commission has been directed to expedite action on the finalization of the new salary structure of members of the Nigeria Police Force.

The emoluments of other paramilitary services are also being reviewed upwards.

In order to underscore the importance of education in preparing youths for the future, this administration has come up with a new salary structure and other incentives for our teachers.

Let me at this point reaffirm the Federal Government’s commitment to preserving the unity of this country. We will continue to improve good governance and our democratic process, including through sustained engagement. We shall continue to ensure that liberty and freedom, as well as the fundamental rights of all citizens, are protected.

But remember that government also has the obligation to protect lives and properties, as well as the right of citizens to go about their daily businesses freely and protected from acts of violence.

To our neighbours in particular, and members of the international community, many of whom have expressed concern about the ongoing development in Nigeria, we thank you and urge you all to seek to know all the facts available before taking a position or rushing to judgement and making hasty pronouncements.

In the circumstances, I would like to appeal to protesters to note and take advantage of the various well-thought-out initiatives of this administration designed to make their lives better and more meaningful and resist the temptation of being used by some subversive elements to cause chaos with the aim of truncating our nascent democracy.

For you to do otherwise will amount to undermining national security and the law and order situation. Under no circumstances will this be tolerated.

I, therefore, call on our youths to discontinue the street protests and constructively engage government in finding solutions.

Your voice has been heard loud and clear and we are responding. And I call on all Nigerians to go about their normal businesses and enjoin security agencies to protect the lives and properties of all law-abiding citizens without doing harm to those they are meant to protect.

Let me pay tribute to officers of the Nigeria Police Force who have tragically lost their lives in the line of duty. I would like to thank those State Governors, traditional and religious leaders who have appealed for calm and restraint.

I also thank youth leaders who have restrained their followers from taking the law into their hands.

This government respects and will continue to respect all the democratic rights and civil liberties of the people, but it will not allow anybody or groups to disrupt the peace of our nation.

Thank you all. God bless the Federal Republic of Nigeria.