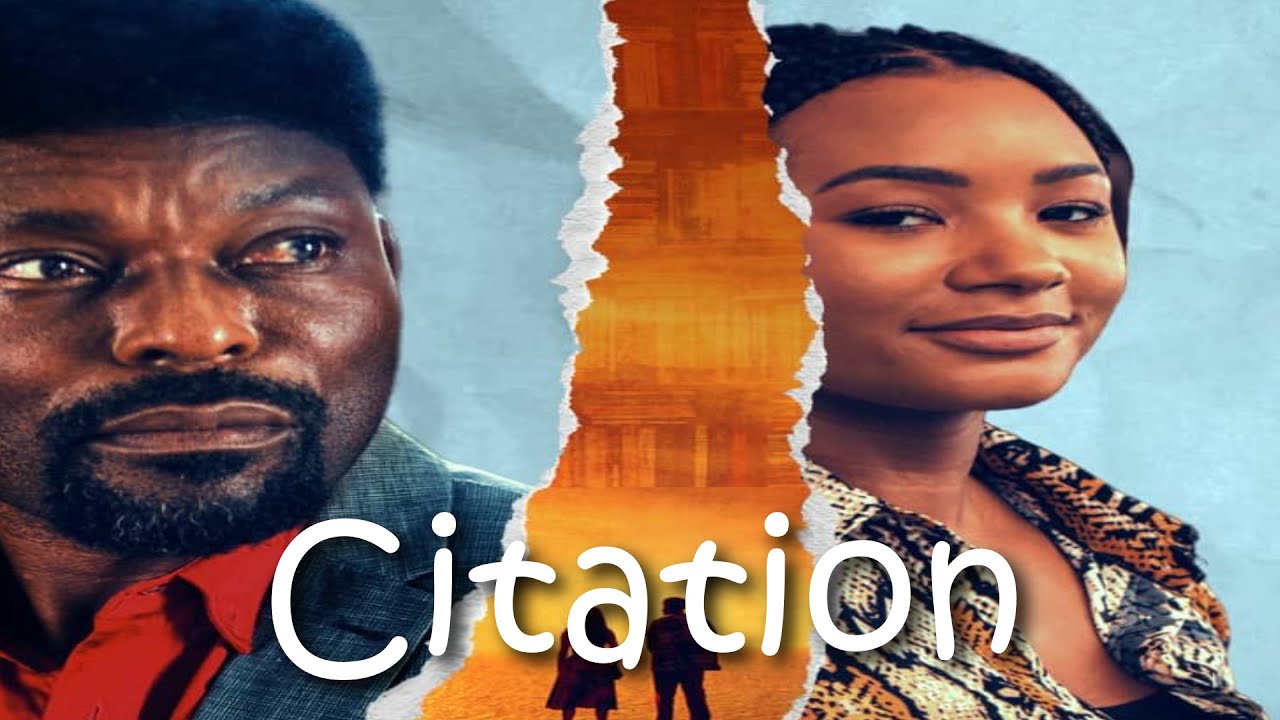 The last time I wrote about Kunle Afolayan’s movies, I lamented his decline from the heady days of The Figurine to the rather piss-poor Tribunal. I am happy to report some good news: his new film, Citation, is an improvement on Tribunal and even Mokalik. The bad news is that Citation does not come close to The Figurine.

In the new film, Moremi, a postgrad student, and Professor N’Dyare, her lecturer, offer differing accounts of a sexual incident at their school’s senate hearing. It’s the classic ‘he says, she says.’ Well, except that Afolayan, working with Tunde Babalola’s script and using flashbacks, tells how they arrive at the university’s senate hearing entirely from Moremi’s point of view.

This, of course, takes out some suspense from the proceedings. The viewer is entirely reliant on the filmmaker’s supposedly objective point of view, but that point of view is skewered from the start.

This could be a political choice, as in today’s climate, we are required to “believe women.” In Citation, that requirement is presented as “dramatize a woman’s account only.” As with the real world, the danger here is the tendency to ignore a plausible ambiguity. That might not be a bad notion in real life, but in the movies, it is fatal. Ambiguity enriches narratives.

It is the viewer’s luck that the character the dramatization tries to demonize is played by Jimmy Jean-Louis. He injects charm into the highly decorated academic, N’Dyare, and makes you believe there’s a chance that his nemesis might be wrong about what transpired between man and student. Clearly, the film is riding on the problem of sexual harassment as exhumed and placed in the mainstream media by the famous BBC documentary on sexual abuse in Nigerian universities. The politics and the more dramatized female point of view are the same. With the BBC documentary, the audience knew the investigative reporter was playing a character. The same is true of newcomer Temi Otedola, who never lets us forget she’s acting, and not very well, too.

The choice of a newcomer in a role as big as this is puzzling. Scene after scene, Otedola doesn’t dispel the feeling that she shouldn’t be carrying such weight this early in a career she might be considering. She has a good scene walking with Jean-Louis at a beach and a decent one flirting with her boyfriend Koyejo (Gabriel Afolayan) in a narrow walkway, but mostly one is aware she is not Moremi.

Not that she is helped by the screenplay, which, for some reason, never really shows Koyejo and Moremi do anything other than hold hands. They never kiss, which is a surprise because Moremi appears to be a studious but worldly postgraduate student: she has been to places, speaks French, and doesn’t appear to have a religious hang-up. She does have a sheen of innocence, but as anyone who has been in a university knows, looks have no real bearing on the sexual behaviour of young people. As a result of this unlikely chasteness, one never really believes she has anything romantic truly going on with the supposed boyfriend. And as Moremi is in almost every scene, to watch Citation is to watch Otedola not quite succeed at being Moremi.

Even if the film doesn’t feature Moremi so much, at 2 hours, it is about an hour too long. This should hardly be a problem – Kemi Adetiba’s King of Boys was long – but usually this means pacing is handled quite well. That isn’t the case here, and I kept thinking that Afolayan is seeking semi-art-house reverence for a film with much less political and philosophic heft than the average art-house film. In any case, such films hardly feature a scene like one in Citation in which there’s a hollow attempt at creating riveting dialogue.

In the scene, the chair of the senate hearing (Ibukun Awosika as herself) is required to slam-dunk N’Dyare to give one of those climactic moments destined to live forever on YouTube or social media. Awosika summons the authority someone used to given orders in real life can, but the words put in her mouth by Babalola’s script is a hollow one: Awosika claims to have been nominated for the Nobel Prize but that is not possible because the Swedish Academy has a 50-year secrecy rule – any year’s list of nominees is only made public half a century after it is created. So if Awosika wasn’t nominated as a teenager, how does she know of her nomination? And even if she doesn’t know of this rule, how can a Sorbonne-trained academic like N’Dyare not know?

A hole of this sort destroys the goodwill a knowledgeable viewer might have towards the film. It feels like the cinematic equivalent of coming back with an American accent when you’ve only traveled to Lome for three nights. At best, it’s unnecessary, at worst, it’s ignorant.

Fortunately, the cinematography by South Africa’s Jonathan Kovel is impressive and is the very best thing about Citation. Kovel is, of course, no slouch. He was the man behind the camera for the award-winning Of Good Report directed by his maverick countryman Jahmil X.T Qubeka. Incidentally, that film also examined an improper teacher-student affair.

In working with Afolayan, Kovel follows Yinka Edward, another talented cinematographer. Whatever might be said about Afolayan, it has been clear for years that he possesses a knack for selecting cinematographers. It is one of the conundrums of modern Nollywood that that level of care hasn’t quite permeated all parts of Afolayan’s filmmaking, especially in his more recent films. Since October 1, there have been these small things that undermine scenes, dialogue, the script, and eventually the film.

But it is not all bad. Citation is watchable and should be seen. In being a better film than Afolayan’s recent output, it gives us hope that it is entirely possible that Afolayan might be back and is heading up, up, up to the heady days of Figurine.