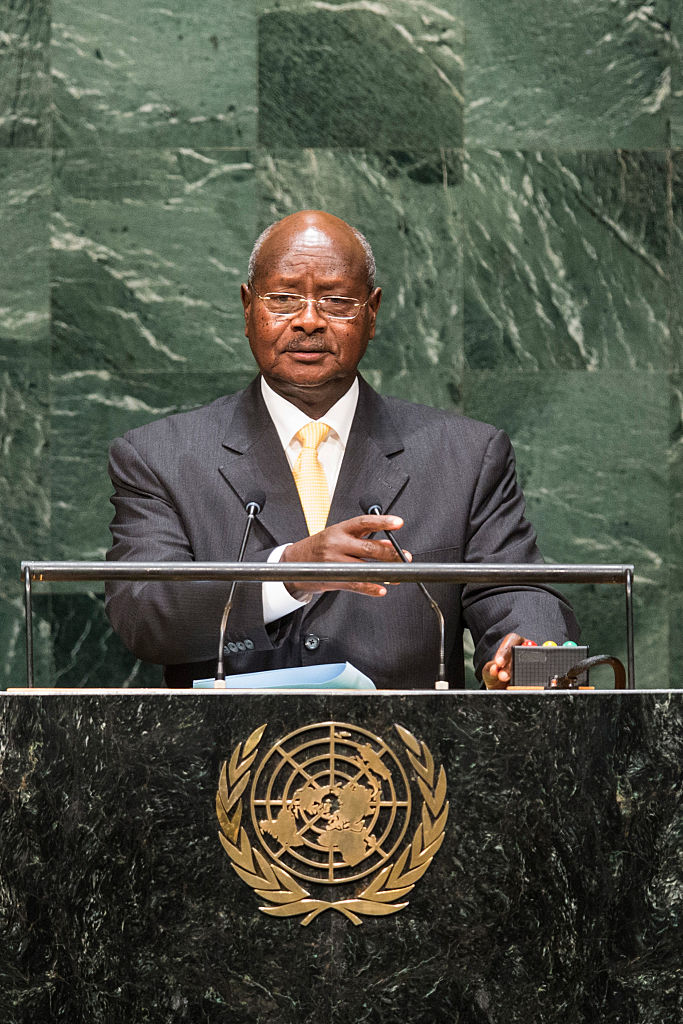 NEW YORK, NY – SEPTEMBER 24: President of Uganda Yoweri Museveni speaks at the 69th United Nations General Assembly at United Nations Headquarters on September 24, 2014 in New York City. The annual event brings political leaders from around the globe together to report on issues meet and look for solutions. This year’s General Assembly has highlighted the problem of global warming and how countries need to strive to reduce greenhouse gas emissions. (Photo by Andrew Burton/Getty Images)

“What’s the purpose of liberation when we can’t have a peaceful transition, freedom fighters become dictators” – Robert Kyagulanyi Ssentamu, AKA Bobi Wine.

When you ruminate over these words, you will realise how powerful they are in relation to the current situation in Uganda.

The 76-year-old Ugandan president, Yoweri Museveni, has been in power since 1986. After overthrowing Idi Amin, Museveni promised to rule for only four years, then hand over power to a civilian-led government. He said the people of Uganda and Africans were entitled to democratic governance and he asked Ugandans “not to put him in the category of those who are power-hungry.”

Today, President Museveni does not only fall into the category of the power-hungry people he condemned, he also seems ready to clamp down on anyone or anything that threatens his political ambition. He has, on several occasions, amended the Ugandan constitution to enable him to remain in power for over 30 years now. Tomorrow, he will be contesting, alongside other presidential candidates, for the 6th time in a row.

Unwilling to relinquish power, President Museveni has unleashed the Ugandan police force against his major opposition, 38-year-old Bobi Wine, barely 24 hours to the presidential election. This isn’t uncommon, for years, President Museveni has historically clamped down on anyone who poses a threat to his political power. In 2018, Bobi Wine was reportedly arrested and beaten so badly that he had to travel to the United States of America for treatment. In December 2020, the arrest of two presidential candidates sparked a nationwide protest that led to the death of tens of people. In a press conference, Bobi Wine said the military had killed his driver, his home was raided, his gardeners were taken away and one of his security guards was badly beaten.

We have a crisis of dictatorship in Africa. The treatment that my friend @HEBobiwine has received along with other opposition politicians in Uganda is appalling.

Listening to his address today I was just troubled about the state of African affairs. pic.twitter.com/x62Ho9Yiq8

Several videos and photos on social media also show someone – who people say is Bobi Wine’s wife – being beaten, and Ugandans being brutalised by armed security men.

This is what is happening in Uganda elections campaign. People are only allowed to campaign for Yoweri Museveni. If military find you campaigning for Bobi Wine they do this to you. Other African leaders are taking notes, stop it now or suffer tommorow. #WeAreRemovingADictator pic.twitter.com/bLoJYHLUkj

What is President Museveni Afraid of?

In a series of events that have rocked the world in the past weeks, we have seen how world leaders, in a desperate bid to cling to power and remain in political seats, use violence as a tool. Just 2 weeks ago, supporters of the United State’s president, Donald Trump, stormed the Capitol in protest, with the president encouraging them by calling them ‘very special’ and telling them “we love you.”

Just like Donald Trump, many African leaders are desperate to remain in their political seats and President Museveni is no exception. Unfortunately, in Uganda, there is no system put in place to curtail this, especially since the constitution is constantly being reviewed in favour of the incumbent president.

In her interview with President Museveni, Amanpour of CNN asked him, “What are you afraid of?”

President Museveni’s regime seems to have taken a war stance against the people and it is clear that when it comes to Ugandans exercising the democratic rights that enable them to contest and be voted for, there is no level playing field. From arresting, torturing, and jailing presidential candidates to Ugandans losing their lives during campaigns, and social media being shut down in Uganda, one cannot help but wonder if President Museveni’s insistence on remaining president is because he is afraid of his political opponents or he has an unhealthy thirst to always remain the number one person in Uganda. Whatever the answer may be, the fact remains that democracy, in Uganda, is being threatened.

⚠️ Confirmed: #Uganda is now in the midst of a nation-scale internet blackout on the eve of elections; real-time network data show national connectivity falling to 33% of ordinary levels as per government order in effect from 7 pm 📉 #UgandaDecides2021

Julius Malema, in a video, said that the African Union is a “gentlemen’s club where old people protect one another.”

There's No Such a Thing like African Union~Julius Malema.

Mr Malema Hit The Nail On The Head. pic.twitter.com/2g0zGLiuIF

The BBC described the African Union (AU for short) as a pan-African organization whose goal is to propel a united continent towards peace and prosperity.

In light of the unrest that has bedevilled Uganda for years, one cannot help but wonder what, exactly, the African Union is doing to ensure that Ugandans enjoy democracy. As the people fight to reclaim their freedom and enjoy democracy, African leaders and Africans must not fold their arms and watch Ugandans fight alone. We must stand by our brothers and sisters. We must stand by the truth, fairness, and justice at all times.

Tomorrow, Uganda will start another political journey and we hope that this election will usher in a new era of peace, growth, and development. Whatever tomorrow’s outcome may be, we will always stand by the people of Uganda.