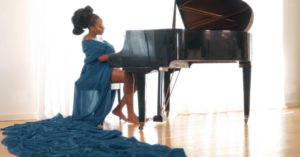 Afro-soul singer, Kaliné has released a new single titled “This Body,” which celebrates her lovely journey as a soon-to-be-mum. The single is accompanied by a music video directed by Rosanna Mailan.

On Instagram, she reveals why she released the new tune, which she sees as a love letter to her body, saying, “My pregnancy introduced me to my body. As crazy as that sounds. I never paid deep enough attention to it. But the changes I experienced on a daily basis during my pregnancy made me SEE my body a lot closer and appreciate it for what it is, what it can do, how it can evolve and morph into this incredible temple that safely incubates a whole human being.

“As I mentioned in my last couple of posts, recording vocals was the most difficult it’s ever been in my career but with the steady flow of inspiration that my changing body gave, it felt important to respond by pushing myself and trusting my voice. #ThisBody is a product of my 2nd trimester sleepless nights and numerous talks with myself in front of the mirror.”

“My Body” captures her thoughts and celebrates the most important and one-of-a-kind period of her life to date. It was the first time she met her own body. She said that she had never realized or truly comprehended the power inherent inside the feminine body. “I had never known its true capabilities. I had never know what it fully represents. I had never appreciated its beauty in such a deep way. I had never acknowledged its power.”

My evolution from one stage of my life to this next one has taught me about myself and my invincibility. I’m so excited to share this song with you that was birthed at a time when I struggled with my identity, my confidence. It has since changed me. I see myself more. I love myself more.

A Quick, Easy & Healthy Carrot Snack the Kids Will Love

Yup, You Can Get the Goddess Knotless Braids with Your 4C Hair