See the First Teaser for the Second Season of “Bridgerton” 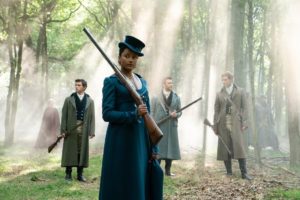 Netflix has just released a teaser trailer for the second season of “Bridgerton,” which is set to premiere on March 25th. A lot of the new season seems to be about Lord Anthony Bridgerton (Jonathan Bailey) and his love life, as well as his desire to keep the Bridgerton name by finding a good wife.

The new teaser also showed Lady Whistledown in action, with a quick glimpse of Penelope (Nicola Coughlan) writing her latest scathing update. She says that while the town wonders about who she is, she’s been ‘sharpening her knives for all of them.’

The first season was all about Daphne Bridgerton (played by Phoebe Dynevor) and her relationship with the Duke of Hastings (Regé-Jean Page). The season two cast includes Jonathan Bailey, Simone Ashley, Adjoa Andoh, Luke Thompson, Golda Rosheuvel, Claudia Jessie, and more, as shown in the one-minute teaser.

Are the Officers Ready to Show Love? Watch this Special Episode of “Visa on Arrival”