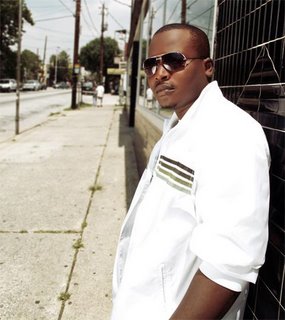 Lanre Dabiri aka Eldee the don is Nigeria’s No. 1 Producer/Rapper/Singer/Record Label Exec/Architect/Fine Boy lol….The dude has got so much talent. Eldee was introduced to us as a founding member of the Trybesmen and the head of Trybe Records….and ever since then he has been hitting us with hit song after hit song after hit song….Eldee left Nigeria for the USA some years ago and recently came back to ink a deal with Obi Asika owned Storm Records which is by far the HOTTEST music label in Nigeria right now. Eldee has a new album coming out titled “Return of the King”. I’m sure it will be FIYAH!!! Y’all should make sure u buy it.
I am pre-ordering my own autographed copy right now!
Here are some of Eldee’s hottest songs…..
African Chiquito (chi chi chilolo) – funny track…..i luv it for a special reason…guess..
Shake Bodi Rmx (by Trybesmen) – classic!

Personally, I luv Eldee’s music and the new song ‘Champion’….a friend of mine was saying it sounds a lot like a Sean Paul song…..whateva…..I think it’s hot!!! This is part of my series of features on Storm Records artists…..so watch out for more soon….By the way, Eldee held auditions for girls (models and dancers) to feature in his new video for ‘Champion’ ..it was on the 11th, 12th, 13th of August in Atlanta……Did anyone go? confess now o…lol….. I’m soooo curious!!!!!

What do y’all think of Eldee? His new song? Will u like to ‘shake bodi’ in his video …lol?

AND THE WINNER IS………