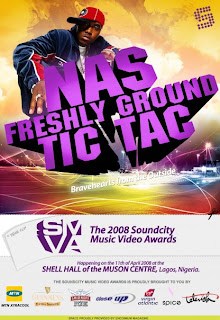 Hi Everyone!
So how was your weekend?
Mine was alright but I cant even remember most of it because it feels sooooo distant already.
Anyways, the inaugral edition of the Soundcity Video Music Awards (SMVA) took place on Friday, 11th April 2008. Here is a rundown of the event.

As seems to be the tradition with Nigerian events, the awards show started late, really late!
Anyways, the event eventually kicked off with D’Banj and Ashionye introducing themselves as the host and hostess for the night.
The first award to be presented was the Best Male Video award – the presenters were John Fashanu and Munachi Abii. There was a really funny moment here – John Fashanu asked the crowd ‘Munachi, most beautiful woman in the world, deal or no deal’ and the entire crowd shouted ‘NO DEAL!’ lol…anyways, Munachi handled it very well and laughed it off. The award for Best Male Video went to DJ Jimmy Jatt – Stylee

There were so many breaks and interludes during this show but Ashionye, D’Banj and Cool FM DJ, Freeze did a good job of keeping the atmosphere buzzing. I have to say that I was impressed by all 3 of them. They were funny and entertaining. I was really curious to see how Ashionye would hold her own as an awards host but I feel she did a good job.

The rest of the awards and performances were as follows:
Best Female Video presented by Lady Di and D1 Adeneye
Winner: Kween – Jebele …she looked really pretty and was genuinely excited.

Then the man they have been buzzing about Nas arrived on stage! The crowd went beserk! 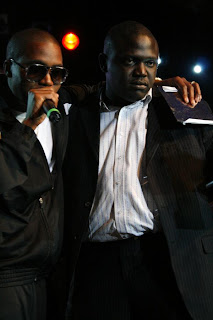 He presented the award for Best Hip Hop Video/African Video of the Year. Surprise, surprise, the nominees’ videos didnt play…it was quite embarrassing. I’m so happy for ‘Dat Ibo Boy’ Ill Bliss, he’s been on the grind for a while, nice to see him rewarded.
Winner: Ill Bliss – You Go Wound

Nas was presented with the 2008 Hip Hop Legend Award by Charlie Boy, Elajoe and Mode 9.

Nas performed a medley of hits – At this point, the crowd was crazy! everyone was on their feet, singing etc… Nas seemed really excited as well and ended the performance by promising the crowd that ‘when he moves to Nigeria, we are invited to his house to visit’…Nas are you sure? lol

Best Cinematography presented by Kenny Ogungbe
Winner: P-Square – Do Me
They brought their whole village with them to pick up the award on stage! there had to be about 20 people justling for space.

Best Video presented by Mai Atafo and Ebube Nwagbo
Winner: P-Square – Do Me

The final performance of the night was by SA Band, FreshlyGround. They were introduced by Ramsey Noah and Gbemi Olateru Olagbegi
Quite quirky. Luved it but many people had left at that point so I hope they werent discouraged!
That’s it! The show ended at about 1.40AM!!!

Overall, the awards were entertaining, great choice of performers and hosts but the logistical issues almost ruined it. D’Banj and Ashionye looked good. D’Banj wore designs by Emmy Collins. Ashionye was styled by Ifeoma Williams and wore designs by Deola Sagoe and Lanre DaSilva Ajayi. Congrats to the winners and all the best to the SoundCity crew. 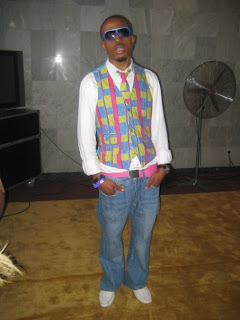