Instead of our Saturday Interviews, decided to do a Friday article
(I’m sure some of you are relieved to be spared from the achingly inappropriate interviews LOL…Dont be happy for too long, Saturday Interviews will be back 🙂
This is from the New York Times and is part of their ‘Lagos Journal’ series. I am not sure why the NYT has a Lagos Journal but its been running for over 20 years!
The article is not without its flaws, it captures only two facets of Nigerian society – the mega rich and the really poor but it articulates something worth talking about…
I love Lagos but its crazy!
Sometimes I feel like we are on an episode of ‘Gossip Girl’ or something even more perverse. I’ve met people when they first arrived/moved back to Lagos and then met up with them 2 years later and the differences are usually striking.
In many cases, the American/British accent is now more pronounced (how now?) and the attitude more haughty. I am not knocking anyone, I am an advocate of doing what works for you. I know sometimes, I need to put up a ‘wall’ to survive this city.
But seriously, Lagos is a character builder, its either you fall and keep trying to keep up with the Joneses or you become a better, more confident, more driven person and strive to make your mark for your own chunk of the pie.

LAGOS, Nigeria — The governor’s son sits hunched at the bar, contemplating his nearly empty bottle of Hennessy. On the dance floor, the airline director’s daughter sways back and forth to a hip-hop beat. Nearby, the star soccer player, just in from London, tries to squeeze past his growing circle of fans and hangers-on. In the center of the club, the oil magnate’s son gets on top of a

table and takes a swig from a bottle of Dom Pérignon. 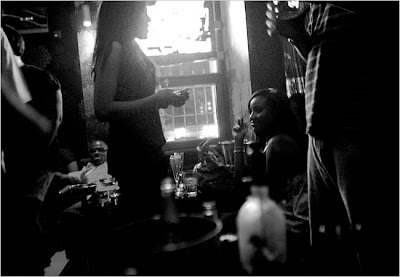 Inside one of the nightclubs in Lagos, Nigeria. 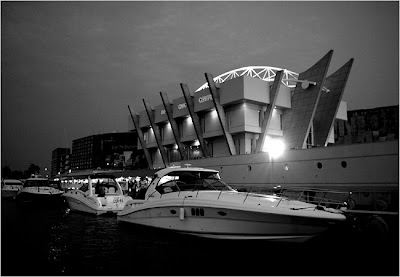 A line of yachts. 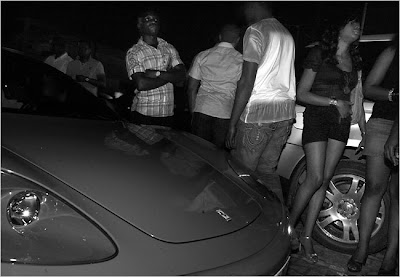 A soccer player’s Ferrari outside a club. 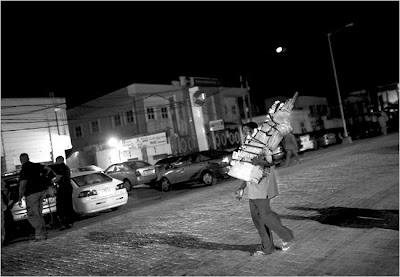 One of the boys who tried to sell chewing gum and cigarettes to departing nightclub patrons.

Just another Saturday night in Lagos, one of Africa’s money- and contrast-rich boomtowns. Already a city of superlatives on the continent (it has variously been deemed Africa’s most traffic-plagued, most populous and fastest-growing megacity), Lagos has a new title to add to its mantel: most expensive.

Lagos has always been one of the most powerful commercial hubs in West Africa, ever since slaves were first shipped from here to Europe and the Americas. But because of the rising price of oil, the declining United States dollar, the relocation of foreign workers from the oil-rich but kidnapping-prone Niger Delta, large privatization efforts and a mad dash for the city’s remaining plots of land, Lagos is more flush with cash and full of glitter than ever.

A recent study of the most expensive cities for expatriates by the consulting firm Mercer found that Lagos ranked 30th, making it only slightly less costly than New York but considerably more expensive than Los Angeles, Miami and Washington.

Even European cities like Stockholm and Barcelona, Spain, were found to be more affordable — and in Lagos the high prices are that much more eye-popping because the average Nigerian survives on less than $2 a day.

Evidence of vast amounts of money floating around the “islands” — two small pieces of land poking into the Atlantic that anchor the city’s economic activity and are home to banks, consulates and oil and telecommunications companies — is everywhere. Dinner for two at an average restaurant costs more than $200. A cocktail costs more than $15. A box of cereal costs $12 at a supermarket. Hotel rooms under $400 are difficult to find.

In the aisles of glistening new malls, expatriates and wealthy Nigerians often buy $10,000 watches and $5,000 cellphones. New BMWs, Mercedes-Benzes and Bentleys plod through grinding traffic, bumping over rocks and weaving around potholes.

Multimillion-dollar yachts speed up and down the creek separating the two islands. (The creek was recently determined to be too shallow for the biggest yachts, so a dredging project has been started to deepen the waterway.)

But high prices do not always mean high quality. The city was built to accommodate fewer than 100,000 residents, but it is now home to an estimated 14 million or more, according to the state government. So no matter what your station in life is, it is impossible to avoid the city’s traffic or its lack of reliable water and electricity. Most homes and businesses on the islands run on diesel-powered generators nearly 24 hours a day, resulting in thousands of dollars in energy bills.

Tayo Emden, 33, a British-educated Ghanaian who has lived in Lagos for five years as a director for a telecommunications company, said the costs were just too high to stay.

“After living in London with colleagues, we thought Lagos would be nice and cushy, but we’re having second thoughts,” Ms. Emden said. “You used to get a lot of bang for your buck, but that’s not the case anymore.”

Several efforts have been made to create economic hubs away from the islands to reduce traffic and lessen the burden, but none have been successful. So at least three million commuters fight their way through hours of traffic to the islands every day. Many leave before 5 a.m. to beat the traffic, and many do not return home until after 10 p.m.

Moreover, most Lagosians do not enjoy the privileges of the city’s new wealth, and perhaps no economic division cuts deeper than housing. On the islands, plots of 645 square feet sell for millions of dollars, and houses built on the plots are subdivided and rented out to wealthy Nigerians or expatriates whose companies do not bargain down.

“Living in Lagos is tough, that’s the bottom line,” said Bola Sobande, the general manager of the popular Palms shopping mall. “But Nigerians are survivors. We survive against all odds. Until something else comes up, we’ll just hang in there.”

More than 70 percent of the city’s residents live in informal housing, crammed into slums with no electricity or water, according to Felix Morka, the executive director of the Social and Economic Rights Action Center, a local economic rights group.

“Only the superrich can compete in this market,” Mr. Morka said. “Most people are looking for a small plot of land where they can build a shack, or to rent space in what are known as ‘I See You, You See Me’ buildings with no facilities at all. That’s what people can afford.

“The oil companies can afford to rent out huge complexes for all their staff,” Mr. Morka said, “so why would a landlord want to rent out to the Nigerian teacher who barely is even assured of a salary at the end of the month?”

Because of widespread corruption, the vast amounts of money coming in rarely trickle down in Nigeria. Still, more and more people stream into the city every day, drawn by the prospect of wealth absent from most of the rest of Nigeria.

“People are moving to Lagos because you can find work, you don’t need to know anybody or have anything,” said Francisco Abosede, the state minister for public planning.

Early on a Sunday morning, as the rich and famous begin to stumble out of clubs and into the hazy light, they are quickly surrounded by dozens of young boys acting as informal parking attendants or hawking chewing gum, mints and phone cards. The boys are paid little mind, but if they are lucky, a small bill may be handed to them from behind the narrow slit of a tinted window of a departing BMW.