I believe the first time I read about this story was on NaijaBlog and I just couldn’t believe what I was reading. I tried to put together an article on this topic last week but found myself breaking down. This is just so tragic and I pray that we can all work together to stamp this out. We will keep raising awareness about these causes and mobilizing efforts to make a change! God bless Mr Gary Foxcroft for his effort! I cant help but feel ashamed that with this happening in my country, someone from the outside had to come in to shed light on this. It makes me think, what am I doing with my time, what am I doing with my influence? Below, BN Cause Contributor, NK Aniebo gives us some more info on this disturbing situation.

By NK Aniebo – BN Cause Contributor 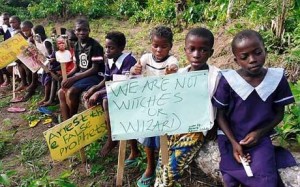 A few of you may have heard stories about the plight of child “witches” in Nigeria. I personally saw this story on the Observer last year and watched a few clips on YouTube which covered shocking stories about children being abused by their parents and family members based on the claims that they were child witches and were responsible for their parents’ unfortunate woes. It seemed that this story did not gain as much audience as it should have until it was featured again on Dispatches, Channel 4, in England.

Titled “Savings Africa’s Witch Children” – the one hour long documentary – based in Akwa Ibom state – focused on how children as young as 5 years old were branded as evil and are being abused, abandoned and even murdered. The documentary gives us graphic examples of the scars that some of these children had received from their own parents. These children were accused of killing their parents, poisoning their siblings, and for generally causing poverty in their household. The one that stuck out was a girl who had a 3 inch nail dug into her head – She had become mentally disabled. Another 5 year old girl called Mary was driven out of the house by her father. According to his pastor, she had “evil powers” which killed her mother. Mary turned out to be one of the lucky ones, as some were burnt with acid, or buried alive while the family stood by to watch them die.

This abuse has been linked to religious beliefs – a lot of pastors have formed a habit of brainwashing parents into believing one of their offspring is a “demon child”. In order for the child to be healed, religious leaders offer deliverance services, where they perform exorcism, for the price of up to N400,000. One wonders how families that live on less than a dollar a day are able to afford the costs. As part of this exorcism process, these children were locked up in a dark room in the church for weeks, starved and beaten into confession. One of the pastors called the Bishop was widely known for his ability to drive away evil spirits. He gave the children a concoction to drink called African mercury – this was a blend of pure alcohol and his own blood (I could not help but think about all the medical implications of drinking another human beings blood). Naturally, the Bishop instilled enough fear in the children to the extent that some of them began to believe that they were truly “possessed” by the devil.

Some Nigerians blame the increase on one of the country’s wealthiest and most influential evangelical preachers. Helen Ukpabio, a self-styled prophetess of the 150-branch Liberty Gospel Church, made a film, widely distributed, called End of the Wicked. It tells, in graphic detail, how children become possessed and shows them being inducted into covens, eating human flesh and bringing chaos and death to their families and communities. Mrs. Ukpabio, a mother of three, also wrote a popular book which tells parents how to identify a witch. For children under two years old, she says, the key signs of a servant of Satan are crying and screaming in the night, high fever and worsening health – symptoms that can be found among many children in an impoverished region with poor health care. When confronted about the fact that her film is an influential factor in the increase of the abuse of children in the region, she denied all allegations and accused the channel four reporter of being racist.
Stepping Stones Nigeria, a charity that works in partnership with local organisations in the Niger Delta region to build sustainable futures for some of the region’s many disadvantaged children, including protecting, saving and transforming the lives of children who have been stigmatised as being ‘witches’. So far they have been doing an excellent job with very little resources. The founder, 29-year-old Gary Foxcroft, initially went to the Niger/Delta region to research on Crude Oil but ended up staying back to devote his life to helping these desperate and vulnerable children.
So far he has rescued about 150 of them, and now struggles to care for them in a makeshift shelter and school. Stepping stones works alongside the Child Rights and Rehabilitation Network (CRARN) – together they try to persuade the parents to take their children back, with little or no success.

After the documentary was aired, about £10,000 pounds was raised instantly. However, we still have a lot of work to do together to help this cause. This does not necessarily have to be financial, as these children need clothes, books e.t.c You can get more information on how to help by joining their Facebook group

Related Topics:BN Cause
Up Next