Is It Your Money? 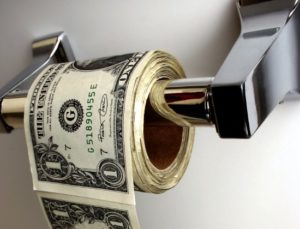 Maybe it’s just me. But ever since I wrote the ‘Gold Digger’ article people have been looking at me weird! I have been called a few names, even amongst so called friends. The most amusing of names so far has been ‘educated aristo’. I find it quite amusing actually and maybe somewhere deep inside I see it as a compliment that people take my writing seriously.

But what I have found less amusing is the reaction I have been getting from a few of the male folk. The other day, I went for a party with a couple of friends. I noticed a very HOOOT looking dude giving me the Joey (from friends), ‘how you doing look’. I returned his gesture with a polite ‘I am alright but not particularly desperate’ smile. I then nudge my friend Temi to give me the 411 on the guy. She proceeded to give me the essential statistics. Biola Brown (Fake name for obvious reasons), 36, Single, moved back from the States about 2 years ago, works as the general manager for his dad’s shipping firm. In girl language, this is the long way of saying ‘proceed the coast is clear’. But then she added something else that shocked me. “Glory, the guy is only going to play with your heart then dump you. He is from a prominent Yoruba family and his parents want him to marry from a similar background. So please be careful”. I decided against asking Temi if she thought my father was a fisher man when I saw the young man himself approach me.

“Hi, my name is Biola. Biola Brown”. He said looking straight into my eyes. “I have been looking at you since you came in here. I thought it would be only polite to talk to the prettiest girl in the room. I smiled. He was confident. I like that in a man. What’s your name? After a few short minutes we had swapped numbers and had arranged to meet up the following day.

The next day, Biola and I met up at a cosy spot on the Island and he looked even more dapper in daylight. I gave myself a well deserved pat on the back and settled into what I believed would be a good first date. I was wrong. About 30 minutes into the date, I was bored. So bored in fact that I had started making plans for the following week. Mr Biola Brown had spent the entire time talking about himself. Now don’t get me wrong, there is nothing wrong with talking about yourself. But unless you are at an interview, long winded answers about the prestigious universities you attended in America are pointless. Biola, just would not shut up about the amount of money his father had and how he felt his dad was stingy because he refused to buy him the CLK he’d asked for. He regaled me for what seemed like hours about his father’s cars, houses and illustrious appointments. Infact, at one point I started wondering if he was trying to hook me up with his dad. It really was absolutely ridiculous!

A week after our first date, my cousin’s husband who coincidentally happens to be Biola’s friend, called me, asking why I wasn’t returning Biola’s calls. I explained that I wasn’t interested in a man who spent the whole time talking about his dad. He laughed and convinced me to give the guy another chance. So off I went on yet another date with Biola, hoping that this time he had learnt his lesson. He hadn’t. This time he gave me a complete history of the Brown shipping empire. I wanted to scream. So finally I had to bite the bullet and ask, Biola do you realise you talk so much about your father’s wealth? It’s actually a bit weird. I said with a smile. His reply shocked me. “Does my father’s wealth intimidate you”?

“Errr, no it doesn’t”! I replied. I just don’t understand why a thirty something year old man is so wrapped up in his father’s wealth he is yet to achieve anything on his own. Yes, I know it was a harsh reply but I think he deserved it. Off course the date went downhill from there and he hasn’t called ever since. Frankly, I couldn’t be more pleased.

I told some of my girlfriends about Biola and apparently Lagos is riddled with these counterfeit men. Spending their father’s money like it was theirs. Meanwhile many Nigerian women are working their butts off, paying their own bills and getting slammed for it. Now, please don’t get me wrong, there is absolutely nothing wrong with receiving parental support. After all it is the pride of a father to bring up his children. However, there should come a time when the son or daughter begins to cut off the apron strings and make something for themselves. I find it quite disturbing when a man in his late thirties complains about his father’s refusal to buy him an expensive car. What ever happened to working hard and buying your own? So whether the whole of Nigeria thinks I am a gold digger or not I want to believe I speak for many women out there when I say it’s a complete turn off to meet a man that old who still collects pocket money no matter how rich his father is!

Yes, my gold digger article did mention the financial acid test, but it also mentioned the need for a man to have dollops of ambition and drive. Relying on daddy’s monthly pay check alone scores you an almighty F on that test. So here is my question to all the Biola Brown’s out there…..where is your own money?

New Video: Timaya – Who Born You

New Video: Airis – Without You