“We only live once. If we live well, once is enough” – Tosyn Bucknor

You woke up this Wednesday morning with the mother of all early morning headaches. It had nothing to do with the fact that you hit the sack at 11PM and had to be up again at 4AM to get ready for the day. It probably also had nothing to do with spending 4 hours the previous night in the infamous Lekki traffic. The headache was most likely birthed from getting home to an unpowered apartment. The noise from the neighboring generators serving as a reminder that you’d forgotten to buy fuel for your own generator in your rush to beat traffic. And then you realized only this morning that your daily pick-me-up —  your favorite brand of Brazilian Coffee, had run out.

It’s the Lekki traffic again, and every one on the road must be extra-crazy this morning. The man in the brown Camry just cut savagely in front of you just when it seemed that your lane was moving. You scream expletives furiously in an AC’d car. The headache flares.  You consider turning on the radio, hoping maybe some music will calm the pounding blacksmiths in your head. You turn the knob, and the first sound that hits your ears is:

With everything that has happened in the last 12 hours, laughter was the last thing on your mind. On any other day, you’d possibly be irritated. But for some reason, you just laugh.

You shake your head, and you laugh.

You let go of all the stress, albeit temporarily, and laugh harder. And then you wonder, how does anyone get this hyper at this time of the morning, especially in a place like Lagos.

Meet our 5th OAP in the BN On The Radio Series – Tosyn Bucknor, sometimes known as the Area Mama.

A quick recap: In the month of July, we put stories and personalities behind your favorite voices on the radio; from Toolz to Matse, Wana and Booboo. We’re picking up from there this month and making it bigger and possibly even better than the last outing.

We begin the second part with Top Radio 90.9‘s ball of zest and energy, Tosyn Bucknor.

The answer to this question: “What does Tosyn do?” will vary depending on the time of the day, where she is and exactly what she catch her doing. Any random person will tell you ‘Hey, she’s that girl on the radio.’ But really, is that it?

What most people forget, or probably do not know is that first off, she’s a writer – prose and script writing, the voice of Sickle Cell with her These Genes project and a Singer —  all these long before she became a Radio On-Air Personality

Her story began at birth (Obviously, you say? Wait for it!) She was born at the back of a cab, with very unique genes. Called sickle cell by some, she’s viewed it not as a curse rather as a motivating factor to live her life to its fullest. She was seen through her rough childhood by her very supportive family.  And in that time she became very acquainted with the different facets of herself – personae if you will – that help her get through the rigors of the various activities she finds herself doing.

From being a guest columnist in the Guardian, to writing for Gulder Ultimate Search,  to The Apprentice Africa as well as Amstel Malta Box Office 2 and 3. These were her most laid back days – long before her life before her work behind the microphone.

She says of her motivation for being on the radio daily, “I get on the radio every day with one prayer ‘Dear God, please help me make someone happy today’ “

How did it begin?

She says, “I heard a new radio station (Top Radio) was starting, and I walked in there looking to get 1 hour for s.h.a.r.e. and next thing I know, I’m walking out of the meeting with a job offer to anchor the morning show.” Only momentarily flustered by the new found responsibility, she quickly drew up an outline and the rest is history, as in less than 18  months she has garnered a teeming number of fans, who call in daily – whether it’s to say hello to Lagos in their native languages or to give Area traffic reports. 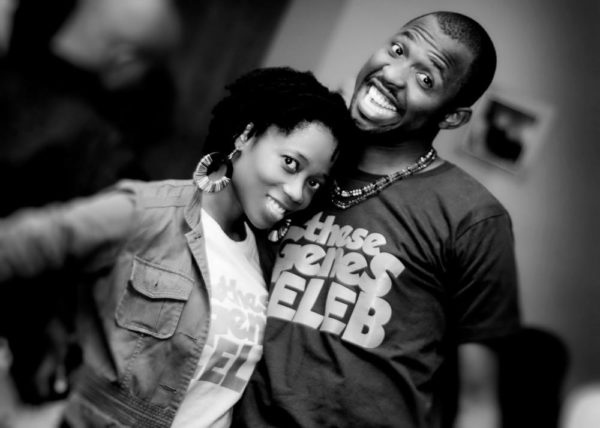 “there are some of us, who are thinkers, and others who are doers… the things I do are my way of moving from thinking, to actually doing…“

Single handedly, with her These Genes platform, she put a smiling face behind the ill-publicized disorder. She began the project in December 2007, with the aim of getting Nigerians to talk freely about sickle cell as well as offer support to families and people with “these genes”.

With s.h.a.r.e (Souls Have A Right to Express) – the most notable of its feats being the recurring Sundays At The Bay. At it’s very beginnings, it was the watering hole of most of the mainstream acts as we know them now – at a time when they were still very much just emerging acts.

Finally, meet the singer in her would not mind being compared with Alanis Morrissette. Her genre of choice is what she’d like to call Alternative music. Already with a video and two singles behind her. She deviates from the norm with her kind of music, but doesn’t seem perturbed by it.

What next? “It’s definitely TV” she says. And it’s not just her appearance in Tinsel (which aired yesterday) but a TV show discussing salient issues – much like Oprah and even Tyra Banks.