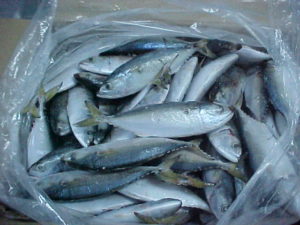 I hate the smell of mackerel fish. Not because of its pungent odour but because it reminds me of our days being broke. For a little over half a decade, our fridge was always stacked with a paint bucket of Okra soup with Mackerel and Mackerel stew.

On a luxurious day, it would be “Adesi Aden”; Palm oil rice.  An upscale version of the boarding school contraband staple where the rice would be cooked with a boiling ring then drained and mixed with palm oil, seasoning cubes, curry powder, dried thyme and tinned sardines.

At home though, we would fry the onions, crayfish and dried pepper in bleached palm oil and then stir in the boiled rice, before garnishing with flakes of smoked Mackerel so our yellow and sometimes orange looking “Adesi Aden” didn’t feel naked whilst you got teary eyed from the kerosene stove fumes.

We had meals twice a day. Breakfast and the other meal. You chose when you wanted to eat it. The other meal I mean. It only came in three choices. Rice, Garri and Beans. My options were relegated to two because beans for me induced a chronic acid heartburn which set my chest alight. Somewhere in-between, I always gate crashed a neighbour’s house during their lunch or dinner time. So I was that person you never asked out of politeness “Please join me” because I probably would.

I remember the summer of 99. We got twenty naira for breakfast everyday. Well what we really called it was morning food. You had the option of purchasing a twenty naira fresh loaf of Agege bread which would be accompanied with the flaky Mackerel stew in the fridge or go for a smaller ten Naira loaf so you had a spare ten Naira to acquire an egg. I didn’t eat that summer. I had worn the same day wear and class uniform in form four and five. My skirt had so many holes from nails in our class seats that I tied a cardigan around my waist for over a term. The underarms of my olive green school shirt had frayed so much that all my attempts at cross stitching and tacking became a weekly waste of a threaded needle. The armpits of the shirt had morphed from a dark brown to black, from an amalgam of perspiration and cheap deodorant.

So I didnt have any morning food in the summer of 99. I did what I had been taught in form four Economics class. It was termed opportunity cost. We were taught that scarcity necessitates trade offs and the trade offs result in an “opportunity cost”. The opportunity cost is what must be given up for the next best alternative as a result of the decision. I saved up my twenty naira morning food money from July to September and purchased fabric for a new school shirt, skirt and red chequered day wear from the railway market in Agege. Someone at school was nice enough to lend me their spare Sunday White and my mother rustled up some money to pay the tailor.

Other interesting things happened during that time, like lapping a friend on the commercial bus from Ibadan to Lagos because they were paying for the bus fare. Two hours of pins and needles or muscle cramps was never easy but after doing it a fair few times, I got used to it. I still have the scars from the edges of rusted bus chairs ripping the skin on my legs open. There were other decisions too, pocket money or provisions, borrowing text books and collecting the absolutely necessary ones from the school bookstore so that the left over allowance could be deducted from your second term school fees. My friends and I chuckle about it all now. They have termed it my gangster days but they laugh more at the fact that I spent a lot of time crying in corners and singing to myself. My best friend says “but this babe, you were a bit strange and quite weird in school oo”. I was overly sensitive too.

A colleague at the office once asked me if I ever felt embarrassed taking public transport as I had been living in England for eight years before coming back. Another asked if I felt self conscious being seen by my returnee friends hopping on a bike.

I reckon I wasted a lot of my youth being angry, insecure, self loathing and wallowing in unreasonable self pity, because after July 2000, I faced bigger challenges and scaled through. Sometimes I tell myself I have attained two degrees in the process. The first issued by a formal institution was a BA(Hons) in Journalism and the second an MA in Life attached with minors in resourcefulness , perseverance and sustainability. “Your eyes doesn’t chook for anything” my mother tells me. It’s the one aspect of my character she confesses to like. I think at times I forget I don’t have some things. My older brother pokes fun at me and believes I have “poverty mentality”. It’s not intentional but I just don’t attach much value to whatever it is that can come and go.

I like the scars on my legs, though they are fading now, they all tell an interesting story. I have accompanied them with tattoos on my wrists and I laughed when someone once called me a walking epistle. I’m still not very fund of Mackerel fish but I’ll eat it if I have to. I would much rather get my essential fatty acids from alternative sources. To be honest I just get on with it and I was always told, in the end it is all artistic license.