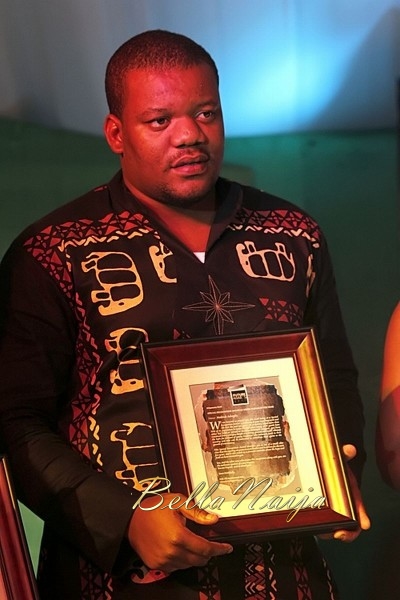 It was an evening of celebration and advocacy at the Landmark Village, Oniru Estate, Victoria Island, Lagos, on Sunday 30 January 2011 as the crème of the Nigerian youth converged to celebrate their peers who have excelled in their respective professions. It was the 6th edition of the Future Awards, the most reputable platform for recognition of the brightest and best of young Nigerians working tirelessly round the year to make laudable impact on humanity in Nigeria and the world.

BN Editorial Assistant, Gbenga Awomodu was at the event and tells us about his Future Awards 2011 experience.

The red carpet event kicked off some minutes past 5PM and had a colourful parade of latest fashion and diverse personalities; from the strictly formal to the casual native and the utterly weird. It was altogether a mind blowing experience with a rare opportunity to meet up with old friends and those virtual “friends” you perhaps had only met in online chat rooms and stalked on social networking sites. There you got to put a face to popular names and shake hands with those faces you mostly see on the TV and on the glossy pages of magazines – Tosin Otitoju (Young Person of the Year 2006), Esther Agbarakwe (Climate Change activist) and Nnaemeka Ikegwuonu (Rolex Laureate) made my red carpet experience worthwhile.

After about two hours of networking and interviews, it was time to go into the auditorium for the main course. The troika of Ego, Tunde Obe and ChiDynma, started off with a powerful upbeat version of the National Anthem. ChiDynma’s strong vocal power stood out along with the live piano accompaniment, which made my day. I felt proud to be a Nigerian and the ovation that enveloped the auditorium proved me right. It also felt cool being on the VIP section. Other highlights of the evening include the presentation of awards, the keynote address by Olusegun Aganga, the Minister of Finance, Chude Jideonwo’s passionate speech and Adebola Williams’ deft handling of the presentation of the Young Person of the Year Awards. I think he did a good job at making every finalist feel like the winners they truly are! In his speech, Olusegun Aganga, a former Managing Director with Goldman Sachs and Founder of the Nigeria Leadership Initiative, appreciated the efforts to make a difference exhibited by the youths awarded and entreated the others to continue to work towards personal achievements and nation building. He affirmed that he had been impressed as already promised by Oby Ezekwesili and Ngozi Okonjo Iweala, who had spoken on the same platform in the past. 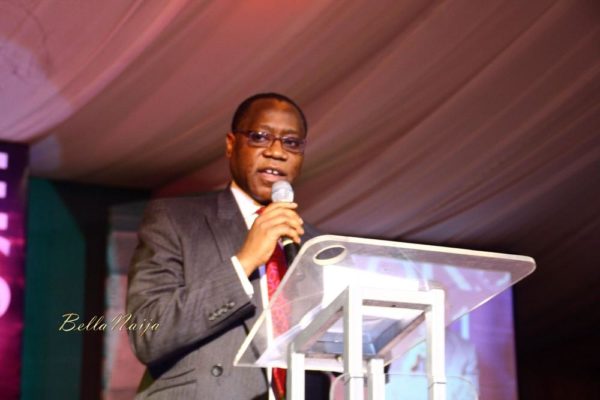 While the seemingly impatient young audience murmured and even clapped their hands (as to send a signal to the articulate technocrat), they embraced the Creative Director of The Future Awards, Chude Jideonwo’s highly dramatic, yet earnest and heartfelt, speech. It underscored the awareness of the grave consequences of colossal failure in government and misplaced priority in most Nigerian companies’ CSR drives vis-à-vis the overt materialism which continues to impede many wealthy Nigerians from strategically giving real hope to the less privileged (youth) in the society. He gasped, he sighed, but he never stuttered a bit in a tenacious and evocative, yet fluent and charismatic, style. “It is no longer cool to be disinterested,” he said as urged leaders to realize the pertinent challenges of being a youth in Nigeria. “Put your money where your mouth is!” He had made his point! I and many other guests could not but stand after such a piercing rendition of truth! A lady sitting across the table exclaimed: “This guy is the future!”

All the winners are aged 18 to 31. “Every year, we continue to make the point that we are not one of those people who say Nigeria is a great country as a cliché,” says Adebola Williams, who is the event’s operations director. “We are ready to show anyone that there is a new generation that has integrity, that is not corrupt and that is ready to build this nation. We are proud, immensely proud to present a group of scientists, artists, entrepreneurs and others who are ready to make contributions towards the development of their country.” 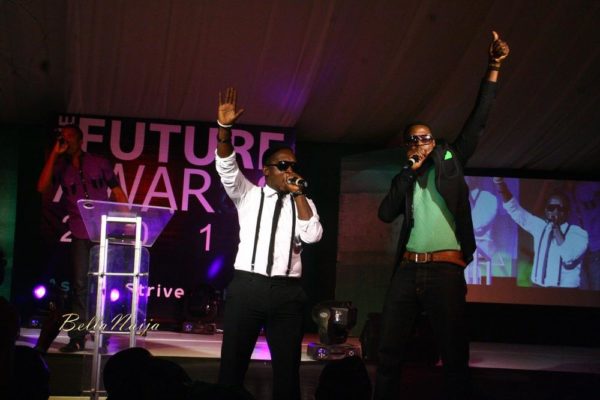 Popular acts unleashed their anger and socio-political concerns, giving the usual regular club stuff a wide berth, while focusing on more poignant societal issues at hand. It was serious business as Lara George embraced the live band to perform her track on unemployment. Introduced by Uche Nnaji’s reminder of the comatose situation of power in Nigeria, citing the death of a family of thirteen as a result of fumes from a power-generating set in 2010, Chibuzo, Soundsultan and M.I. performed the track – “2010” to remind all present that it was past 2010 and there still is no constant electricity. It was indeed a stage display of creative anger! Next up was Banky W, who also won an award for Musician of the Year, who stepped up the tempo further. Performing “Why?” an exceptional song inspired by the recent killings in the city of Jos, he maximized the use of the live band and a power-packed back up, with which he modulated up to six times. Though I think it might have been overdone, the accurate change in keys confirmed to me a musically sound artiste who has found good partnership with Cobhams Asuquo, the producer of the song. “Can you tell me why… we don’t try to live… in U-N-I-T-Y”. I am impressed by this ascension in musical maturity and lyrical depth.

It was a surprise moment as Nnaemeka Ikegwonu, a 28-year old man from Nkwerre, Imo State, a Rolex Young Laureate and founder of the Smallholders Foundation was announced the winner of the biggest prize. Nnaemeka, an Ashoka Fellow, won the Rolex Award in 2010 for his radio outreach programme which is already broadcasting 10 hours daily to 250,000 listeners on Smallholders Farmers Rural Radio by establishing a communications network reaching 3.5 million farmers in almost 5,000 villages in his own region, Imo State, in south-east Nigeria. He won the Young Person of the Year Award in a category that also had Music Producer and Entreprenuer, Don Jazzy and Screen Diva, Genevieve Nnaji. Other finalists in the category include Ojoma Ochai (Assistant Country Manager, British Council); Uche Eze (New Media entrepreneur); Makinde Adeagbo (Senior Software Engineer with Facebook); Debo Olaosebikan (Scientist), Nneka Egbuna (Musician); Blessing Okagbare (Athlete) and P-Square (Musicians).

The event, which was co-hosted by the duo of Yvonne Ekwere (Silverbird TV) and Ebuka Obi-Uchendu, as well as Dolapo Oni (Studio 53 Extra) and Dr. SID (musician), also had an ‘Aspire Viewing Centre’ where secondary school students, usually below the age of 18, had a feel of the awards ceremony from an adjacent location. These younger ones are expected to be motivated seeing their role models honoured, thus making meaningful impact especially in those early years. Some of the dignitaries and guests were Prof and Dr. (Mrs) Pat Utomi, Chief Dele Momodu, Mr. Tonye Cole, the Deputy Governor of Ekiti State, Richard Mofe-Damijo (representing the Governor of Delta State), Bene Uche, Patrick and Iretiola Doyle, TY Bello, Ayo Animashaun, Omowunmi Akinnifesi, Eku Edewor and Omotola Jalade-Ekeinde.

You can watch part of the event, which was streamed live on the internet courtesy of Paradigm Initiative Nigeria (PIN) on http://www.ustream.tv/channel/tfa2011. The event was supported by Access Bank, HiTV, Virgin Atlantic, the Miccom Golf Resorts, O’naphtalli, Y! (www.ynaija.com), Cool FM and Wazobia FM.

Actor of the Year
Mercy Johnson

Best Use of Advocacy
Muideen Salawu

Best Use of Science
Debo Olaosebikan

Best Use of Technology
Tolu Iruoye

Comedian of the Year
Seyi Law

Designer of the Year
Bridget Awosika

Journalist of the Year
Tolu Ogunlesi (NEXT)

Magazine of the Year
FAB

Musician of the Year
Banky W

Music Producer of the Year
Sossick

Sportsperson of the Year
Vincent Enyeama

Team of the Year
Falconets

More information on the nominees is on www.thefuturenigeria.com.

Muyideen Salau (Best Use of Advocacy)

Iroye Tolulope (Best Use of Technology)

So Sick (Music Producer of the Year)

The Future Awards 2011 - Business Owner of the Year - Bode Pedro 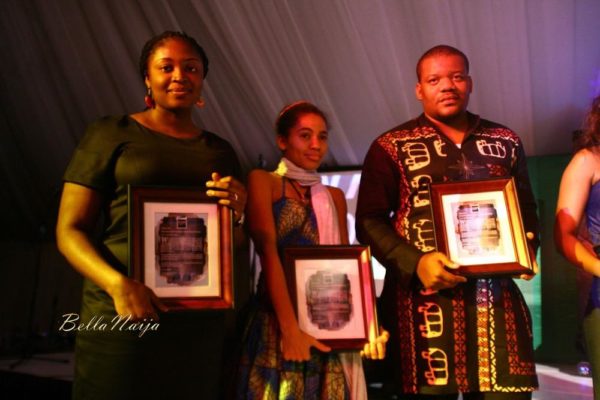 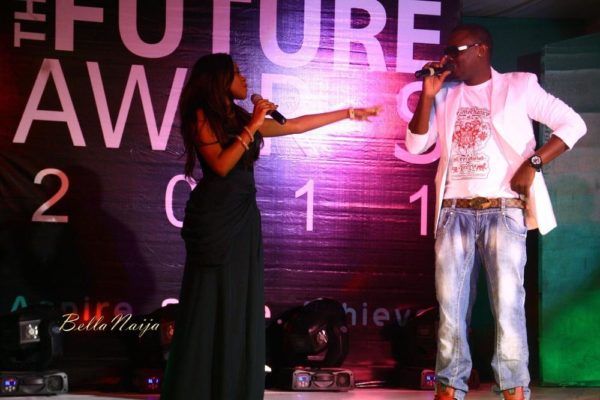 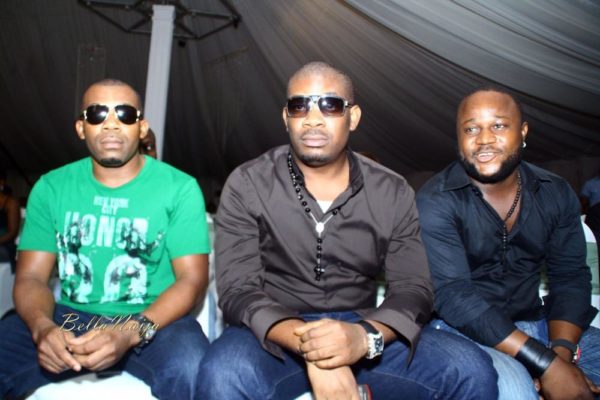 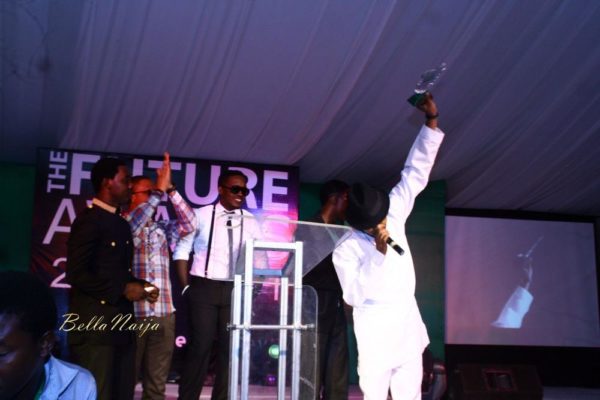 Banky W dedicates his Musician of the Year award 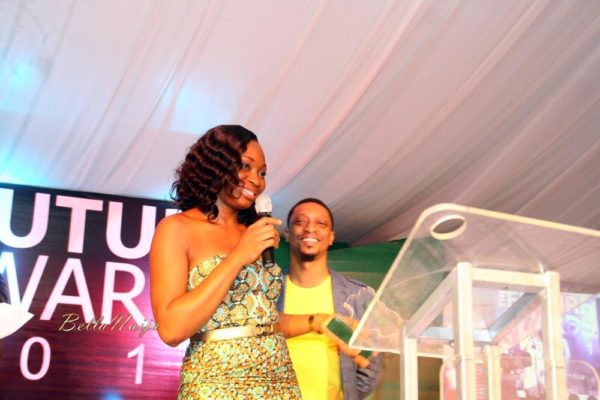 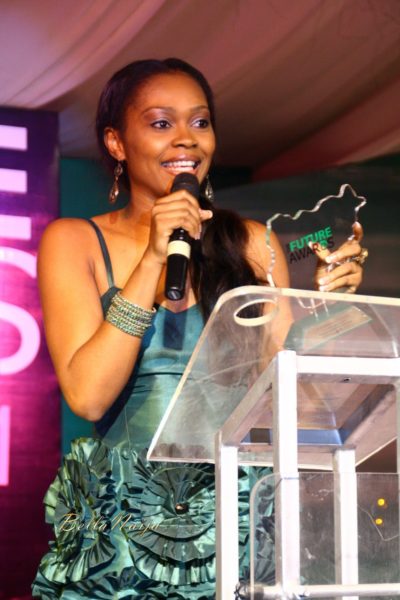 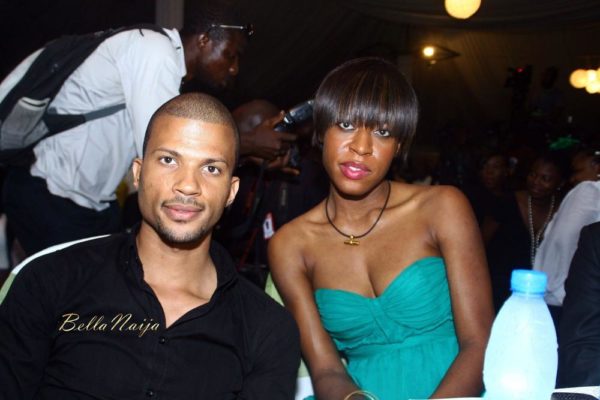 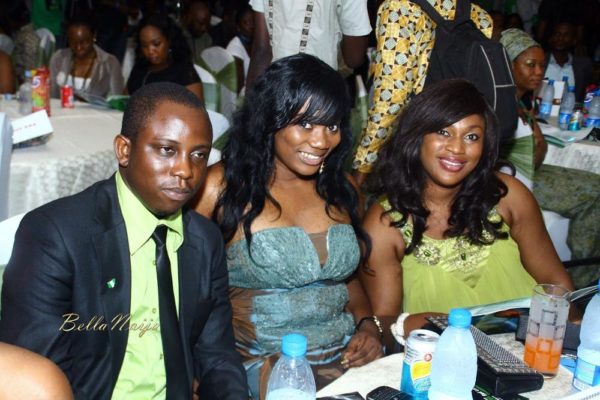 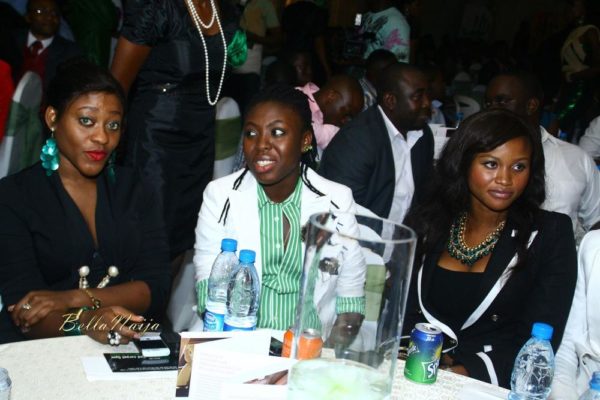 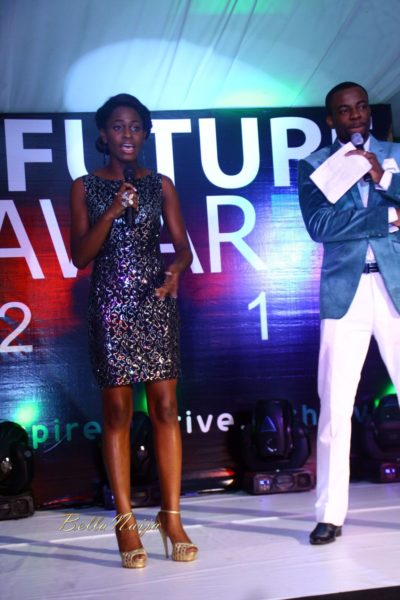 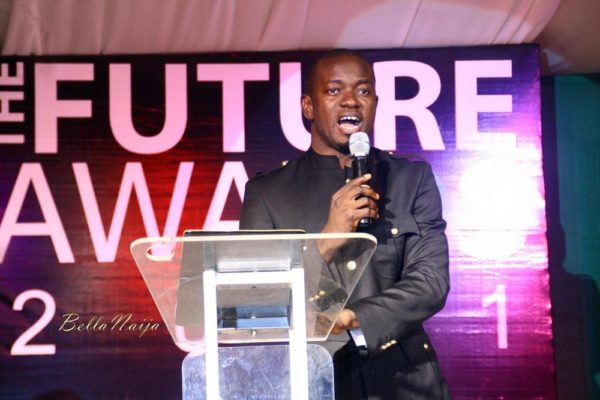 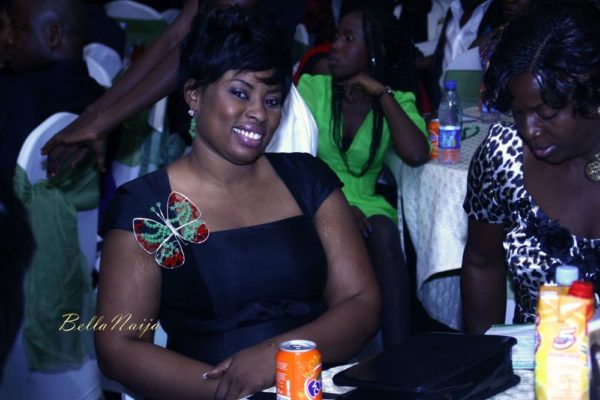 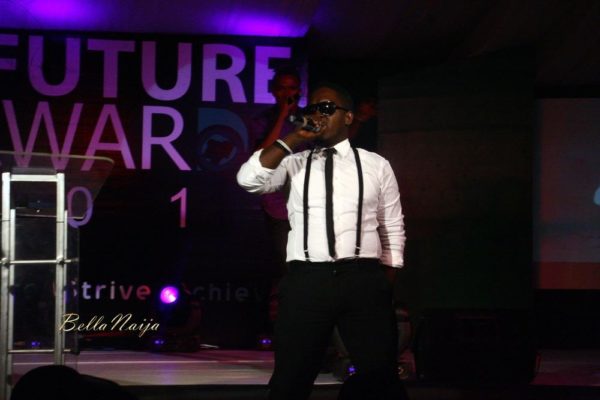 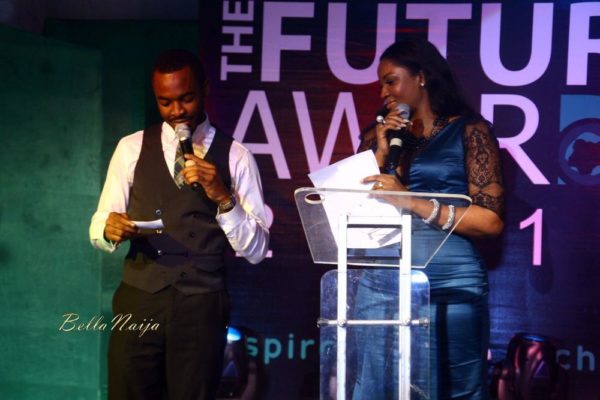 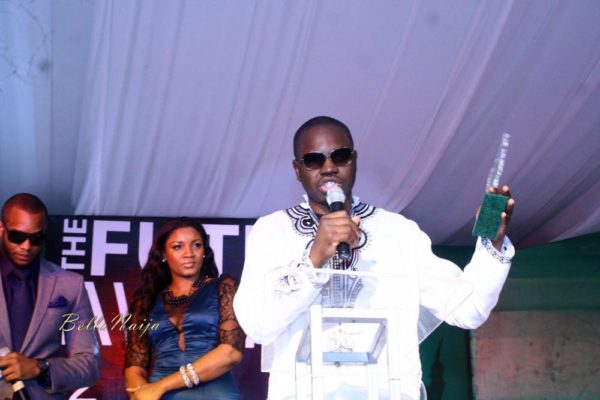 Debo Olaosebikan (Best Use of Science) 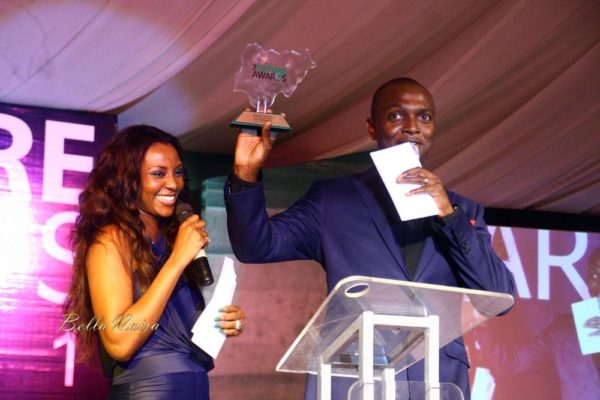 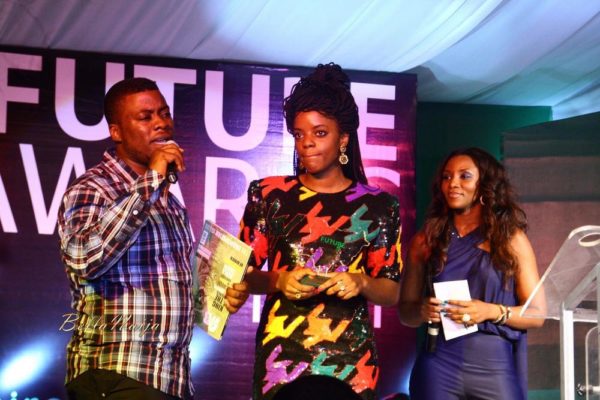 The FAB Team (Magazine of the Year) 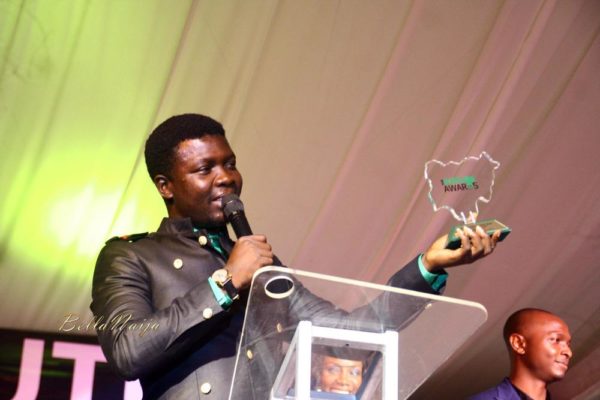 Seyi Law (Comedian of the Year)

BN Bytes: Denrele strikes a pose for On Point Clothing