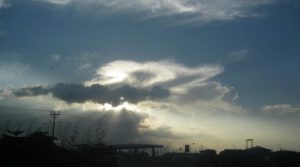 The ancient city of Ibadan didn’t seem to notice the day my first son, Adewale, died. The city was as busy as ever. Cloudless skies hung blue above the city as people went about their business. In the compound beside the hospital where my son died, a couple was being joined in a very loud traditional wedding ceremony.

The sounds coming from their loudspeakers almost drowned the doctor’s voice when he came to tell Dele and I the news. When he said “I’m sorry”, it sounded like “I’m coming”, but he still stood there and I wondered what he meant. But when he said “He is dead”, the words rang clearly and my sorrow, heavier than my weight, fell together with a thud on the cold terrazzo floor.

As we left the hospital hours later in the rickety station wagon, Baba Femi, our landlord was kind enough to lend us, I wondered why the people on the streets didn’t notice that my precious son had just departed this world. They just carried on as if nothing happened. One bright-eyed boy, about the same age as Adewale, thrust a loaf of bread in my face but quickly retrieved it when he saw the look on my face.

“Gbemisola, Gbemisola!” Dele called beside me. I turned to look at him. He hadn’t cried yet but I knew the tears hung heavy in his eyes and would fall soon. He preferred to cry when he was praying.

“Maybe we should take all the children to the mountain this time,” he said, turning to look at me briefly. “We need to cast out the familiar spirits that have been disturbing them.”

Dele hadn’t always been religious; in fact, he had been too proud to succumb to God when I first met him. As a school teacher, he felt he knew everything. Especially, more than the ‘preachers who prayed out loud for people and then begged for money’, that was the way  he described them.

I recalled what attracted him to me fifteen years ago. I had just completed my secondary school and was trying to make a decision between hair dressing and tailoring. ‘Fashion designing’, as is the popular term for it today. But after meeting Dele at a party, which I had snuck out to attend, all thoughts of fashion vanished. He had this aura of confidence around him and I hung on his every word.

He wanted me to be a nurse, and a nurse is what I became. Not that I went to any nursing school. Dele, with all his big words couldn’t afford to send me to school, and I was soon pregnant with Adewale. So between breastfeeding one child and getting pregnant for another, I learnt how to give injections at a local hospital and recommend Paracetamol and Chloroquine for a patient with malaria.

But when the children started falling sick and the doctors could not understand what was wrong with them, he listened to the preacher from the Apostolic church who rang his bell on the street every morning.

“Familiar spirits are disturbing your children,” the preacher said after praying rigorously for over an hour in our dingy one-room apartment. “You need to fast and pray on the mountain to chase them out.”

Dele and I took turns to go to the mountain to pray for them, but it seemed the longer we prayed, the more they fell sick. Sometimes they all fell sick at the same time and I wished dearly that I could take their pain, and they, my strength. My children were young, but they looked older than their ages. All four were frail, all four were slow, and I began to wonder if God had put a curse on me.

“We must pray harder.” Dele said beside me, his voice sounding very far away. “We must not relent.” He sounded just like the preacher with the loud bell.

And so five months after Adewale’s burial, we took our children, now three, to the mountain. We left Ibadan for the prayer mountain in Ede, Osun state the day Bolade turned 11, the month Adewale was to clock 14. Three-year old Janet was strapped to my back for most of the journey while seven-year Jide clung to his dad. The rain that poured on that fateful day in July 1990 seemed to be on a vengeance mission and the journey was most uncomfortable for us all.

By the time we got to there, all three of them were sick and didn’t have the strength to climb the mountain. We had to take shelter in a church at the foot of the mountain and I couldn’t decide which was more uncomfortable, the hard benches or the leaking roof.

“I’ll pray for all of you. It’s good that you are here. God will hear our prayers,” Dele said before he left, but his words did not sound reassuring.

Sometime in the middle of the night, as the sounds of many prayers floated down the mountain in different pitches, Bolade cried out of his sleep. “Mummy, my bone, hit my bone, shake my bone,” he cried, clutching his right leg in pain.

This was not the first time or the first child to do this. Dele and I took turns at night when any of them complained of this sort of pain. I couldn’t understand why they wanted us to tap their bone continuously or why they cried when we stopped. But it was what they wanted and we had to oblige. All trace of sleep evaporated as I kept vigil on Bolade’s leg.

When Dele came down from the mountain, he announced that he had a vision. We should leave Ibadan and relocate to Lagos. We had to leave the evil spirits behind and move to a new place.

We left for Lagos without returning to Ibadan and quickly found a single-room apartment in Mushin. Life was hard with all our money spent on rent and drugs, but we managed. For a few months, it seemed all was well, until Jide fell sick. This time around, we went to Lagos University Teaching Hospital (LUTH), where he was admitted. After examining him and running some tests, the doctor said he wanted to run some tests on Dele, the other children, and I.

Dele replied the doctor quickly. “We don’t have HIV. We’ve already done the test and we are negative.”

The doctor, a young, round man just fresh from medical school replied Dele like he was talking to a child. “Do you know your genotype?”

The tests revealed that Dele and I were AS, carriers of Sickle Cell and our three children were SS, sicklers. After the doctor explained to us why our children were SS and the implications of it, I felt both angry and relieved. Angry that our ignorance was the cause of our children’s problems and relieved to finally know what was wrong with them.

But my relief did not last long. Jide developed more and more complications and ended up spending three months at the hospital. From one blood transfusion to another, one infection to another, he became so weak until he could take no more.

One Sunday evening, after my son’s body had been drained of all strength, he breathed his last. This time around, the clouds that hung above the city noticed and cried heavily with me.

Sickle cell anaemia is an inherited genetic condition in which there’s an abnormality in haemoglobin, the oxygen-carrying protein found in red blood cells. People with sickle cell anaemia have a type of haemoglobin known as sickle haemoglobin (HbS), which is different from normal haemoglobin (HbA). They are then less able to squeeze through small blood vessels. These small blood vessels easily become blocked, preventing oxygen from getting through and causing severe pain and damage to organs.  For more information on this condition, as well as information on support groups, advisory services and treatment, please see the following links; www.sicklecellfoundation.com and www.bbc.co.uk/health/physical_health/conditions/sicklecell1.shtml

“How Stupidity Saved My Life” by Okechukwu Ofili